Addressing the seven elephants in the driver shortage room

MISSISSAUGA, Ont. — A panel discussion last week on the driver shortage took a refreshingly honest tone when discussing the role of Indo-Canadians and women in trucking.

Moderated by Mike McCarron, founder of MSM Transportation, the panel took a “macro approach” to the driver shortage, discussing the usual suspects: the image of trucking, EOBRs, mandatory training, recruitment and retention. But it was the time taken during the 90 minute discussion to dig into the various, as McCarron said, “elephants in the room,” that set the panel apart from others on the same topic.

Elephant #1: Is the driver shortage a friend or foe for carriers?

“How motivated are the owners in finding drivers?” McCarron asked. Trucks are full, rates are going up and capacity is good. “Is that demotivating transportation companies from solving this problem?”

“The situation is preventing people from growing organically, thus the reason I recently did what I did,” Seymour said, referring to the recent Kriska/Mullen venture.

According to Seymour, the challenge for most carriers is to seat their unseated trucks and maintaining discipline when it comes to adding capacity.

“The reality is if you can’t seat the unseated trucks you have, why in the hell would you buy more when they’ll just join that unseated group?”

In fact, it all comes down to discipline for Seymour. “We can use this as an opportunity to do some much needed repair on rates and balance sheets, but at the same time I think we need to leverage the positions we have with our customers to be kinder and gentler and more compassionate to our drivers. We had three driver pay increases at Kriska this year alone – three in 12 months – that’s unprecedented. What we have said is we’re going to get more money from the market and we’re going to share it with our drivers.”

Asked if given the opportunity to re-think his decision to become a driver, would he do it again, Broderick responded “in a heartbeat.” But the three-million-km accident-free driver said pay needs to be increased across the board.

Seymour agreed with Broderick on the pay issue, but added that people don’t leave Kriska because of pay.

“I don’t think money is the reason people come to us or leave us, but we are increasing pay to compete. What we don’t do traditionally, and I hope it happens in my lifetime, is that we move to an hourly-based pay where people get paid for every hour they work and if there time is wasted on the road in an accident or in traffic, they are still getting compensated. We don’t have that system right now, which I think is a flaw that exists.” 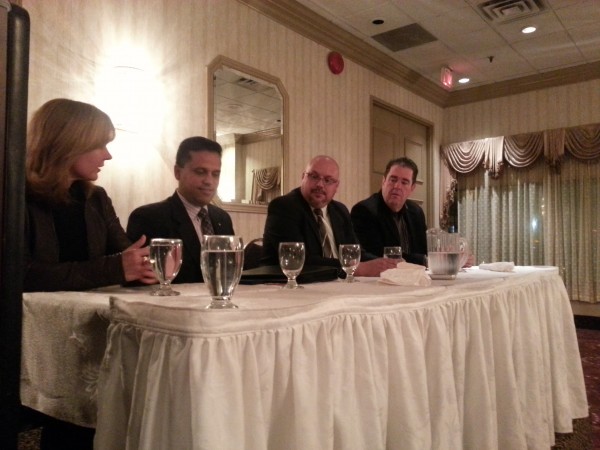 Still, Seymour said most people leave around issues of lifestyle. “A regular, over-the-road driver is gone for a long time and that presents many lifestyle issues – family issues.”

It brought up the issue of “total compensation,” something that Splinter said is starting to emerge.

“So it’s not just hourly wage, but looking at everything you offer your drivers — your benefit plans, vacation time, employee assistant program, RRSPs, pensions – putting that all together and presenting it to your drivers. That’s a trend we’re seeing. In trucking in particular, there are so many variables so it’s hard to determine what you are paying them, but we are seeing that trend to towards total compensation,” she reiterated.

The other problem, said Seymour, is the fact that “it takes a couple of days of training in the city to get your licence and you are no less accredited than somebody like Guy with three million kilometres of accident-free driving under his belt. That’s what’s broken about driving a truck. You need to work your way to the point you have designation,” he suggested. “Whether it’s Gold Seal or Super-elite or whatever it is – Guy deserves to be viewed and paid and respected more than somebody who got their licence yesterday.”

“We booked this event thinking we would get a lot of Indian participation,” McCarron explained, “but we didn’t realize it was Diwali.” Diwali is an ancient Hindu festival celebrated over a five-day period. “Today is like Christmas for Indo-Canadians,” said Gupta.

“That’s one of the big challenges we face: lack of recognition of things like statutory holidays or even just greeting them when they walk in the door in the morning,” commented McCarron.

“There is a missing link,” Gupta said. “I don’t know how many of the fleets that have Indo-Canadian employees extended Diwali greetings today – I didn’t see any major tweets or Facebook updates.”

Seymour said that this was the first year Kriska sent out a fleet-wide message in both English and Punjab.

“We had samosas at all of our terminals today. Little things make a huge difference. We’ve never done it before but we have a very large population of Indo-Canadians. We celebrate Christmas and have Christmas parties and all sorts of things; we need to be equally respectful of the Indo-Canadians.”

“We’ve hired 10 people this year,” explained Douglas Kimmerly, president and CEO of DSN Chemical Transportation, Mississauga, Ont., after the presentation. “Seven or eight of them are new Canadians. We’re not targeting a specific group; these just happened to be the best people to hire.”

Asked how his company has been weathering the cultural differences in light of his new hires, Kimmerly said that earlier in the day they had a meeting where people stood up and explained Diwali. However, “it’s not really a cultural challenge – it’s a chance for us to enrich our own culture.”

“I hear things like ‘low rates, don’t follow the rules, bad equipment’. A lot of Canadian truckers would put a lot of blame for low rates on the Indian trucking community. Is there basis for that,” McCarron asked Gupta.

“There’s no basis for that,” Gupta responded. “You will find people of all backgrounds lowering their rates, running unsafe trucks on the road – it’s not only Indo-Canadians. Every community has some bad apples. Indo-Canadians are so large in numbers you will see more examples of those things — especially in the GTA and Peel Region – but it is not only them.”

Gupta added that culturally, Indo-Canadians are “very entrepreneurial and that is why they are making their mark in much more visible numbers. In the next five years, you will see most of them in decision making positions.”

“How much is racism involved in this,” asked McCarron, adding that he was “blown away” by a recent meeting with Sikh truckers who explained what they face on the road.

“It’s definitely a big obstacle,” Gupta acknowledged. “I believe the industry should be welcoming to everybody, but it’s also how the individual conducts themselves as well. Respect is a two-way street -you give respect, you get respect – and many times I’ve seen newcomers that don’t earn that respect. They feel that they are the kings of the road.”

As a driver-trainer, Broderick said that potential new hires have said to him “I don’t know how to describe that part in your language.”

That’s a big problem if they get stopped at inspection stations, he stressed.

“They can’t explain, ‘Yes, I did check my brakes, my fifth wheel, my landing gear, here is my dangerous goods paperwork, everything is all up to par.’ That is probably the biggest thing – the language barrier.”

Splinter said research shows that language is the number one barrier for foreign workers. “If they are coming into fleets, maybe take that initiative to give them that training,” she suggested.

Elephant #7: Women in trucking and learning about respect

Trucking HR Canada has been working with employers on recruitment and retention of women, explained Splinter. “We surveyed women working in the industry on barriers to entry. We have some rich data.”

The key data points? At the driver level, Splinter said women are concerned about safety issues: “danger on the road, not wanting to be alone in their truck at night at truck stops, bathroom and shower facilities that weren’t female-friendly,” Splinter listed off. “From other women at other levels, issues around compensation – that’s not new and probably keeping with what we’re seeing in other industries.”

Trucking HR is developing an “action plan,” Splinter said. One of the initiatives that is set to come out of the action plan is a national leadership summit “that will bring together not just women but men as well and look at some practical approaches.”

In the meantime, there are lessons to be learned. In what he apologized for being a “bold and uncensored example,” Seymour told the audience about a female employee that was denied the use of a customer’s washroom.

“We took the initiative to demark the customer and said if you aren’t going to let our drivers, men and women, use the facilities, we’re never coming back.”

As more women enter the industry, an evolution is taking place, Seymour explained. He pointed to how Kriska now changes the mattress in a truck every time a new driver takes it over.

“I think most guys wouldn’t have a problem sleeping in other guys’ mattresses. Women have a higher standard and higher expectations – and so they should. Every time we issue a truck to a new driver, we put a new mattress in it because that’s what our women drivers expect and deserve. But we’re not going to do it gender specific, we’re going to do it by and large. I think women are teaching us a lot about respect that we didn’t figure out on our own.”