CALEDON, ON — If you just work nine to five and typically shun the after-work social networking scene with a shoulder shrug or lame excuse, you may be missing out on valuable tools that could be advancing your career or simply making your job easier.

Most of us work around the same people every day, often developing routines that can be hard to shake. But if you can try breaking out of the rat race, Delta Nu Alpha Transportation Network director Jennifer Pylypiw says that’s the time you can shine. When the clock strikes 5 p.m., afterwork fellowship can do more to define an employee as a person, she says, and that will enrich your career. 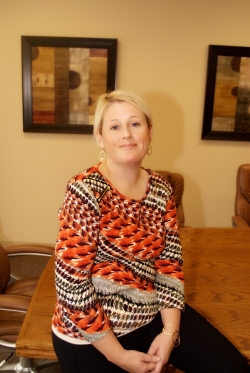 “If you’re only working nine to five, you’re really missing out on the industry you’re working in,” says Pylypiw. “It’s about the work life and the personal life coming together, and you making a personal investment.”

Calling someone up on the phone doesn’t have to mean dusting off an old business card and dialing with a nervous lump in your throat. These reconnections are much easier and rewarding “if we know who our people are,” says Pylypiw.

“You want to be one of those people who says, ‘I know a guy who knows a guy.'”

When she’s still on the clock, Pylypiw, 42, works in finance for Brampton, Ontario’s Directright Cartage 2001, founded by entrepreneurs Paul Enright and John Farrugia in 1982. Pylypiw started more than 13 years ago at the company with some bookkeeping experience, but she’s since worked hard to advance her skills, and now wears several hats in finance. She’s set on achieving a CCLP logistics designation through the Canadian Institute of Traffic and Transportation, which the Delta Nu Alpha is once again supporting through various funding.

Beyond supporting students in academics, the Delta aims to keep its own membership up-to-date on the latest regulations and other notable updates within the industry. Lunches, dinners, or other special outings are perfect opportunities to network. Networking at the Delta’s events has given Pylypiw opportunities to do some magazine writing, as well as hire brokers, shippers and lawyers for Directright Cartage, she says.

“It’s really the support of my company here at Directright Cartage that allows me to be a part of something like Delta Nu Alpha,” says Pylypiw. “They’ve put their faith in me right since the beginning.”

Not only are groups like the Delta good for networking, Pylypiw says they can also serve as opportunities to learn from the cautionary tales of others, or maybe even discover a bad-apple business or a worker that may be best to avoid.

There are several transportation social networking clubs in the Greater Toronto Area, with some people even part of more than one club. The Delta’s group is a smaller one, hosting about 90 active members. Often, after large non-Delta industry gala events, Pylypiw recalls people asking, “Who was at the dinner?” The answer comes after a pause and eyes searching upward for an answer: “I don’t know, everybody?” offers Pylypiw, who says large events can get rather blurry when attendees can reach into the three-hundreds. The Delta hosts events about eight or nine months of the year. This is no boozefest. They have member feedback nights, but do host social events around activities like horse racing, to name just one example. The group also recently went on a walking tour that examined some of the darker sides of Toronto’s history.

“There are a lot of personal touches with the Delta. Minute details to make the people feel well-received,” says Pylypiw. “We make it more memorable because of our size, and they’ll always take something away.”

To enquire about The Delta Nu Alpha, visit www.deltanualpha.ca