TORONTO, Ont. – Spot market freight volumes declined for the second month in a row in August.

The 9% decrease between volumes moved in August versus those transported in July was recorded by TransCore Link Logistics’ Canadian Freight Index. This is the greatest month-over-month decrease between July and August since 2008.

Equipment postings also showed the most significant drop for the same July-to August time period, being down 6% last month. They were also 13% lower than the postings recorded in August 2013. The top equipment postings for August were dry vans (52%), reefers (23%), flatbeds (18%) and other (7%).

While the month-to-month freight volumes have been displaying a downward pattern—there was a 12% drop between June’s volumes and July’s— they do show improvement when looked at year-over-over. In comparison to August 2013, August 2014’s volumes were up 15%. 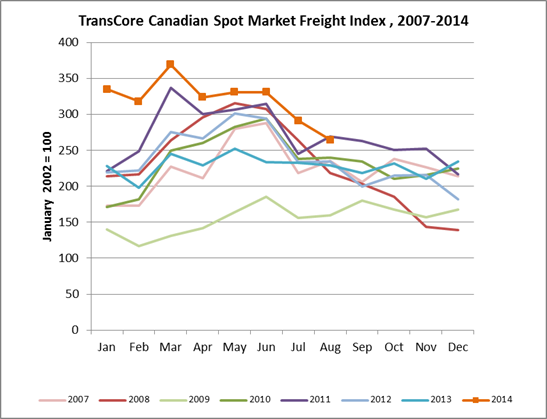 There was also a year-over year improvement demonstrated in the truck posting numbers, which decreased from 2.57 to 1.95, marking a 32% improvement. July’s figure, however was 1.89.

Other key figures recorded by the Index show cross-border load postings made up 68% of that data submitted by LoadLink’s Canadian-based customers. Ontario received 56% of the loads, Western Canada got 24%, Quebec was the destination for 17% and the remaining 3% went to Atlantic Canada. Equipment figures were very similar with 51% of equipment crossing into Ontario, 25% into Western Canada, 21% entering Quebec and 3% moving into Atlantic Canada.