PRINCE GEORGE, BC – Shane Reynolds, ops manager of Landtran Logistics’ Prince George facility, is becoming an old hand at helping people in distress. He was working in the southern 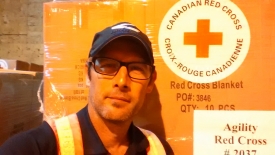 U.S. after Hurricane Katrina hit and was part of a team that salvaged and reclaimed warehouses and set up distribution centres for relief supplies.

Also, growing up in B.C., and then working around Fort McMurray, Alberta gave him ample exposure to the ravages of forest fires.

Now, he’s putting all that experience to good use again as Landtran and other trucking folks do what they can for victims of the British Columbia forest fire disaster.

Almost 200 burns have destroyed almost 80,000 hectares of central British Columbia already and as of Friday, experts were warning that strong winds predicted for the weekend will only make matters worse. Entire towns are have been evacuated.

“We’re storing 5,000 cots, 5,000 blankets and other material,” Reynolds said Friday, adding, “and we’ll be helping with local delivery of supplies when the Red Cross tells us what has to be done.” 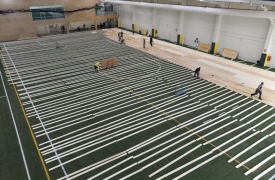 Most of the fire refugees in Prince George are from the Williams Lake and 150-Mile House, a few hours south of Prince George.

Landtran was one of the carriers that volunteered after the Red Cross reached out to the industry through the Trucks For Change Network (T4C), the British Columbia Trucking Association (BCTA), and the Canadian Trucking Alliance (CTA).  If you’d like to help out, contact Dalmazzi at pete@trucksforchange.org.

T4C also built a special web portal (click here) for anyone in the trucking industry who would like to donate money, all of which will go directly to the Red Cross BC Fires Appeal.

“Trucks for Change delivers vital support to the Red Cross during disasters. When wildfires broke out in B.C. in early July, Trucks for Change connected the Red Cross with warehouse space near the impacted communities,” said Kimberley Nemrava, Canadian Red Cross vice president – B.C. and Yukon. “That space is helping the Red Cross to quickly assist evacuees with shelter supplies like cots and blankets as these fast-moving fires force thousands of people from their homes.”

“The trucking industry,” added Canadian Trucking Alliance chairman Gene Orlick, “is once again showing its leadership, generosity and community spirit to help those in need. I encourage CTA carriers and the provincial trucking associations to get involved in this cause.”

Says Dalmazzi: “When something like this happens, it’s nice to be in a position to help.”

Meantime, six hours south of Prince George, Kamloops is also taking in thousands of forest fire refugees. The Red Cross needs help there, too, and Bandstra Transportation Systems was among the first to answer the call.

Earlier this week, a 53-foot trailer full of donations arrived from concerned citizens and do-gooders in Fort McMurray, Alberta.