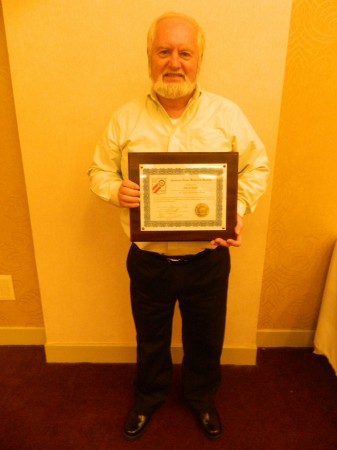 MONCTON, N.B. — For the attendees at the Atlantic Provinces Trucking Association’s Transportation Summit, things were going as expected for the second day of the event ­– a few informative morning sessions, followed by a lunch with more presentations to be had in the afternoon. But for David Black of Black’s Transfer, the day was anything but predicable.

After guest speaker and RBC Olympian Una Louder spoke about her journey to the Olympics, Jean-Marc Picard, executive director of the APTA made a special (and surprising) announcement.

Across the room, David Black of Black’s Transport, sitting with his wife, turned red as he got up to accept the award which is given to companies who have provided 50 years of dedicated service to the trucking industry. He was completely surprised as his children have kept the award a secret for months.

“We didn’t even tell mom,” said Dale Black-Devost, one of Black’s daughters who works at the company as the dispatch administrator. “In case she said something accidentally.”

David is the president and general manager of Black’s Transfer, a short and long-haul company that has been in business for half a century this year. He started the company himself in 1964 after working local trucking jobs. He has been in trucking since he was in high school and stayed in the business because of his passion for trucks and the industry. Today, Black’s (which is based in Saint John, New Brunswick) is one of the most recognized and successful companies in the Atlantic provinces.

“Right now we’re operating 17 tractors and 42 or 43 trailers of various makes and models,” he said. “It’s a real mixed bag as far as what we deliver. A lot of container work, through the port of Saint John, a little through the port of Halifax. A lot of flat bed and building materials like steel an lumber.”

It was hard for Black to muster up a few words after receiving the award but he said “it was a great honour and a big surprise” to him.

He received another surprise award earlier this summer from the Port Saint John called the “Port Award of the Year” after being a long time partner of the port corporation. It was the first time a trucking company has ever won the award.

As far as retirement goes, it’s not something Black is thinking about just yet since he says he still loves his job even though he has scaled back in terms of hours.

“I’m still really enjoying working,” he said. “That said, I certainly don’t work as hard as I used. I don’t turn the lights out anymore but I’m like a dog with a bone, I won’t quit.”