The new CNG station is located at 1611 Britannia Road in Mississauga, Ontario just off Highway 401 and Dixie Rd and is the largest public CNG fuelling station in the country so far.

The day saw more than 100 people gather at the new station to hear from key executives of the venture, along with local dignitaries who weighed in on the importance of reducing greenhouse gas emissions. Hosts of the event also gave demonstrations to attendees on how the fuelling station worked and how CNG will be ‘pumped’ by drivers. 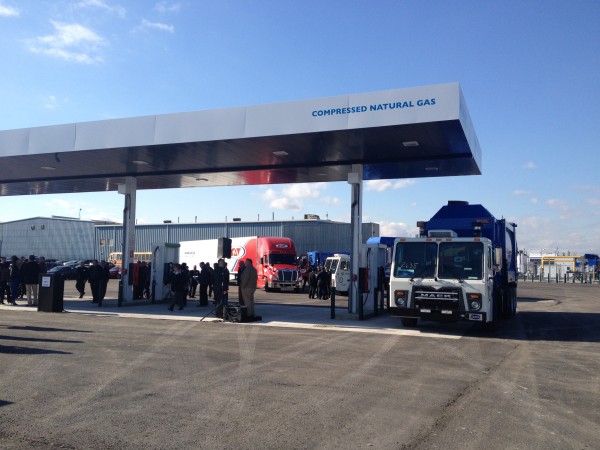 The new, state-of-the-art facility is the fourth and largest CNG station Emterra has invested in. The company opened a CNG station in Winnipeg back in 2012, one in Chilliwack, B.C. in May of this year and one a few weeks ago in Victoria, B.C. The company, which invested more than $50 million in the project, purchased more than 100 CNG refuse vehicles to serve the Peel region.

“(This) station will be open to other fleets and operators of CNG vehicles, expanding opportunities for the transportation sector in and around the GTA to go greener using a lower cost fuel, helping to make Ontario trucking businesses more competitive and sustainable,” said Emmie Leung, CEO and founder, Emterra.

C.A.T. also made the investment and purchased 100 CNG trucks recently to show its commitment to CNG.

“You’re going to start seeing these trucks on the road as early as January,” said Daniel Goyette, president, C.A.T. He added that C.A.T. has made arrangements with GAIN to open up another CNG fuelling station just west of Montreal next month. Together, to better service C.A.T.’s growing CNG fleet, they will also build stations in Scranton, Penn.; Charlotte, N.C.; and Laredo, Texas in the near future.

“This is our first station. Our second station will be opening up in November in Coteau-du-Lac, Que. just west of Montreal,” Marc-Andre Paquin, business development manager at GAIN confirmed. “Those two cornerstone stations will allow fleets from Ontario, from Quebec, from Canada, and from the United States to operate in one of the busiest transport corridors in Canada using CNG. This is going to have a direct positive impact on their businesses, on the communities in which they work, on the environment, and really using CNG is going to be the major reason why these same companies will be able to meet and exceed their transportation emission goals.” 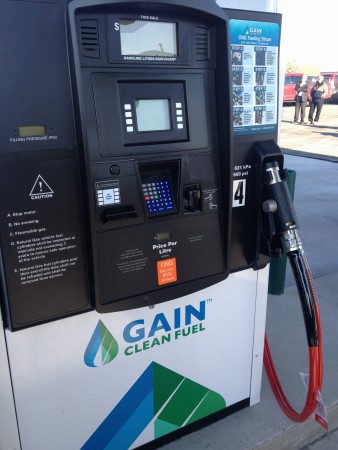 Paquin added that in one year, GAIN projects that the Mississauga station will use the equivalent of 1.5 million litres of diesel fuel – which represents a significant reduction in greenhouse gas emissions.

David Bradley, CEO of the Canadian Truck Alliance and the Ontario Trucking Association praised Emterra, C.A.T., and GAIN for its partnership in helping to make Ontario a greener province.

“Never before in the trucking industry’s history is our member’s economic goals been as aligned with society’s goals in terms of the environment, particularly with greenhouse gas emissions, than today,” he said. “There are going to be a number of challenges: infrastructure, getting people used to new ideas, pricing, all of those sorts of things. But I think today is really good example of what it’s going to take. It’s going to take partnerships. Our industry is not going to solve our problems, or reduce our carbon footprint on our own. We need to work with our suppliers, whether that’s equipment or fuels, and we need to work with legislatures. This is a challenge worth fighting. And this is a great start today.”

Also in praise of the commitment to reduce greenhouse gas emissions, and in attendance, was Glenn Murray, Ontario’s minister of environment and climate change who said: “Using compressed natural gas for vehicle fuel has many advantages, such as being clean, affordable and readily available. I applaud Emterra Group for doing their part to support a low carbon economy in Mississauga, one of Canada’s busiest transportation hubs. This is the type of innovation to help keep Ontario strong and prosperous.”

According to Emterra, using CNG collection trucks can reduce greenhouse gas emissions by up to 20%.