CAMBRIDGE, Ont. – Ontario Premier Doug Ford focused on the trucking industry today as he continued to sound the alarm about a federally imposed carbon tax, which takes hold on April 1.

Diesel prices will increase by 5.37 cents per liter this year and 13.41 cents by 2022. Combined with HST, this will add more than $350 million to the price of the province’s heavy-duty transportation in the coming year. By 2022, the figure could be as high as $870 million.

“A carbon tax will make no difference to the environment,” Ford said, against the backdrop of a Challenger Motor Freight facility. “A carbon tax will also chase jobs out of Ontario – manufacturing jobs, small  business jobs, and trucking jobs.”

His Conservative government has already scrapped a cap and trade system in the province, trimming gasoline prices about 4.3 cents per liter in the process.

“You can be for jobs, or you can be for a carbon tax, but you can’t be for both,” Ford said. “The risk of a carbon tax recession is real. Just think about it for a second. Every single time a trucker fills up a tank, the carbon tax will take a bite out of their employer’s pockets. That’s money that could be used to hire new workers or upgrade your fleets, or it’s a cost that will be passed on to the customers through higher prices on the shelf because that’s what a carbon tax does.”

“The trucking industry is dominated by small businesses and competes on very tight margins, with operating ratios in the 0.94 range or higher. Consequently, the government of Ontario is correct in its belief the trucking industry will face challenges in absorbing rising fuel costs and going forward this issue will be a major point of discussion between carriers and their customers,” said Ontario Trucking Association president Stephen Laskowski, on hand for the announcement.

“Our industry like so many others is impacted by the federal carbon tax that will make fuel more expensive and therefore make shipping more expensive for our customers,” added Challenger Motor Freight CEO Dan Einwechter.

Rod Phillips, minister of the environment, conservation, and parks, referred to Challenger as an example of ways that fleets can reduce emissions independent of a tax. “They’ve improved fuel economy, reduced harmful emissions, and are doing their part to work toward a clean environment,” he said, citing the use of automated transmissions, auxiliary power units to combat idling, and targeted driver training.

The provincial government says it will be able to reduce provincial emissions to levels 30% below 2005 levels by 2030 without imposing a carbon tax. Current levels are said to be 22% lower than 2005.

Ontario has joined Saskatchewan, New Brunswick, and Manitoba in the fight against the Greenhouse Gas Pollution Pricing Act, saying that it’s unconstitutional.

“Climate change is real and it’s happening now. The more Conservative politicians deny the importance of taking real action on climate change, the bigger the debt they leave for our kids. If you don’t have a serious plan to fight climate change, you don’t have a plan for the economy or for Canada’s future,” she said in a prepared statement. “Conservative politicians like Andrew Scheer and Doug Ford want to take us back to the [Prime Minister Stephen] Harper days and make it free to pollute again.”

This was the second time Ford has visited Challenger Motor Freight in recent months. He was at the facility in late December for a briefing on trucking industry issues that included Transport Minister Jeff Yurek and Todd Smith, minister of economic development, job creation, and trade. 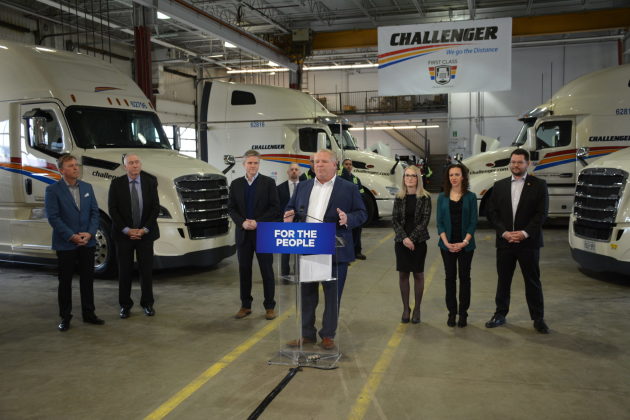