Class 8 truck orders pulled back in May, to just over 16,000 units, ending a growth streak that began in October 2016 and reaching the lowest volume in the past seven months, according to industry analysts.

FTR reported 16,300 preliminary Class 8 orders for May, a 31% drop from April, but up 29% year-over-year. All OEMs saw a decline except for one, according to FTR. It says its 2017 forecast looks solid, if orders maintain the current pace through the summer.

“The order numbers are not that worrisome, considering the steady volume of orders over the past seven months,” said Don Ake, vice-president of commercial vehicles with FTR. “It appears the typical summer order slump just showed up one month early. It does indicate the market is functioning normally and there is a steady, not robust, upward trend. The slowdown in order activity will give the OEMs a chance to get production lined up with demand.”

ACT Research reported preliminary Class 8 orders of 16,800 units, down 30% month-over-month but up 18% year-over-year.

“While the magnitude of the decline is greater than expected, the timing is spot on,” said Steve Tam, vice-president, ACT Research. “May is typically the time of the year when order intake drops below average.” 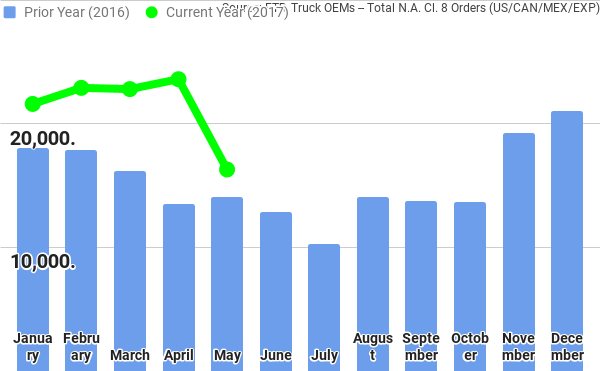