TORONTO, Ont. – The Canadian Trucking Alliance (CTA) plans to increase its level of co-operation with law enforcement officials in order to combat the problem of cargo theft.

Actually, as part of its goal to draw more attention to the topic, the organization is promoting the use of the phrase “cargo crime” instead of the more innocuous sounding “cargo theft” when dealing with politicians, police officers, the insurance industry and the general public. It is terminology adopted after the CTA commissioned a report about the topic in 2011. It was that report—and what has been done in the wake of the report—that was the focus of the CTA’s recent “2014 Cargo Crime Report Card” seminar.

Bob Goodall, president and CEO of Decurion Group Inc. (the company that created the original 2011 report, Cargo Crime in Canada) told seminar attendees that much has been accomplished. Overall, he said the industry is on the right path, and that carriers have begun taking security more seriously. He cited the CTA’s partnering with New Jersey-based CargoNet, giving CTA members access to CargoNet’s cargo theft reports so they can track what has taken place, as a positive step. He also spoke of the centralized cargo theft reporting database that was developed by Insurance Bureau of Canada (IBC).

But even with these positive steps, Goodall said there is more to do. He said the CTA needs to develop even stronger ties with high ranking law enforcement officers. He said the CTA is committed to developing relationships with the Canadian Association of Chiefs of Police (CACP) and “piggy back on the police lobby with the federal and provincial governments.”

Goodall added that the organization is also looking to adapt a program that exists in Atlantic Canada and replicating it in other parts of the province.

“IBC have a concept they have created in Atlantic Canada called Provincial Auto Theft Network, (PATNET), which involves law enforcement, their equivalent of the MTO, and even armed forces have an interest in it.”

According to Goodall, the ad-hoc group comes together to share information and host training sessions about auto theft and cargo crime. 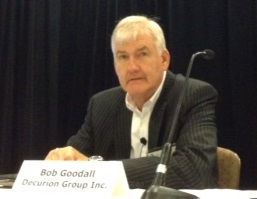 Along with plans for replicating PATNET, Goodall would like to see some other initiatives begun. First he wants to see a white paper created.
“We have the 2011 report. It is three years later. I have spoken generally about the progress that we’ve made in three years. We need to take that and put it in a white paper and get it to CACP and OACP (Ontario Association of Chiefs of Police) and the Quebec chiefs of police. And to pass it to Public Safety Canada and get it out to criminal intelligence services across the provinces and the federal intelligence services, and the RCMP. We need to get that white paper out there, because that white paper will be something we can build a profile with, if we include statistics and other activities that have taken place,” he said.

Goodall also spoke of the need for the industry to take responsibility for educating law enforcement officials about the actual nature of cargo crime in Canada.

“There are only so many days that law enforcement officers can go to police college and take on training, given their duties and responsibilities, so if we are going to ask them to engage in training so they can increase their awareness, we have to be right spot on and direct with what it is we want them to know. How do we do that? Training costs money, especially if we are looking at developing a video.

“One of the things we did do was, in consultation with the OTA, we developed a police officer’s check list that will now be distributed through the OTA and the IBC and given to police officers so they have some information, a quick reference that if they are involved with the theft of a trailer and they do have reasonable probability it may be stolen or there is something wrong with it from a criminal perspective, they’ve got some guidelines they can use. That’s in place,” he said.

But according to Goodall, that isn’t enough. He said the industry needs to do more, and it is looking into developing more training tools.
We are looking into a partnership with OPTIVA which is the Ontario Police Video Training Alliance (OPTVA). It is linked with the Ontario Police College. It’s staffed by members of the Niagara Regional Police Service. They develop police training videos and law enforcement are very comfortable with the product OPTIVA puts out. One of the commitments is we are going to engage with OPTIVA to determine whether or not we can use their services to develop a video of cargo theft investigation.”

Another of the seminar’s speakers, Kate Ryan, crime analyst with the Insurance Bureau of Canada, also issued a state-of-the industry report, but hers was created from a much more recent perspective.

The National Cargo Theft Reporting program was officially launched in March by the IBC and the CTA. The program allows carriers who have been the victims of theft to report details of the stolen cargo to the IBC for entry into a database accessible by law enforcement officials across the country. During the seminar, Ryan provided the industry with its first glimpse into what the results of analysis on the database reveal.

“There is a severe problem with cargo of automotive parts and grocery and personal hygiene,” she told the audience. “I don’t this will come to a shock to a lot of you in the room because last summer every report we got was about baby products: formula, diapers. That was the trend. That was what was happening. At least we were able to communicate that trend back to law enforcement on the street and open the communication lines there.
“Automotive, I think is pretty straight forward. Automotive is fit to move, and when it moves, it moves fast.”

She added the last two reports received by the ICB were for stolen tomatoes (fruit and vegetables tend to be popular during farmers’ market season) and Jameson Irish Whiskey (right before St. Patrick’s Day).

According to Ryan’s data, it’s not just the cargo being stolen.

“We’re seeing the whole kit and caboodle is being taken. We have it broken down to truck, trailer, cargo, and in almost all our cases, the truck, trailer and cargo where stolen.”

Ryan named Mississauga, Montreal and Brampton as the hotspots for theft to occur. Usually the thefts occur between 10:00 PM and 4:00 AM. When equipment (or cargo) is recovered, she said it is usually right off the 400 series highways.
“Even out as far as the east end of Ottawa, they are following the same pattern. It’s easy pick-up, take what they need and dump it. The may move it a little bit, but for the most part that seems to be the M.O.”