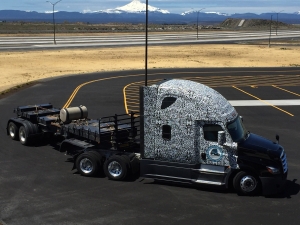 MADRAS, OR – Daimler Trucks North America has officially opened its High Desert Proving Grounds, representing a US$18.7-million investment that will put the company’s trucks through their paces – including connected, platooning and autonomous vehicles of the future.

“Every mile on the track is equivalent of 200 miles on some normal road,” explains Wilfried Achenbach, senior vice president – engineering and technology. Freightliner designs its trucks to last 1.2 million miles, so this track can replicate that level of wear in just 6,000 miles.

“The entire track has 3.5 miles and covers multiple maneuvers,” he says. “It replicates most of any road surface you can find around the world.”

Work to clear the 87 acres of land began in June 2015, while construction launched in May 2016. Now there are nine test lanes overall, as well as a 32,000-square-foot facility with 14 service bays, and several video monitors connect teams to Portland and beyond.

“The opening of this facility will ensure the future reliability of our products, as well as expedite future technologies that enhance our customers’ bottom line,” said Roger Nielsen, president and Chief Executive Officer.

It represents a new way for Daimler engineering teams to share information, too. The site is far closer to the company’s Portland headquarters than an Indiana track that Daimler had been leasing from Navistar. These proving grounds won’t be open to any other Original Equipment Manufacturers, but future tests could include selected suppliers, Nielsen says.

The 120-mile trip between Portland and Madras itself will itself be part of ongoing validation tests including portions of interstate, rural roads, and mountainous terrain through the Mount Hood pass, the company notes. For example, the route was used to validate the potential gains through truck platooning.

And many members of the Portland team will now be making regular trips over the mountains for a first-hand look at ongoing track tests, which will focus on durability, reliability and functional issues. No computer can do it better. “You can feel it, you can touch it,” says Achenbach. “It will bring our engineers closer to the project.”

A similar track is already in Germany, and another is planned for Brazil, supporting a global approach to testing.

“Bumps are bumps wherever you go,” Achenbach says.

But the bumps used for durability tests are special, created from a series of 379 panels, and 99% of the surface sits within five millimeters of design spec’s. It looks like a gently waving corduroy, but looks are deceiving.

This is worse. Picture the roughest road you’ve ever driven. Drivers who are hired for the tests need to pull over every 15 minutes, and they have to take a half hour break every two hours.

It’s all by design, based on measurements of real-world operating conditions across Canada and the U.S.

Handling and J-turn tests take place on the Vehicle Dynamics Area with a 700-foot diameter. Start and stop tests occur on a man-made incline that has been nicknamed Mount Madras. The local climate in this hot desert also offers hot summers and “reasonably” cold winters, Achenbach says.

“The focus here is on rough-road input,” says Sean McKenna, manager of durability, testing and instrumentation. “The testing we don’t want to do on the public roads, we can do here.”

The proving grounds will soon be staffed by 40 employees who will “bring trucks to life,” Nielsen adds.

Daimler is no stranger to Madras, of course. A three-lane loop road used for noise, vibration and harshness tests has been in place here since the 1980s. But the latest investment is certainly a boost for the local economy. Daimler has 2,800 employees in Portland alone, and is now one of the Top 10 employers of graduates from Oregon State University.