The company has set a goal of improving on its fuel economy by 5% every two years. It did so when moving from the Freightliner Cascadia to the Cascadia Evolution two years ago. The next step up comes in the form of a new Integrated Detroit Powertrain (IDP) that combines Daimler’s DD15 engine, its DT12 automated transmission and front and rear Detroit axles. When spec’d as a 6×2, the package will provide fuel savings of up to 7% over today’s Cascadia Evolution, Detroit officials announced today. A 6×4 package will still deliver savings of about 5%, they said. 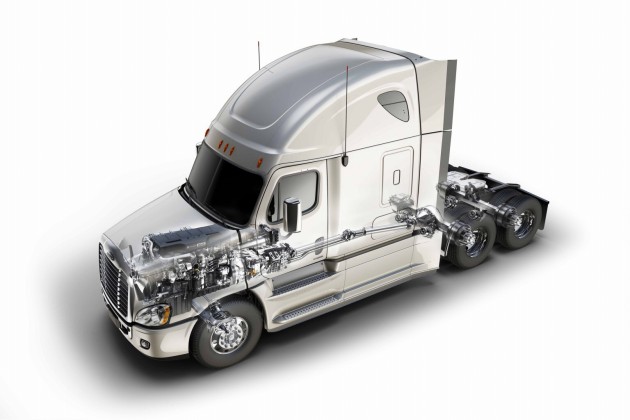 Today’s announcement, made at the Detroit Diesel engine plant, culminates a long-term goal of Daimler’s, to unleash the full potential of vertical integration.

“The Cascadia Evolution was our first real effort at integration,” said David Hames, general manager, marketing and strategy with DTNA. “It has been a tremendous success and our first demonstrable example of what vehicle integration really was.”

Detroit is now bringing downspeeding to the table. The DD15, DT12 and Detroit steer and drive axles with a 2.28 ratio (for 6x2s, 2.41 for 6x4s) allow the truck to cruise at 1,200 rpm (compared to 1,350), providing fuel savings. Further improvements come in the form of a six-blade fan (compared to nine, today) that produces less parasitic loss when cooling. It also runs quieter, officials said.

The IDP package will be aimed at on-highway applications. Officials said the company is looking to simplify the spec’ing process for customers. The goal is to provide customers with the lowest “real cost of ownership,” Hames said, which takes into account driver profiles, turnover, types of loads and how frequently a truck is running empty or full.

Brad Williamson, manager, engine and component marketing with DTNA, said the new integrated powertrain will initially be offered with a 400 hp/1,750 lb.-ft. rating. Customers will be able to achieve 8 mpg or thereabouts in typical linehaul applications. The new powertrain marks the first time DTNA has taken advantage of downspeeding.

“This is our first venture into downspeeding,” Williamson said. “We think we’ve done it better than anybody.”

“We know they’ve been coming on,” Williamson said of 6x2s. “They’re really where we’re going if you want fuel economy. You’re going to get less rolling resistance because you have one dead axle and the second thing is less weight, about 400 lbs less weight than what a standard 6×4 weighs.”

There are complications in Canada, however, where 6x2s are technically illegal. You can read more on that here. For customers who want the benefits of a 6×2, the offering will be available with Meritor Wabco’s Electronically Controlled Air Suspension (ECAS) load transfer technology, to provide traction in slippery conditions. But even when choosing a traditional 6×4, Williamson noted customers will still see a fuel economy improvement of up to 5% compared to today’s vehicles.

The new package will be available to order on the Freightliner Cascadia Evolution in January 2015 and on the soon-to-be-launched Western Star 5700 later next year. A new app will go live in June, available for Android and Apple devices. The slick app, previewed for members of the trade press, allows customers to explore the benefits of vehicle integration and each component that comprises that new integrated powertrain.