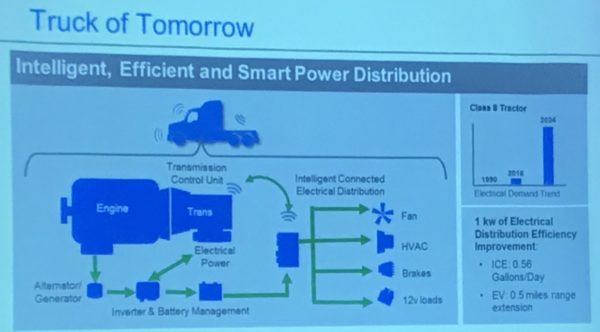 ATLANTA, Ga. – Eaton’s commercial vehicle group is leveraging broader automotive and electric expertise as it prepares for a future that is increasingly electrified and connected. A newly launched e-mobility business segment – combining elements of the company’s vehicle group and electrical business – is one of the latest signs of that.

“There’s going to be a requirement for more power electronics on board,” observed Larry Bennett, director of vehicle technology and innovation, referring to the possibility of three-voltage systems on commercial vehicles. Eaton Electrical, currently responsible for 60% of company revenues, will help to apply lessons from buildings, leading to new smart power management tools and power distribution strategies, he said.

There’s already been an increase in electric powertrains for buses and lighter vehicles, of course. And Eaton expects fully electric valvetrain actuation to be a reality within a decade. Hydraulic lash adjustments, now used in passenger cars, could soon manage intakes and exhaust in heavy vehicles as well.

Electrical power also needs to be maintained as OEMs look at ways to turn off engines and allow coasting on downhill routes, he added, referring to one emissions-reducing strategy. Eaton sees the promise of using the rear wheels to drive a generator mounted on the back side of the transmission. “You can now provide power while you’re in the engine-off coast mode,” he said.

It isn’t the only way the company believes it will play a role in lowering emissions. With allowable NOx levels expected to be reduced 90% by 2024, an electric motor-driven fixed-displacement exhaust gas recirculation pump could work independently of engine speed. Deactivating selected cylinders, and maximizing the power of others, could generate temperatures above 250 Celsius needed to treat NOx.

Working with the U.S. Department of Energy, Eaton also recently developed an alternative to large electric motors with single gear reductions. The four-speed transmission that emerged uses gearsets to reduce the size of the required motor in a Proterra bus. The new motor itself is four times lighter than its counterpart, and when coupled with the new transmission, the system still weighs half as much. It’s about more than shedding weight, too. The battery range increases 15%, while startability increases 2.5 times, and gradeablity triples.

A new engine brake introduced last year in North American and Europe, meanwhile, helps to handle the stopping challenges in an era of lower engine horsepowers, improved aerodynamics, and low-rolling-resistance tires. The model takes advantage of braking during the entire compression stroke, Bennett said. And it will roll out in China by next year.

Eaton is also looking to leverage the power of data and telematics realized through new product launches.

The IntelliConnect system, introduced last year, is already tracking 4,000 vehicles. Analyzing fault codes received through telematics, it gives the Eaton Center the chance to identify situations that might be triggered by something like a harsh maneuver.

“The whole idea is to increase uptime, and then there’s a wealth of information we can garner,” Bennett said.

Over-the-air programming is also opening opportunities to predict maintenance needs. “Doing it more in real time than we do today,” he said, referring to the potential of remote updates and calibrations.

Leveraging data from GPS and vehicle-to-infrastructure communications systems could also make a difference of its own. Knowing a light is about to turn red, a vehicle might limit a driver’s acceleration. In contrast, a truck might accelerate into a hill before a driver would even think about it.

It’s not the only way Eaton is leveraging expertise through partnerships. The Eaton-Cummins Automated Transmission Technologies joint venture was formed just seven months ago, already releasing the Endurant automated transmission that was launched at the North American Commercial Vehicle Show. There are now more than 3,500 of these on the road today.

This year the joint venture is expected to unveil new applications for the Procision dual clutch transmission, supporting medium-duty and recreational vehicles.

“We’ve done a lot in seven months,” says Scott Davis, general manager of that joint venture, referring to the Endurant as a “phenomenal product and launch”. The company has also “doubled down” on investments in new technologies as it focuses on the next generation of transmission products.

“You’re going to see a whole pipeline of products being introduced by the Eaton-Cummins joint venture,” Davis said, referring to work on advanced shifting, further integration, and neutral coasting capabilities. “It’s all about powertrain integration.” The end results will lead to faster, smoother, and more-efficient shifts.

“We’ve done some novel things with our Endurant transmission,” he said as an example, referring to air-actuated shifts. And Eaton is already working with SAE to develop the messaging that would apply if air supplies are lost, helping to lessen the impact on the vehicle.

In general, the company’s transmission portfolio — which already includes the Endurant transmission, Fuller Advantage, UltraShift Plus for heavy hauls and performance, and the Procision for pickup and delivery applications – is expected to grow. “Look for expansion in that portfolio and us venturing into other applications,” he said.

More automation is certainly on the horizon. While such transmissions are now spec’d in 70-80% of linehaul vehicles, the adoption in heavier applications has been slower, at around 30%. Automation will become increasingly important as an aging driver pool in that industry segment is replaced. But there’s also a need for more-reliable products and purpose-built automated manual transmissions for such work, Davis said.

Automated manual transmissions will play a role in helping meet greenhouse gas emissions standards in 2021, ’24, and ’27, too. “You’re going to see better results, better support of those emissions compliance, with an AMT,” Davis said.