COLUMBUS, IN — If you’re one of those who’s been thinking that Cummins is a dead duck, and that’s been the tone of more than a few conversations I’ve joined over recent years, think again. Nothing could be further from the truth.

First off, the company presently maintains an 80% market share in the North American medium-duty market, more than 90% of the school and transit bus markets, and still a decent lead on the class-8 side of things with something like a 40% share through June of this year.

Dead in the water? Not exactly.

Globally, the company is very strong. In 2015 it manufactured more than a million engines in the heavy-duty, mid-range, and light-duty markets — from 50 to 650 hp — and nearly half of them were from its joint-venture partner plants around the world.

And they’re killing it in China with their 12-liter engine introduced a couple of years ago. It had a slightly rocky start there but quick remedial action saved the day and now they almost can’t build them fast enough. It will see service in India and elsewhere in the world too. We’ll have a North Americanized version of that engine — to be called the X12 here — launched in March of next year.

There’s also an all new 15-liter engine coming from Cummins in 2022.

TRUE ENOUGH, VERTICAL INTEGRATION has become a key strategy for most truck makers, and that presents a mighty big challenge for the sole remaining independent engine maker. But Cummins is weathering that storm pretty well so far and has plans to protect its future by diversifying its product offerings beyond internal combustion engines.

Last week, to prove the point, the company introduced an all-electric class-7 tractor. More on that rather historic announcement later.

“Energy diversity is the key to the future, and a one-size-fits-all approach is no longer viable,” said Jennifer Rumsey, Cummins vice president and chief technical officer, during a press conference last week in Columbus, IN. “We believe there is a place for a wide range of technologies from diesel and natural gas to electric.

“These technologies will evolve in the coming years,” she continued, “and Cummins is capable and ready for this range of power technologies to meet our customers’ needs today and in the future.”

Fact is, Cummins has been working on the electric idea for two decades, and the climate is now right to take a firm step in that direction.

The company has a history of meeting and capitalizing on disruptions, declared Srikanth Padmanabhan, president of the engine business, the largest of Cummins’ four business segments.

“We will be the powertrain supplier of choice,” he said. “No matter what the technology is, we’ll be there for our customers.”

That said, he’s confident that diesel engines will be powering heavy trucks for many years to come, especially in the long-haul sector.

“Twenty years from now, we will still be using internal combustion (IC) engines running on conventional or unconventional fuels,” he said, noting that they may not be the engines that we’re familiar with today. “By that time, all IC engines will have some form of mild hybridization and/or accessory drives, but IC will continue to be an important player in global transportation.”

IN A DRAMATIC DEMONSTRATION of its technological agility, Cummins finished off its press conference in Columbus by unveiling its all-electric, zero-emissions class-7 tractor. Obviously it’s a first for the 98-year-old diesel manufacturer that wants to become known as a powertrain provider, not an engine builder. It was a surprise to many, even to those of us who knew electric power was in the cards at Cummins, as well as being a small slap in the face to Tesla, which has been threatening to introduce an electric tractor next month.

Called the ‘AEOS’ electric commercial vehicle demonstrator, and built by Roush on what seems to be an International ProStar base, it’s a working 4×2 regional hauler, not just a concept shell. Cummins sees its role in vocational applications like urban delivery, port drayage, and terminal container handling. 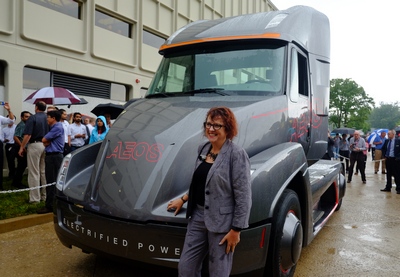 It’s claimed to achieve over 30 miles per gallon in diesel-equivalent terms while accelerating 25-35% faster than the same tractor powered by an 11 or 12-liter diesel (depending on rear-axle ratios, of course).

The tractor’s range is 100 miles on a single charge of its 140-kilowatt-hour li-ion battery, but that can be extended to 300 miles with the addition of a second battery pack installed in the otherwise empty space under the hood. Charge time for the single-battery iteration of the truck is just one hour, assuming access to a 140 kWh charging station. By 2020 that’s expected to be just 20 minutes, Cummins says.

IT OFFERS NO SHORTAGE OF POWER, producing 470 hp peak and 302 hp continuous, plus a whopping 2500 lb ft of torque at its peak and 1365 lb ft continuous. It’s a direct-drive/drive-by-wire system with continuous acceleration and no gear shifting required.

Another version of the tractor is also feasible, namely a ‘Range Extended Electric Vehicle’ with a Cummins B6.7 diesel engine acting as a generator system to keep the battery powered up. In that case Cummins would be offering an ‘Ultra-Low Emissions Vehicle’ with a 600-mile range. This configuration has been called a ‘series hybrid’ in the past.

“We’ll have an electrified powertrain in customer hands by 1919,” said Padmanabhan, with a range-extended truck on the road by 2020.

FOUR MARKET DRIVERS WILL DICTATE how quickly electric-powered vehicles penetrate the broad transportation industry, she said: the total cost of ownership calculation, the prevalence of a charging infrastructure, how quickly the technology itself advances, and regulations.

For now, electric power will be attractive mainly to ‘return to base’ operations where vehicles return to a home base at the end of the day to charge overnight. 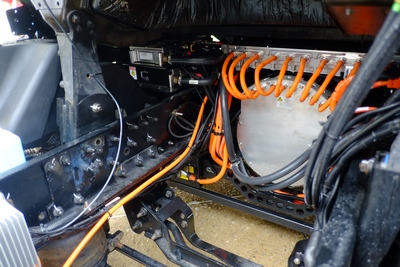 “Electrification makes sense in some areas, but not all,” Padmanabhan said. “We know from real data and real-life experience where it works, where it makes sense and why we should use it.”

The company is also developing a high-efficiency spark-ignited engine that it says can deliver diesel-like performance and durability across a range of liquid fuels — including ethanol, methanol, and gasoline — while meeting the most stringent emissions requirements.

Cummins chemists and engineers scientists are also investigating the viability of alternatives like bio-fuels, synthetic fuels, and hydrogen. And, with unnamed partners, Cummins is looking at projects focused on proton-exchange membrane and solid-oxide fuel cell technologies.

“Cummins is partnering with a few different fuel cell providers to develop that technology,” said Rumsey. “We have been working for a number of years on those technologies.”

Padmanabhan says fuel-cell vehicles will come eventually but, like everyone else, wouldn’t predict when that might happen. How long have we been waiting?

And, of course, Cummins is still strong on the natural gas option, showing off the latest in near-zero-emission NG engine technology last week. It remains a viable alternative to diesel, the company says, not unlike the electric answer if the emissions are as low as they say. Its ‘Near Zero’ natural gas engine offers performance equivalent to diesels and Cummins says it’s managed a 90% reduction in NOx, getting output down to just 0.02 gm/hp/hr.

Like an electric truck, this is still best suited to shorter ranges and a return-to-base operation. Range is limited by the size of the fuel tanks, but it can be used to power range-extended battery electric vehicles.

THE X12 AND THE X15, available next year and in 2022 respectively, will be interesting new players on the Cummins team.

We know little about the next-generation 15-liter engine, of course, though we did see it during a tour of the Cummins Technical Center last week (no photos, please). The company says the X15 will meet 2027 GHG rules five years ahead of the current mandate, and without using a complicated waste-heat-recovery system. It’s promised to be 300 lb lighter than the current 15 and much shorter, about as tall as a 13-liter engine, allowing for efficient packaging in future ultra-aero trucks.

I’ll guess that it will feature some design concepts introduced on the ISG, soon to be the 11.8-liter X12 in North America. It was introduced in 2014 as a global engine platform, first appearing in a 50/50 joint venture with the world’s largest independent engine maker, Beiqi Foton Motor Co. of China. Foton uses the ISG diesel in a new truck series developed with Daimler, the Foton Daimler Auman GTL ‘Super Power’ truck, itself a 50-50 joint venture between the Chinese and German companies. It already has more than a billion miles under its belt. There’s also a 10.5-liter version, though it seems we won’t see that here. 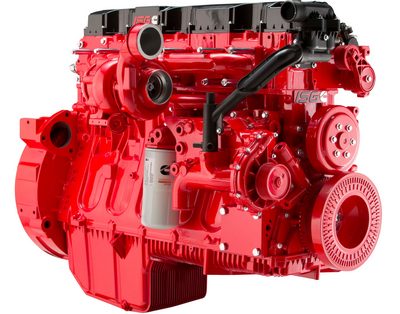 Design and development of the engine was led by a small Cummins team in the United States, supported by global technical and marketing resources with knowledge of local market and customer needs. This global design approach used the latest advanced technologies to develop an adaptive architecture, said Cummins in launching the ISG, with each engine designed to meet unique performance and cost-of-ownership expectations for its target market and region.

The ISG design sought to minimize engineering demands for vehicle and equipment manufacturers with a common, compact installation envelope. A key design focus was to achieve significant weight savings in order to increase the power-to-weight ratio. A sculptured block retains high rigidity while removing unnecessary mass. The use of composite material for the oil pan and valve cover provides further weight savings. With this innovative approach, the ISG achieves a remarkably low engine weight of 1900 lb while retaining structural strength and durability, said Cummins.

As of last July we learned that the X12 is rated up to 475 hp and as much as 1700 lb ft of torque, the peak coming at a low 1000 rpm and staying there to over 1400 rpm. We also know that it’s 600 lb lighter than the closest 13-liter engine and 150 lb lighter than the nearest 11-liter motor. It will thus boast the highest power-to-weight ratio in the industry, says Cummins. It’s targeted at vocational, regional and weight-sensitive bulk-haul applications and will be built in the company’s plant in Jamestown, NY.

Clearly, Cummins is not sitting on its heels waiting for things to happen.