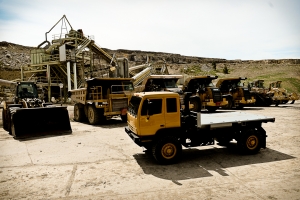 BOZEMAN, MT – Extreme-duty users who came to love Canadian-made Bronto trucks — a refurbished version of the U.S. Army Family of Medium Tactical Vehicles (FMTVs) — will have a chance to buy such vehicles yet again.

Acela Truck Company will officially unveil the new Monterra 4×4 and 6×6 trucks during the upcoming Global Petroleum Show in Calgary, and it has partnered with people who were behind BAE Systems. The latter company introduced Bronto trucks to mining operations about seven years ago, but folded when it lost the contract to source the vehicles.

The trucks are being sold for punishing applications including oil and gas, mining, pipeline construction and forestry. Original versions are still being used as service vehicles.

The FMTVs were originally designed for combat conditions, and for 17 years have earned the army’s “ultra-reliable” status.

Acela’s Monterra has a 22-inch ground clearance, Central Tire Inflation System, 46-inch tires and a 54-inch turning radius. Each has been torn down and rebuilt with more than 600 new parts, with inspections including more than 300 points, the company says.

“When looking at mining, oil and gas and utilities operations, a more durable, capable and extreme truck has been in high demand for years,” says David Ronsen, president and Chief Executive Officer. “We’re here to fill that niche need and help our customers improve productivity while cutting their capital costs with the most capable truck chassis they’ve ever had.”

The trucks have an on- or off-highway capability and come with a one-year warranty.