Global energy demand is expected to more than double by 2050 as the overall population grows to 9 billion people, he observed during a briefing at Texas A&M’s Transportation Institute. Transportation alone is expected to require 70% more energy during the same timeframe. “It’s the big trucks that tend to over index in terms of CO2 emissions,” he adds, noting that they equal 40% of road transportation emissions overall.

“All of these things we see now as a challenge will only become more pronounced in the future.”

But there’s no single solution. That has Shell exploring a wide portfolio of fuel sources, and even the role it will play in emerging electric trucks that run on batteries or fuel cells.

Rather than waiting for a “perfect future”, many gains can be realized through relatively small changes, Guerrero stressed. If every on-highway truck in the U.S. improved fuel economy by just 1%, the industry would save 8.23 billion pounds of CO2 in a year. Burning a US gallon of diesel, after all, equates to 22.38 pounds of CO2.

Still, some emissions-related gains will involve radical thinking – pushing the trucking industry in the direction of fuels like natural gas, as well as battery-electric vehicles and fuel cells.

Regulators will have a role in the journey as well, said David Tsui, Kline and Company’s project manager – energy.

He points to governments around the world that are demanding lower CO2 emissions. In addition to the rules in place in Canada and the U.S., Europe is about to shift to its next generation of Euro 6 targets, while China is preparing for China 6. Germany itself wants 1 million electric vehicles on the road by next year, and China has plans of its own to promote “new-energy” vehicles, he said.

While cleaner-running options include everything from natural gas to synthetic fuels and hydrogen, battery-electric vehicles appear to have an undeniable edge.

Canada could see one of the most rapid shifts in this direction. Kline research believes one in four Canadian commercial vehicles – particularly those on the lighter sided of the spectrum – will run on electric power by 2040.

“Once the infrastructure comes in, you’ll start to see it growing,” Tsui says, referencing ranges that will extend over the next couple of decades.

Fuel cells look promising, but the hydrogen-based equipment is not widely championed by governments, Tsui said. Battery-electric vehicles can also tap into an existing electric grid. Hydrogen-electric systems have to start from scratch.

“It may or may not catch on,” he said. “It may actually fizzle.”

Hydrogen offers quicker refueling times and can store energy for longer trips, said Mike Roeth of the North American Council for Freight Efficiency. But he also recognized the inefficiency of using electricity to create hydrogen, which is stored as a fuel and loaded on a truck to create, well, electricity.

His organization reports that medium-duty trucks will be the first to electrify, and he also believes that vehicle range may not be the problem that some people think.

While company startups tend to oversee what their technologies can do, established OEMs might under promise and over deliver on their electric plans. NFI was equipped with an eCascadia that had a reported range of about 240 km, he says as an example. The fleet pushed it on two return trips to a port, covering 354 km on a charge. Plenty of warnings were flashing on the dash, but it made it back.

“That’s one data point,” Roeth said, “but it makes you wonder.” 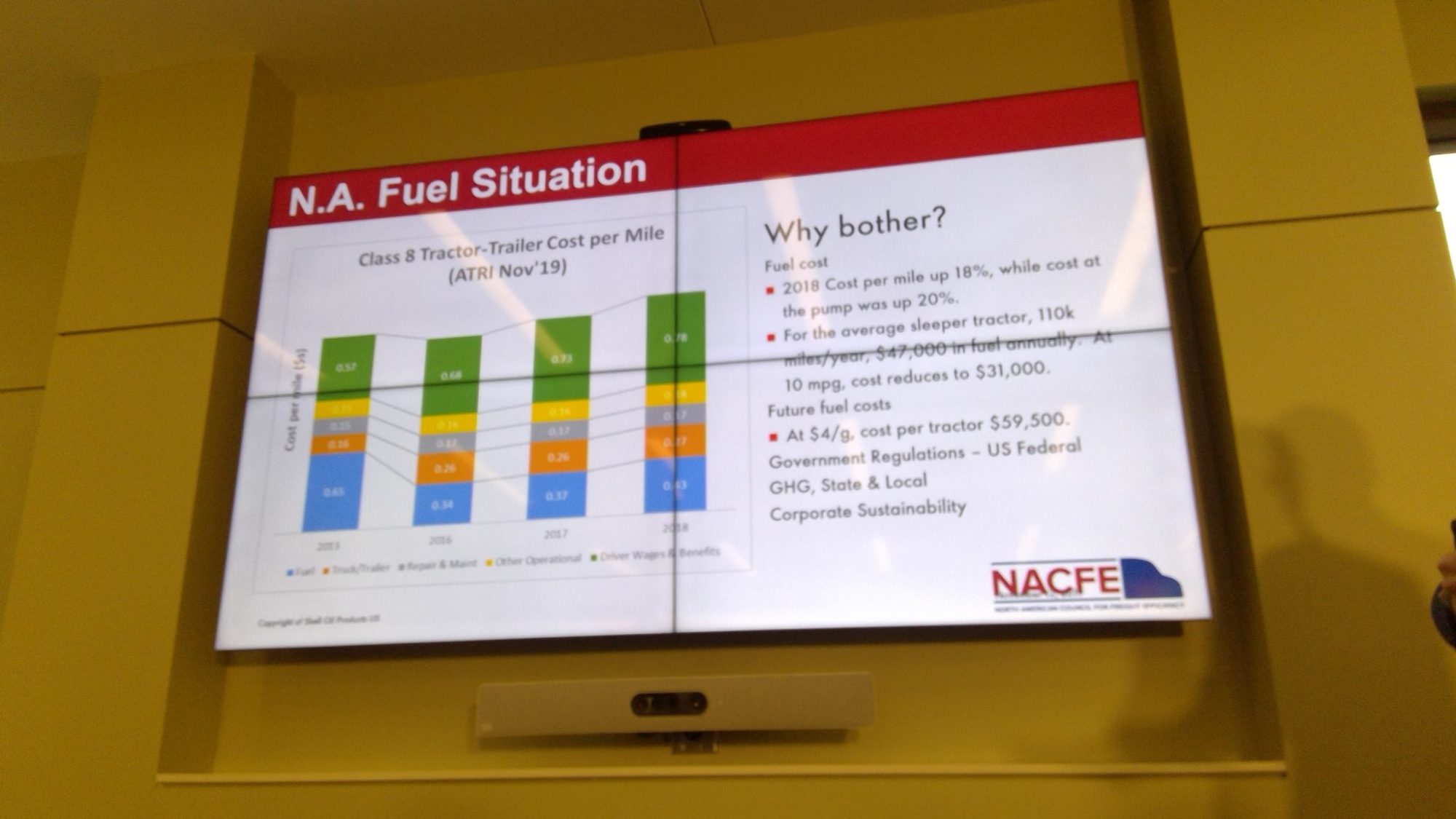 Fuel economy and the CO2 fight

The fight against CO2 emissions will include internal combustion engines as well, as the designs enhance fuel economy.

“Diesel’s not done,” Roeth said of the efficiencies to come. “It’s a little further along in its life.”

Fuel costs have been quietly rising over the last five years, too. They’re still lower than 2013, when it cost more to fuel the truck than pay the driver, but there’s no denying the price at the pump. Still, fleet gains have been slow. Roeth points to the fact that 2018 fuel costs were up 20% over last year, but the average cost per mile was up 18%. “That would say the efficiency of the trucks year over year didn’t really get any better.”

“Why not save fuel if you can?” he asked.

Higher level of vehicle automation could also help improve productivity of the trucks that travel the road, making its own difference in reducing global GHG emissions, but Rutter recognizes that shift may be more challenging than some people realize.

“It turns out that humans are incredibly smart, and it’s really hard to automate what a human does in a vehicle,” he said, referring to the way motorists can drive through an urban area at about 30 km/h while simultaneously tracking a variety of threats. Early proponents of autonomous vehicles may have overestimated how much artificial intelligence could do.

“Urban environments are probably the last space this is going to be adopted, if at all,” he added. Look no further than the potential interactions between pedestrians and small autonomous vehicles on sidewalks.

“There’s an awful lot of city folks that are trying to figure out how this complicates their lives.”

Still, companies like Embark, TuSimple, Starsky, and Kodiak are demonstrating the promise of driverless applications on open highways. And at a truly local level, fifty autonomous and mobile coolers are delivering food around the University of Houston campus.

He actually believes trucks will adopt autonomous technologies before cars. There are admittedly fewer trucks than cars to deal with, and fleets face economic pressures such as a current or pending driver shortage or hours of service constraints.

Adoption rates have slowed since high-profile crashes such as one involving an autonomous Uber vehicle in 2018. “We live in an environment in which it will be a lot tougher to test this kind of innovation,” he said. But the researcher believes that careful testing at the front end will make a difference.

The race for any GHG-saving technologies — whether in the form of productivity changes through automation, battery-electric vehicles, hydrogen or something else — is not going to be limited to the largest fleets, either.

Five years ago, publicly facing brands like UPS and Pepsi accounted for most of the fleets talking about corporate responsibility, Roeth noted. “We now see that literally across all fleets.”

“Will they pay more money or not? I don’t know. It might be more of a tie breaker.”