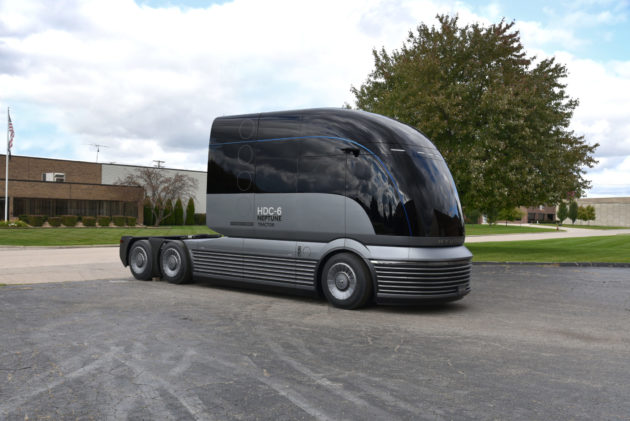 ATLANTA, Ga. – One of the biggest head-turners at the North American Commercial Vehicle Show was a hydrogen fuel cell-powered electric truck from Hyundai.

Hyundai builds Classes 2-8 commercial vehicles in global markets outside the U.S., with a capacity of 300,000 units. So, it’s a significant player globally, despite the fact it doesn’t offer these trucks in North America.

“Our vision for future mobility is to transform from an OEM, to a smart mobility solutions provider for passenger and commercial vehicles,” Edward Lee, head of Hyundai’s commercial vehicle division, said at the North American Commercial Vehicle Show. “Our ultimate goal is to manufacture vehicles that do not require any fossil fuels and emit zero carbon.”

Hydrogen’s only by-product, when combined with oxygen in the process of producing electricity, is water. Hyundai already has built hydrogen fuel cell-powered passenger vehicles, as far back as in 2013 with the Tucson fuel cell electric vehicle (FCEV). Commercial vehicles are a part of the company’s FCEV Vision 2030 strategy.

The HDC-6 Neptune is a concept truck that demonstrated Hyundai’s confidence in hydrogen as a future fuel.

Maik Ziegler, head of Hyundai’s commercial vehicle research and development strategy group, said Hyundai is the first OEM to enter serial production of fuel cell trucks, which will be shipped to customers next year.

“Nobody in the industry has longer experience in fuel cell technology than Hyundai,” he said.

They key advantages over battery electric trucks are quicker refueling times (just 15 minutes) and greater range (about 250 miles from a 4×2 rigid truck operating in Europe). Payload is similar to a diesel.

When it does launch a hydrogen commercial vehicle in the U.S., Ziegler said it will be offered on a pay-per-use model, so customers won’t have to worry about operating cost or resale value.

Hak Soo Ha, vice-president, commercial vehicle design group, said Hyundai plans to produce 500,000 fuel cell trucks a year by 2030. Some of the highlights of the HDC-6 Neptune include a low, flat floor for easy ingress and egress, and lots of interior space. It features a monocoque cab and low cowl for excellent visibility.

The plan is to fully integrate the truck with the trailer, Ha said. The trailers will be equipped with auxiliary electric motors and batteries to extend travel range and assist with steering and uphill climbing.

“There is tremendous potential and synergy to be realized by truck and trailer integration in a holistic environment under the same company’s research and development,” he said.

Other features include retractable steps, sliding doors, and rotating seats. There is no engine noise or vibrations.

“We call this space the personal studio,” said Ha. “Our personal studio concept redefines the trucking experience. It provides a personalized environment where drivers can manage their work-life balance in the most effective and rewarding manner.”

It’s an art deco-inspired design, which is also aerodynamic thanks to the extended bullet nose front end.

“Neptune marks the beginning of a completely new era, not just for Hyundai, but for the entire transport industry,” Ha said. 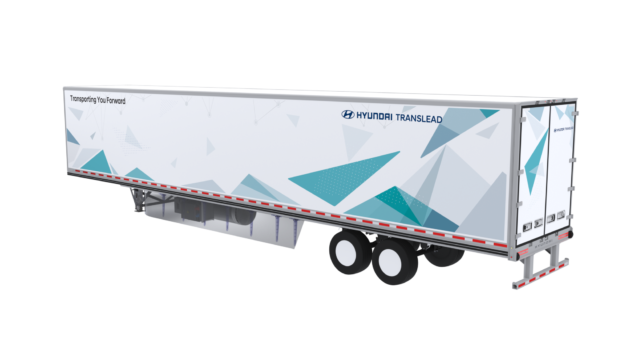 Hyundai has been equally busy on the trailer end of the business. Bongjaie Lee, CEO of Hyundai Translead, revealed a new eco-friendly refrigerated trailer design. It partnered with Air Liquide to design the trailer, which uses nitrogen refrigeration technology, reducing the trailer’s carbon footprint by 90% and producing zero emissions at the point of contact with air.

“The concept is entirely new to this market,” he said. “It’s not cooled by traditional diesel electric technology, but by cryogenic cooling using nitrogen gas.”

A traditional trailer refrigeration unit removes heat from the air, and passes it over heat exchangers containing refrigerant. The HT Nitro ThermoTech uses cold liquid nitrogen, stored on the trailer in a vessel mounted under the belly. From there, it’s piped up to the trailer body. When the nitrogen loses its coldness, it transfers from a liquid to a gas state and is vented back into the atmosphere. James said it can hold the interior temperature to plus or minus half a degree.

“It will not only pull down the inside of the trailer quicker than a traditional reefer unit, but it will recover even quicker after a door opening event,” he said.

He also said it’s environmentally-friendly, noting 78% of the Earth’s atmosphere is nitrogen. Nitrogen doesn’t support combustion and in the event of a crash, would almost instantly vaporize back into the atmosphere, James said.

Hyundai Translead is targeting an acquisition price that will rival that of traditional reefers, with considerably lower operating costs. There are nearly no moving parts and the only maintenance is a visual inspection once a year or every 2,000 operating hours. There are no consumables to be replace, no lubrication, and no filters. But James acknowledged a fueling infrastructure will have to be developed, something Air Liquide can play a role in, since it already distributes nitrogen.