KELOWNA, BC – Canada’s economy appears to face a “tsunami” of risks and concerns, but Ken Peacock continues to project a growing economy for British Columbia — and ongoing growth for the trucking industry that serves it. 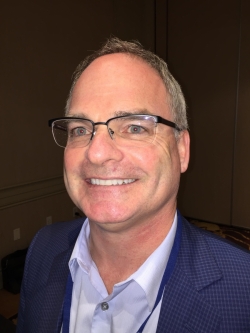 “I only see good news for the trucking sector,” said the vice president and chief economist of the Business Council of British Columbia, during the annual meeting of the BC Trucking Association. He’s bullish on the potential growth because of factors such as exports to both the U.S. and other provinces, increasing construction, strong consumer spending, and rising activity in the Pacific Gateway. A strengthening global economy is pushing up commodity prices, and commodities like softwood lumber account for 80% of the province’s exports.

The good news has not been limited to the past year. From 2011-16, truck transportation in British Columbia increased an average of 5.1% annually, and that has outpaced growth in the province’s Gross Domestic Product every year along the way.

“Your sector grew at twice the rate of the overall economy,” he stressed, referring to growth last year that reached 7.1%.

Part of the gains can be tied to the U.S. economy in general, despite that country’s mere 1.6% growth in 2016. Looking at a broader picture, the U.S. has seen 82 consecutive months of employment gains, and real wages are picking up. Consumer spending is trending higher even though there have been some bumps along the way, Peacock says. Housing starts have been climbing, and should reach 1.2 million this year, which bodes well for softwood lumber exports. “It’s steadily driving higher,” he says of housing starts, referring to 30-somethings moving out of their parents’ basements.

While the North American Free Trade Agreement is being renegotiated, Peacock is confident that U.S. President Donald Trump will focus most of the related attention on Mexico, which has used a low-wage environment to attract jobs. Many states that rely on Canada, meanwhile, will also be lobbying to protect their trade agreements, he said.

“We don’t want to get caught up in any bad policy when NAFTA is renegotiated. We’ve got to keep those borders open,” Peacock said.

“The free trade agreement has served Canada well,” he added. But like the U.S., Canada has faced its own loss of manufacturing jobs. That’s not linked to free trade, he stressed. “There’s just fewer jobs because of automation, because of productivity improvements, because of some outsourcing.”

Canada has another bargaining chip in its favor – in the form of 3.1 billion barrels of oil that are sent to the U.S. per day. “Without that oil, the U.S. is in trouble,” he says. There are healthy exports of natural gas, too, “despite the fact they are awash in natural gas.”

Still, softwood lumber is one of the targets in trade negotiations, and lumber is leading the way among British Columbia’s exports, representing about $7 billion in 2016. But the industry still enjoys the value of a low Canadian dollar, and lumber prices in general have been creeping up over the last six months, Peacock says. He thinks the bigger challenge to the sector comes from the pine beetle that has been killing off sources of potential timber.

As important as trade with the U.S. is, much of the province’s exports flow across the border with Alberta, which is entering its own period of economic recovery. More than $15 billion in goods and services were traded between the two provinces last year, even outpacing the trade with Ontario, which has a larger population.

Still, some slowdown in the province’s economy is expected. “We have to expect some slowdown after three years of very, very strong growth,” he said.

He has other concerns as well. The province already has the highest carbon tax in North America, and he would rather see British Columbia wait for the rest of Canada to catch up before considering any related increase.

There are demographic issues to face, too, particularly when it comes to an aging population. “B.C. faces more challenges in this area than the other western provinces,” he said.

In a broader context, Peacock expects the global economy to grow incrementally in the coming year, despite headwinds such as ongoing political risks, particularly as they relate to the unpredictability of President Trump.

That will all play a role in how good the news might be.