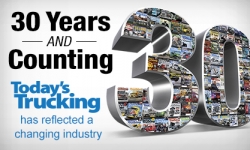 Before we published the first issue of this magazine, we argued hard about the wisdom of buying a fax machine. That’s how long ago 30 years actually is. Now, in 2017, only doctors and real estate agents seem to use faxes, but in 1987 it was a technology in its infancy, soon to be ubiquitous and then mostly gone.

But there we were, five guys trying to launch this enterprise from scratch, and the expense of a fax machine was an issue. I mention that $1,200 (yes, that much) tool because it was emblematic of the birth and subsequent growth in technologies that would change all our lives – and would soon dominate trucking.

The fax moment was by no means the biggest challenge we faced. That designation could be applied to any of several early battles but one seemed to override all others: we were neophytes as businessmen.

All of us – our leader Jim Glionna, plus partners Tony Hohenadel, Wilson Smith, Phil Knox, and myself – had already proven ourselves adept at various aspects of the magazine-making game. We were joined by Russ Davies, not a partner but a key in those first years as a sales co-ordinator. Jim’s wife Pat Glionna managed the circulation side of things.

Collectively we started with 90 years experience in the truck publishing trenches, but we had to learn how to run a business.

Called New Communications Group at the outset, the company changed its name several years ago to Newcom Business Media. Alongside Today’s Trucking we also launched Truck & Trailer magazine, a non-editorial tabloid for truck and trailer dealer advertisers. First published in May of 1987, it’s still thriving.

The inaugural issue of Today’s Trucking arrived in August 1987, all copies mailed to a list of truck owners – owner-operators and fleets alike – developed at significant expense. Within three years the magazine was established as the industry leader in advertising sales terms. We were alive and doing well.

Not incidentally, Jim’s son Joe Glionna now runs the company, and very ably. It’s a far cry from what it was 30 years back, with 22 magazines and/or directories, not just two. Plus trade shows and conferences.

But what a start. The more-or-less simultaneous deregulation of trucking beginning in 1988, the launch of the original Free Trade Agreement in 1989, and the recession that began in 1990 all conspired to render every assumption about trucking worthless. Virtually overnight, countless new, innovative and energetic players entered the freight-hauling game, while old, established carriers began to wither. Only the machinery of trucking stayed the same.

As I wrote in my column this month (Lockwood, page 13), the birth of this magazine really mirrors the birth of the modern Canadian trucking industry. We entered the fray just as deregulation began to take hold, and that changed everything.

The disappearance of entry controls was in the air long before the federal Motor Vehicle Transport Act was passed in 1987 because the U.S. had already bitten this giant bullet in 1980 with its own Motor Vehicle Carrier Act. That allowed quite a few Canadian outfits to gain 48-state authority south of the border, when many didn’t have a hope of winning a licence through a provincial transport board up here.

Impatience with that antiquated system, essentially run by old boys’ clubs that kept out new entrants with ease, led to the rise of so-called “leasing companies” – also known as “gypsy”carriers – running outside the law but welcomed by a growing number of shippers. Fed up with frequently lousy service and freight rates that they couldn’t influence, many shippers looked to the free–enterprise spirit – plus lower costs and better responsiveness – presented by opportunistic owner-operators and small fleets who did without operating authorities.

Many old-guard carriers prospered in the new age while dozens of others couldn’t handle the strain and just never did manage the competition very well. We were still weeding out weak ones years later in what seemed like a never-ending purge.

Back when we launched, 30-year-old family companies were just starting to be run by the sons and daughters of the founders, adding the handover challenge to all the others these new owners and managers faced. Quite a few of them stumbled, though some helped forge a new style of trucking.

One of those new players, profiled in that first issue of ours, was at the time a smallish former ‘leasing’ outfit with about 125 power units. And then it grew. As of last March it was in 11th place in the Today’s Trucking Top 100 for-hire carriers list with more than 10 times as many tractors, and it’s been ranked there or higher for many years. Its history is really the essence of post-deregulation Canadian trucking.

Challenger Motor Freight is that fleet, an upstart in 1987 but a powerhouse for many years now. It’s still run by Dan Einwechter, who launched the company with one truck in 1974 as DS Leasing, ably assisted by vice-chairman Gene Moser who joined the company in 1990. It was and remains based in Cambridge, Ontario, but in 2005 the company built a large and very modern new headquarters building.

Challenger has been named one of Canada’s 50 Best Managed Companies several times. Einwechter has also proven himself an industry leader, having served as chairman of both the Canadian Trucking Alliance and the Ontario Trucking Association.

This massive success doesn’t surprise me, and in fact when I was looking across the country for an up-and-coming fleet to write about in our first issue, Challenger became the obvious choice.

Just as I was prescient in choosing to profile Challenger in 1987, Einwechter’s comments in the story showed a good understanding of what was to come.

“The industry’s changing,” he said at the time. “Now we’re in a totally different environment. Safety is predominant. There are systems and procedures and controls on fuel mileage. We have EDI [Electronic Data Interchange] coming on board because major shippers want it… The ‘ma and pa’ approach – and we had it when we started 10 years ago – can’t cut it any more. Not unless you’re in Timbuktu and the only carrier in town.”

The truth is that Einwechter is in some senses responsible for hastening the onset of deregulation, at least in Ontario, largely because he had the support of his customers.

In 1985, two years before the introduction of legislation to deregulate trucking, he won an amazingly broad operating authority – the right to haul goods to and from the province of Ontario. In an era when existing for-hire carriers used provincial transport boards to keep new entrants out, usually with ease, that wide-open Challenger licence rocked the establishment. And subsequent applicants had a much easier time because a precedent had been set.

How did Einwechter pull that off?

“That was sheer determination and a lot of hard work,” he told me in the course of preparing this article. “That was eight months of my life devoted to being in my lawyer’s office more days than not, more weekends than not.

“We had 31 witnesses. I had to cajole my customers into supporting us, had to draft a ton of legal arguments. So it was tough.

“And it cost me hundreds of thousands of dollars,” he says.

Deregulation wasn’t the only big news of the day. In that inaugural issue I also covered western grain hauling – the truck vs. rail fight – and the future of the owner–operator. The former battle was ultimately won by our side but the latter remains a question mark at best, with owner-op numbers shrinking in recent years.

Free trade was, of course, a huge topic back then, covered in that first issue. The coming demographic challenge was also in the news, with a driver shortage looming. I wrote about a speech by American Trucking Associations vice president Lana Batts in which she said the trucking industry would have to change its image and working conditions if it wanted to attract younger drivers. That one certainly hasn’t gone away, and she could probably deliver a similar speech today without seeming outdated.

She also predicted, incidentally, a decrease in LTL volumes and a massive increase in both truckload and -intermodal freight. Rate-cutting, she added, would continue to be an issue. Got those right, too.

Truth is, most of those topics remain on our -agenda. Free trade certainly, but also demographic realities. The industry is radically different now, but surprisingly similar as well. That’s true of the machinery of trucking, too, at least on the surface. Underneath? Not so much.

Whole books could be written on the technology of trucking in the last 30 years. Signalled by our fax machine moment, the digital future was just being born. Electronic engine controls were suddenly on the scene – mistrusted by all and sundry at the time – and it wasn’t going to stop there.

That 1987 issue also contained an article wondering aloud if we were on the verge of producing million-mile engines. Turns out we were.

I sought perspective on all this from Itamar Levine, long-time director of fleet assets at Bison Transport and nowadays vice president and general manager at Freightliner Manitoba. Here’s what he had to say:

“I believe that the industry has done a very good job with technological advances, -compared to 30 years ago, in providing drivers with a much improved level of comfort, visibility, ride quality, handling, etc. And we’ve also certainly made great progress in enhancing driver safety by means of technology such as ABS.

“I also believe that some of the key maintenance-reducing features – lighting, wheel ends, tire inflation systems, drivelines, brake components, etc. – have made a significant difference in the life of a fleet owner.

“One last thought: a dry-van trailer today is light-years ahead of a similar trailer 30 years ago. Today’s composite vans are much lighter, stronger, offer far more interior space, and require a fraction of the maintenance that a trailer needed 30 years ago.”

Obviously we’re way ahead of where we were when this magazine was launched, both on the hardware front and elsewhere, but many issues – especially insufficient or even crumbling infrastructure – remain. We still don’t really know how to deal with drivers and the shortage of qualified and willing applicants. Same with technicians in the shop.

Safety compliance, just starting to enter the frame 30 years ago, is now a huge factor in trucking life. And not necessarily a good one.

Free trade has been thrown into the mix again, just to confuse things.

What hasn’t changed, I’d say, and Einwechter agrees, is the terrific people of trucking. They were less stressed in 1987, that’s for sure, but they remain an engaging bunch of folks. Sadly they don’t have time for three-hour lunches any more.

This magazine hasn’t changed, either. And it won’t. Our -commitment to serving readers is exactly the same now as it was 30 years ago. Yours truly won’t guide Today’s Trucking through the next three decades, but that -commitment will remain. That’s a promise.