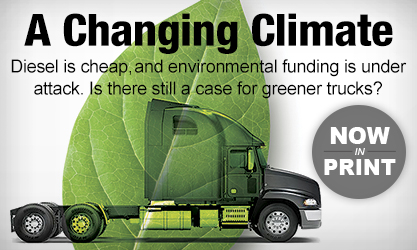 Black smoke was once the inky signature of diesel engines everywhere. Now it has all but disappeared. A 1998 Model Year truck actually belched 35 times more smog-producing NOx and 60 times more Particulate Matter than equipment built to meet 2010 emissions standards, and that’s before regulators turned their attention to Greenhouse Gases.

The trucking industry’s environmental gains have not been limited to diesel, of course. Clean-burning fuels from natural gas to propane autogas, and even battery power, are now viable options – especially where medium-duty trucks and predictable operating ranges are involved. Nikola Motors has taken a further leap, pledging to produce electric Class 8 trucks as early as 2020.

Still, there is no mistaking a change in the underlying business climate. Steep diesel prices helped to make the business case for alternative-fueled equipment, which tends to come with premium price tags. Now diesel is relatively cheap. A new administration in the White House, meanwhile, wants to slash funding for the U.S. Environmental Protection Agency, which largely sets the emissions rules applied to equipment sold in Canada.

Don’t prepare to burn coal dust just yet. The push for cleaner air continues, even if it originates from a source other than the U.S. federal government. California, for example, remains committed to reducing Greenhouse Gases to 1990 levels by 2020. “In California we are not debating climate science,” said Jack Kitowski, chief of the California Air Resources Board’s (CARB’s) mobile source division, in a presentation during the recent Green Truck Summit in Indianapolis. “The facts will end up speaking for themselves.”

Canada’s federal government has aggressive targets of its own. Overall limits set for 2030, including emissions from other sources and industries, would require eliminating the same volume of gases currently generated by every existing vehicle on the road and then some, said Jody Proctor, Transport Canada’s director – clean air policy analysis. About 25% of the unwanted Greenhouse Gases currently come from transportation, and trucks account for 30% of that.

“Transportation,” she added, “clearly needs to be part of our climate change solution.”

Part of the solution will even involve changes to the fuel that is burned. This February, the Liberal government released a discussion paper as a prelude to clean fuel standards, to come by 2019. They’re the types of standards that in British Columbia and Ontario already require 4% of every tank of diesel to include renewable fuels like biodiesel.

Wilfried Achenbach, Daimler Trucks North America’s senior vice president – engineering and technology, just wants options to be compared fairly. Commitments to reduce Greenhouse Gases will require the trucking industry to “put on the brakes” when it comes to its thirst for diesel, he agrees. But a focus on “well to wheels” also considers emissions that emerge when producing different energy sources capable of moving a vehicle.

“Electricity is not for free environmentally,” he explains. In the U.S., 39% of that power comes from burning coal, and 28% is from burning natural gas, which means diesel and electric powertrains are equally as clean. Each generates about 1.7 pounds of carbon dioxide to create a kilowatt-hour of energy. “Currently with our energy mix, it doesn’t make any sense to go electric,” he says. A shift in the equation would require more of the electricity to be produced through renewable sources like wind turbines or solar panels. That would require political will. And money.

Even when an electric option is possible, it’s not necessarily practical. A tractor-trailer weighing less than 80,000 pounds might travel 950 kilometers on 450 liters of fuel, which itself will weigh 840 pounds including the Diesel Exhaust Fluid. Based on a 2022 forecast, a battery pack capable of that range will weigh about 11,000 pounds and cost more than $150,000, he says.

In colder climates like those in Canada, some electric vehicle ranges have also been 70% of those seen in warmer settings.

It helps to explain why electric rollouts have so far focused on lighter commercial equipment. But a business case for these zero-emission vehicles is clearly emerging. Several major cities around the world have announced goals to restrict access to internal combustion engines.

“This is the future of the industry,” said Jecka Glasman, Fuso’s president and Chief Executive Officer, as her company unveiled a Class 4 electric truck known as the eCanter. “It’s going to be busy, it’s going to be crowded, but goods are still going to need to be delivered.”

Ford, meanwhile, has just -expanded its Qualified Vehicle Modifier program to include companies like XL Hybrids, Lightning Hybrids and Motiv Power Systems that develop and install electrified and hydraulic hybrid powertrains. It’s not all about powering the lightest pickups, either. Options already include the Ford F-650 and F-750 medium-duty trucks, Transit and E-series vans and chassis.

Such clean-running vehicles deserve to be seen as more than experiments. As recently as three years ago, most of CARB’s financial incentives focused on early research and development. Now the money is more likely to be invested in ways to commercialize the equipment that emerged.

“We’re past the teething issues of reliability,” says Reuben Sarkar, the U.S. Department of Energy’s deputy assistant secretary for transportation, referring to 30 makes and models of zero-emissions vehicles now on the market. “You’re going to be getting falling technology costs in the future.” The battery power that cost US $1,000 per kilowatt hour in 2008 is expected to cost $125 by 2022. Once it reaches $80 per kilowatt hour, the battery costs align with diesel and gasoline prices.

Environmentally friendly options are not limited to batteries, of course. Available fuels include renewable forms of propane, natural gas, and even diesel. Dimethyl Ether (DME) can be produced from organic waste. More readily available alternative fuels include propane and compressed or liquefied natural gas.

“Heavy trucks that replace diesel with natural gas reduce their [Greenhouse Gas] emissions up to 25%,” says Stephanie Trudeau, senior vice president – regulatory framework, customers and communities at Quebec-based Gaz Metro, which distributes the fuel. The switch could save 35 tonnes of Greenhouse Gases per truck per year. Generate the natural gas from organic waste, something that is already fueling some waste management fleets, and the truck will save up to 195 tonnes per year.

Quebec, for its part, just renewed a package of financial support for natural gas vehicles and fueling networks.

“There’s a certain amount of demand that’s going to be there even in a low–diesel-price environment because customers have a duty cycle that’s just perfect for natural gas,” says Cummins Westport president Rob Neitzke. Think of medium-duty fleets that can be -refueled overnight with slow-fill Compressed Natural Gas connections in a shop, or operations with Gross Vehicle Weights under 80,000 pounds that can be pulled with available 12-liter engines.

Besides that, natural gas is still cheaper than diesel, he notes.

“Even with diesel prices being lower, propane prices are pretty cheap as well,” adds Todd Mouw of Roush CleanTech, which makes and installs related fuel systems. And where diesel engines can now produce as little as 0.2 grams of NOx per horsepower hour, propane models hover around 0.05.

The options are not limited to school buses, either. Displays at the recent Work Truck Show included a Ford F-650 that runs on propane, and an F-750 medium-duty box truck that was being tested by a local bakery. Not only that, there is no need for a Diesel Particulate Filter and the related regen cycles, says Tucker Perkins, chief development officer with the Propane Education and Research Council. Other advantages when compared to diesel include longer oil drain intervals and quicker starts. Each tank stores about 85% of the content found in gasoline.

“We won’t necessarily get where we need to be overnight,” she says. “But we are really laying the groundwork.”

Jim Castelaz, Chief Executive Officer of Motiv, refers to the way electric powertrains were once relegated to special sections of the Work Truck Show. Now they are displayed front and center along with their gasoline and diesel counterparts.

“The future is bright for electric trucks,” he says. “There is really a general interest across the industry.”

Sure, diesel is cheap today, but for how long? Many buyers are exploring equipment that will be in service for eight to 12 years, Castelaz adds.

“That’s a long time to lock yourself into a very volatile resource… tomorrow’s prices will not be what they are today.”