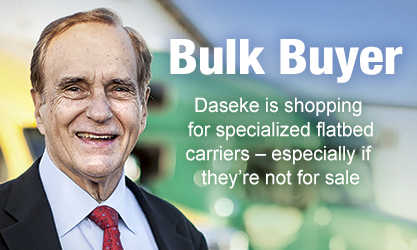 STEINBACH, MB — Big Freight Systems wasn’t for sale. The Coleman family had been running the business since 1948, when they bought South East Transfer in Steinbach, Manitoba. Chief Executive Officer Gary Coleman was focused entirely on finding ways to grow.

When a courier package arrived from Don Daseke, proposing a potential sale, he simply filed it away.

“His philosophy on business, his ­philosophy on people, his philosophy in terms of driving success forward through collaboration, all ran very close to me,” Coleman recalls. “I got comfortable with his long-term plan.”

That plan is to consolidate fleets in an industry sector dominated by ­family-owned businesses. The Texas entrepreneur has secured more than 3,800 trucks and 8,200 trailers so far, accounting for about 1% of what Daseke estimates is a US $133 billion market. The business reported $30 million in revenue in 2009, growing to a pro forma of $869 million last year. And more acquisitions are in the works.

Daseke refers to himself as an accidental trucker. He began his career as an auditor, held roles at IBM, and later built a residential real estate business that sold for US $1.7 billion. He first invested in trucking nine years ago only after a friend introduced him to Smokey Point Distributing, which specialized in aviation cargo. That became the first of today’s 13 operating companies.

As hungry as he is to acquire new companies, Daseke shows little ­interest in fleets that are actively for sale. “Companies are on the market for a reason. They have management issues. They have financial issues,” he says. Instead, he likes to invest in people who will stick with the business, particularly if the operation has more than 100 trucks. The average age of a Chief Executive Officer at the helm of a Daseke-acquired fleet is 52, typically representing the second or third generation of a family in business for more than 50 years. “They know that there are cycles in trucking and they understand that, and they figured out how to manage those cycles,” he says.

“The name doesn’t change. The ­people don’t change. We don’t ­eliminate a single person,” Daseke stresses. But the ­businesses hardly stand still after a ­purchase. An average acquisition’s Earnings Before Interest, Taxes, Depreciation, and Amortization grows 20% within 24 months, he says.

Things that are shared include ­sophisticated financial reporting ­processes, which are a must for ­publicly traded companies but often beyond the reach of smaller businesses, as well as enhanced purchasing power. The ­leaders of individual fleets are able to share ­challenges and solutions with one ­another, along with a common goal of growth.

Employees also become business owners in their own right. On October 1, members of the Big Freight Systems team – including the drivers – became eligible for Daseke’s unique stock sharing plan.

Some people asked if there was a catch when the plan was first introduced, Coleman says. “There’s no catch.”

“When people own stock in your ­company, they act differently. They’re more apt to give you suggestions and ideas,” Daseke explains.

Employee retention is a key to ­success, he says, adding that it’s ­especially important when it comes to the “special breed” of open deck drivers who face a job with physical demands like ­tarping and strapping loads. The company doesn’t release its own ­turnover figures, but thinks they are
below the national average.

And Daseke wants more of drivers and fleets alike to join the family.

“Our mandate from Don Daseke is to grow our footprint in Canada through doing deals with good companies that are in the specialized field, that want to join the journey,” Coleman says. “The entrepreneurial spirt at Daseke is alive and well.”