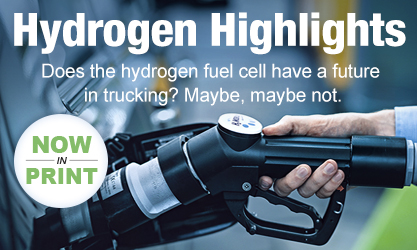 Alternative transportation fuels have been on the horizon for as long as most of us can remember, some of them seeming oh so close to commercial use, some a long way off. One of the options is hydrogen.

Well, let’s clarify. Hydrogen itself isn’t usually seen so much a fuel as an energy carrier, and in terms of motive power we should think of it as a source of -electricity by way of a chemical reaction within a fuel cell. As in the recently introduced Nikola One long-haul tractor that promises so much.

There are others, though, who think hydrogen can indeed be used directly as a fuel in what’s known as a Hydrogen Internal Combustion Engine (HICE). One company in Delta, British Columbia, Hydra Energy, says it can convert any internal combustion engine to run on hydrogen directly, diesel trucks included, and will charge nothing for the switchover. Users pay only a fixed long-term price for the hydrogen they use. The key here would seem to be that Hydra doesn’t use any fossil fuels to -create the hydrogen it sells, rather collects ultra-low-cost waste -hydrogen emanating from various common -industrial plants.

Hydra is working closely with engineers and chemists at the University of British Columbia and was just awarded a significant cash prize through the Ignite Awards program run by the BC Innovation Council.

Not coincidentally, Hydra’s chief -technology officer is Jo Borck, who has 30 years of hydrogen fuel cell experience, including 20 at Ballard Power Systems
in nearby Burnaby. That company remains the global leader in fuel-cell research and development.

Hydrogen itself is the most abundant -element known to man, as well as being the simplest – just one electron and a -solitary proton – but every other atom starts with a combination of hydrogen nuclei. Meaning that it has to be -separated from other compounds before it can be used. It can’t simply be collected.

The fundamental downside of using hydrogen to produce motive force is that its separation from other elements demands power. Getting enough hydrogen to equal the energy content of 3.7 liters (1 US gallon) of gasoline, for instance, requires about 7.5 liters (2 US gallons) of water and 45 kilowatt-hours
of electricity.

Why expend energy to make energy?

As a means to move trucks – or cars and buses and trains and even planes – in an age of environmental awareness, the point is emissions. Or lack of them. The fuel cell in that Nikola tractor powers electric motors to move the truck and emits nothing but water vapor. There are no carbons involved.

Hold on. The thing is, to split water into its two component parts – hydrogen and oxygen, or H2 and O – the most common means by far is a process called steam reformation of methane derived from natural gas. About 95% of the world’s industrial hydrogen is produced this way. And natural gas being just another fossil fuel, there are, of course, unwanted emissions resulting from the process.

A much better choice in environmental terms would be to use biomass in place of natural gas, but we’re not there yet with a commercialized – –
read, affordable — way to do it. Other options exist but they’re no closer to real-world use.

So that gorgeous Nikola tractor with its long range and strong performance is not quite as clean overall as you might think. It emits nothing but heat and water vapor as it rolls down the road, but behind the scenes a fossil fuel is burned to propel it from A to B. There’s still a net gain but it can’t be called a truly zero-emissions heavy truck.

Nikola says it might erect a 100-megawatt solar farm to produce electricity for conversion of water to H2 through -electrolysis, thus avoiding the downside of using natural gas.

I’ll go to the authority for a definition, namely the Canadian Hydrogen and Fuel Cell Association (CHFCA):

“Fuel cells operate much like a battery, except they don’t require electrical recharging. A battery stores all of its chemicals inside and converts the chemicals into electricity. Once those chemicals run out, the battery dies. A fuel cell, on the other hand, receives the chemicals it uses from the outside; therefore, it won’t run out. Fuel cells can generate power almost indefinitely, as long as they have fuel to use.

“The reactions that produce electricity happen at the electrodes. Every fuel cell has two electrodes, one positive, called the anode, and one negative, called the cathode. These are separated by an electrolyte barrier. Fuel goes to the anode side, while oxygen (or just air) goes to the cathode side. When both of these chemicals hit the electrolyte barrier, they react, split off their electrons, and create an electric current.”

In a nutshell, fuel cells are devices that unlock the power of hydrogen, first invented in 1839 and called a “gas battery”. Nothing much happened with the idea until 1960 when the U.S. National Aeronautic and Space Administration (NASA) needed a practical power source for extended space missions. Fuel cells were the answer and are now used extensively in outer space.

In many applications, says the CHFCA, hydrogen is the actual fuel that powers a fuel cell, but certain fuel cell technologies run on other fuels like natural gas or even diesel.

The fuel cell’s advantages over other power sources come down to two main things: one, they offer high fuel efficiency while emitting extremely low emissions, at least locally. And two, in an engineering sense, they’re simple – they can run on a wide variety of fuels, and depend on electrochemical reactions, meaning no moving parts. Thus, they’re simple to operate, quiet, and reliable.

Among other advantages, a hydrogen fill-up takes just minutes compared to the hours required to recharge an -electric vehicle.

Detractors say fuel cells won’t last as long in a typical car as an ordinary -gasoline engine – like 120,000 vs. 320,000 kilometers, the fuel cell being the lesser of those two. But it would seem there are as many estimates of that comparison as there are “experts'” to do the estimating, and some say there’s really no difference.

The other downsides, and they’re big, include the near complete lack of infrastructure and the high cost to build and then buy fuel cells. The first fuel-cell car on the market, a Honda, came along in 2010 and cost US$1 million to build. The cost has come down dramatically since then but it’s still not cheap.

That said, there are many city buses around the world already running fuel cells successfully, and Ballard Power Systems says its fuel cells have powered buses for more than 10 million cumulative kilometers of revenue service. It claims a 350-kilometer range between refueling, with rapid refueling in as -little as  seven minutes, and much better fuel economy compared to diesel buses (1.5x) and Compressed Natural Gas buses (more than 2x).

You’ll be surprised to know that -variations on the fuel cell will be used, some day quite soon, to power laptops and even mobile phones. A little less fancifully, in London, England, this coming summer will see the deployment of a fleet of Suzuki scooters by the city’s Metropolitan Police, part of a hydrogen fuel cell technology fleet trial. The scooters will use 4kW air-cooled fuel cells made by Britain’s Intelligent Energy Group.

“This brings closer the commercialization of hydrogen fuel cell scooters,” the company says.

The 4kW fuel cells used in those scooters offer power for other applications, says Intelligent Energy, including -auxiliary power.

In fact, the diesel-fuelled APU we know and love is a prime candidate for fuel cell use, and Freightliner developed one back in the late 1990s. Though it seems not to have gone anywhere, in 2006 Modine Manufacturing introduced an idle-reduction system using zero-emissions fuel cells and a non-Greenhouse Gas, carbon dioxide, as the refrigerant. It was intended for both cooling and heating the sleeper cab, using a hydrogen fuel cell power pack specifically designed to produce electrical energy continuously for more than 10 hours.

More recently, at the 2014 IAA show in Germany, Eberspaecher showed off a fuel-cell APU that -converts diesel to hydrogen and then to electricity and thereby -supplies all electrical demands. Entirely independent from the engine, it takes the load off the alternator, resulting in lower fuel consumption and emissions.

“In future generations of trucks,” the company said at the time, “components still driven mechanically today could thus be powered electrically at considerably less expense.

“Not only does our system solve the energy problem during stationary periods, rather we’re pursuing a new, holistic approach to on-board power supply in the truck that… decisively enhances operating efficiency.”

It’s intended for use not only during stationary periods but on a permanent basis. When the truck engine starts, the fuel-cell system starts as well, -supplying all electrical demands. Many energy-intensive consumers previously coupled with the drive engine, such as the air compressor, could in future be operated considerably more efficiently by electric means via the fuel cell system.

At the time, Eberspaecher planned to launch the fuel-cell APU in the North American market at the end of this year.

While the Nikola One may be the most exciting fuel cell application on the horizon, the Eberspaecher idea could well be just as significant in the long run.