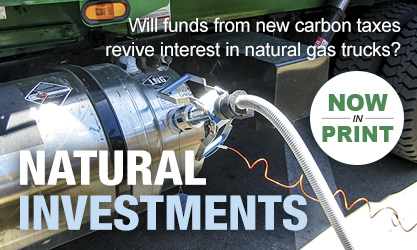 Times were different when C.A.T. signed the deal for 100 trucks that run on Compressed Natural Gas. The Canadian and U.S. dollar were essentially valued at par, increasing the fleet’s buying power on U.S.-made equipment. Quebec’s provincial government also pledged $15,000 per truck, helping to offset any sticker shock around the emission-friendly designs, and natural gas was clearly cheaper than diesel when oil was close to $100 per barrel.

That was August 2014. With today’s exchange rate and equipment prices, the same trucks would cost about $50,000 more than their -diesel counterparts, says Daniel Goyette, president of the Quebec-based fleet. As for the price of oil? “At $50 per barrel, the way it is now, there is no ROI,” he says. “Nobody wants to give you a decent residual at the end because they don’t know what the market [for the equipment] is going to be.” 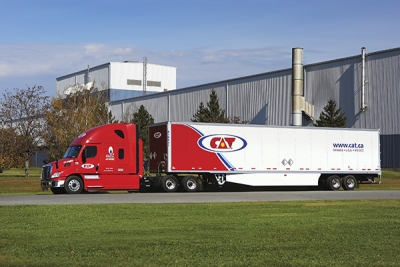 But Goyette remains committed to the fuel and equipment alike. Through a partnership with Ryder his trucks can travel from Quebec to Mexico, tapping into a network of five fast-fill fueling stations along the way. The financial returns will emerge when the price of oil begins its inevitable rise, he says.

Other fleets thinking about a switch to natural gas could expect some support of their own. Carbon taxes and cap-and-trade systems are increasing the cost of diesel – most recently in Ontario and Alberta – but they’re also generating funds for low–carbon technologies. Ontario, for example, has pledged $250 million over the next five years to reduce carbon emissions from heavy trucks. And the Canadian Natural Gas Vehicle Alliance estimates that -natural gas vehicles -generate 20-25% lower carbon emissions when total lifecycles are considered.

The barriers are not limited to cost alone, of course. Westport abandoned its 15-liter GX engine that could support heavy Gross Vehicle Weights and Long Combination Vehicles; Cummins put its plans on hold as well. But Goyette doesn’t see that as a problem. The vast majority of trucks running between Ontario, Quebec and the U.S. still weigh less than 80,000 pounds, making them candidates for 12-liter engines like the ones used by C.A.T., he says. The fleet addressed challenging hills by selecting flatter routes and 13-speed transmissions. Besides that, dual-fuel systems are available for companies that want to build on larger diesel blocks.

“I’m quite optimistic about where we’re going in the next couple of years,” says Bruce Winchester, executive director of the Canadian Natural Gas Vehicle Alliance, referring to the opportunities for natural gas. “We don’t expect every single vehicle to be running on natural gas … [but] there is some opportunity to deploy new technology and ensure infrastructure is up to speed.”

That will still come at a cost. It’s one of the reasons the Ontario Trucking Association (OTA) is asking its provincial government to offer up to $60,000 per natural gas vehicle, stressing that funders should consider more than vehicle and fuel station costs alone. The typical rollout of a mid-sized natural gas fleet can cost $68,000 in management or consulting time, according to Natural Gas as an Alternative Fuel for Canadian Truck Fleets, a white paper commissioned by the group. Simply evaluating the alternatives can take anywhere from 200 to 500 hours. Another $19,500 would be needed to track any deployments, gathering the data needed to support future investments.

“Ancillary” fees such as management time and evaluation, training, monitoring, and shop upgrades can account for 9% of the related investments, the white paper concludes. Training, for example, might cost $2,000 per technician and $200 per driver.

Goyette agrees that the training is vital. “We didn’t do enough,” he admits, referring to messages that need to be conveyed to drivers – not just about how the trucks work, or even solving the anxiety about equipment ranges, but how each driver is playing a role in the industry’s future. Maintenance teams certainly need to prepare to work with spark plugs and unique engine oils, even if they don’t have to worry about carrying Diesel Exhaust Fluid. “Education is going to be the big key to the success,” he says.

“Trucking companies are in the business of moving freight. We are not fuel transition experts. The more the Government of Ontario’s program assists the industry in making a seamless transition to natural gas, the greater the likelihood the program will be successful,” says Stephen Laskowski, OTA president. “Without assistance and funding in these critical areas, fleets can easily become frustrated, making a successful conversion to natural gas vehicles less likely.”

There’s no denying the higher upfront purchase costs for the equipment itself. American Power Group offers conversion kits for diesel engines, adding about $20,000 to $40,000 to equipment prices depending on tank sizes and configurations. Smaller-displacement engines including the Cummins Westport 11.9-liter ISX 12G and 8.9-liter ISL G can cost $10,000 to $25,000 more than an equivalent diesel engine. And a Class 8 back-of-cab system that holds 160 Diesel Gallon Equivalents (DGE) of fuel can cost $50,000 to $75,000, while saddle tanks holding 60 DGE can cost $30,000 to $50,000.

A growing network of fuel stations – particularly those that offer fast-fill capabilities – have helped Compressed Natural Gas offset advantages once held by Liquefied Natural Gas, which has traditionally been seen as the best option for over-the-road trucks and their longer routes, the Ontario white paper concludes. Drawing on natural gas stored at 4,300 psi, a fast-fill station can fuel a Compressed Natural Gas vehicle in about the same time it takes to fill a diesel tank.  “Vehicle operating range anxiety has diminished with recent improvements from fuel system providers to increase capacity,” the authors add.

The cost of the fueling stations themselves depend on the size and number of compressors, which will be dictated by estimated demands for peak times, the existing location of natural gas utility lines, property costs and access, not to mention the unique demands of local operating authorities. Recently opened fast fill stations have been built for between $2.1 and $2.7 million, not including the price of the land itself, the OTA report concludes.

Maybe that explains why fueling opportunities are still limited. At this point, Ontario has just six natural gas fueling stations open to the public. There are 1,600 Compressed Natural Gas stations across North America, including 80 public fueling stations in Canada. Many sites are privately controlled. It’s the classic case of chicken and egg. Fueling networks need a higher volume of trucks; trucks need fueling networks to reach their destinations.

Establishing the fueling network was one of C.A.T.’s biggest challenges. The site that was ultimately located in Carolina, for example, required trucks to travel out of route for a few miles on their north-south routes.

The best fueling option will always depend on duty cycles, Winchester says. The question is whether the fueling option needs to fit a fleet, or if the fleet might want to change business practices to match the fueling option. Maybe a smaller engine displacement will work. Trips could be rerouted.

Fueling infrastructure can be shared between fleets and station operators, too. “Not all Class 8 fleets will elect to build their own stations, choosing instead to rely on public fueling stations. Nonetheless, fleets who choose to use public stations can pay close attention to pricing and contract provisions – negotiating for pricing concessions based on volume commitments, assured fuel quality, and suitable accommodations during station outages,” the Ontario Trucking Association report says.

Government support will make an undeniable difference in embracing any of this, Goyette says, referring to a role for those that want to limit carbon in the first place. “We really need some help.”