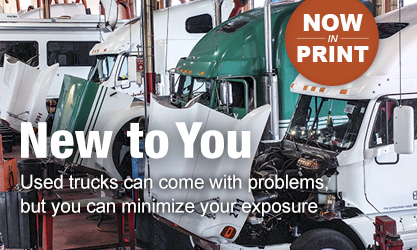 The days of walking around a truck and kicking the tires to see if it’s a worthy investment are over. Much of what could cause problems with a used truck is no longer visible to the naked eye. Frankly, if a vehicle has obvious -problems, it’s probably wise to avoid it. In the hunt for a reliable machine today, a used truck buyer’s best asset is research skills.

It’s safe to say that every truck is different, and at some point the condition of the truck on the day you’re kicking its tires really depends on how the previous owner looked after it. It’s also a fairly safe bet that if a particular make, model and year had a recurring problem, the vehicle you’re considering will likely face the same issue.

That’s not to say you should avoid such a truck altogether. Dale Tower, vice president of remarketing for AmeriQuest – a remarketing and procurement -service provider for the Canadian -market – suggests truck buyers try to find out whether the problem was resolved by the manufacturer through a repair campaign or a redesign of the failed part.

“Do your research on past performance of specific models and model years,” he says. “If there were problems, people will be writing about them online. Google the make, model and year of the truck or component and see what you get. Some OEMs issue repair campaigns. You’ll find information on those by doing your research as well.”

Try to ensure the repairs have been made. If you can’t satisfy yourself they have been resolved, keep looking. If the work has been done, the truck is once again a good prospect. Maybe an even better prospect because you know you’re not going to have that problem.

Scott Taylor, president of Tayson Truck and Equipment in Saskatoon, believes the darkest days for truck emissions systems problems are behind us, but he cautions that we’re not yet out of the woods.

“The earliest generations of EPA-regulated emissions systems trucks were bad,” he says. “But we are seeing trucks now with a million of more kilometers on them that the original owners had very little trouble with. And we’re getting back some fuel economy with the later models. All round I have to say things are looking up.”

Diesel Particulate Filters (DPFs) remain a concern for used truck buyers, Taylor says, because it can be difficult to check the service history of the device. Fortunately, they are easy enough to inspect visually. And, as Tower notes, the replacement costs are dropping.

With aftertreatment systems so costly to maintain, there will often be shortcuts taken, and the proper -maintenance and repair protocols may not have been followed, cautions Scott Perry, Ryder System’s vice president – supply -management.

“[With] an upstream failure, such as a turbo seal or a coolant leak in the block that dumps a lot of foreign material into the aftertreatment system, if you haven’t really maintained that system properly there’s a high degree of probability that the system will not perform the way it should. Or worse, it might suffer a catastrophic failure with the second owner,” he warns.

An inspection and proper cleaning isn’t terribly expensive. It’s certainly less than the cost of a replacement, and could be a bargaining chip with the seller.

The other big unknown is the failure history of various sensors
and sensitive electronics on the truck. Here, maintenance and warranty records will be invaluable, but they are not always -available from the seller.

“When someone buys a vehicle from Ryder, they have access to that information and what work has been performed,” Perry said.

Tower says a lot of his customers ask for maintenance records, but some fleets do not like to give them out for legal purposes. In some cases a used truck can change hands many times over the course of a sales cycle – through wholesalers, brokers, and dealers – and records can be lost or forgotten, or -misplaced.

“You can’t always depend on getting the records you might hope for,” says Perry. “But if you can determine the truck’s original owner through its paint scheme or from the silhouette of the decal on the door, you might have an idea of the previous owner’s reputation for maintenance.”

It’s always wise to have any truck you’re considering inspected by a mechanic of your choice. If possible, the inspection should include an Electronic Control Module download and a search for whatever previous fault codes remain in the system. Granted, these are sometimes wiped by the previous owner prior to releasing it for sale.

Taylor says he inspects everything they buy, but at the end of the day, they are used trucks. There are going to be problems.

“We do everything we can to catch problems, but we can’t get it all,” he says. “There are some things you can’t see during an inspection.”

If you’re thinking that maybe it’s not worth spending a few hundred -dollars on an inspection, consider these -estimates of the operating cost of a used truck -compared to a new truck.

It may have a big diesel engine, 10 big tires, a place to sit while driving and a place to sleep when you’re not, but is it really a truck? Glider kits were once an accepted part of trucking where owners could buy a new cab and chassis and then install the powertrain from an older or perhaps wrecked truck. Gliders were a cost-effective way of extending the life of some valuable components.

Glider kits are also a cost-effective way of skirting recent environmental regulations requiring the installation of expensive and sometimes unreliable emissions systems. Due to quirks in the way some provinces register commercial vehicles, lots of these glidered trucks slipped into the system over the past five to 10 years, and have remained more or less invisible to registrars of motor vehicles and regulators alike. That’s changing now, albeit slowly.

If the used truck you’re thinking of buying is actually a glidered vehicle with a good registration, you probably won’t have any difficulty transferring the ownership and reregistering it, as long as it passes the required safety inspections. Some provinces use a split registration, showing the Vehicle Identification Number (VIN) of the glider cab and chassis, and another for the engine. Others register the truck using a single VIN number, usually from the donor vehicle the engine came from. Newfoundland and Labrador, for example, registers these vehicles as “glider kits”.

You can see where that might cause some confusion when it comes to establishing the model year of the vehicle with regard to emissions compliance.

This is a vexing and complicated problem, compounded by the fact that there’s little agreement across provincial boundaries on how to treat gliders. They may be acceptable to some provincial registrars, but not others.

Alberta, for example, prohibits operating vehicles that lack a final compliance label or National Safety Mark from a certified builder, but will issue an exemption from this requirement to allow a truck built from a glider kit. There’s talk in Alberta of -curtailing the issuance of permits, but it’s not clear if and when that may happen.

New Brunswick will register glider kits provided they have been inspected by a provincially certified engineer and certified as safe and roadworthy.

Transport Canada isn’t much help in this discussion. Documentation from the federal agency clearly states it does not recognize glider kits as vehicles because they are incapable of being driven (we are paraphrasing here), lacking an engine and a drivetrain. Thus, Transport Canada deems them to be “assemblages of parts,” and by extension, claims they do not have jurisdiction to regulate them.

However, Transport Canada prohibits the importation of assembled or completed glider kit trucks – those having engines, transmissions and drivetrains including rear drive axle and being capable of driving under their own power – because they were not assembled by an Original Equipment Manufacturer and therefore lack a manufacturer’s compliance certification for the Canadian Motor Vehicle Safety Standards.

But Transport Canada does allow the importation of the kits themselves; that is the cab, chassis, steer axle and the parts needed to assemble it. We have vastly simplified this discussion, but the department has published a document that explains the restrictions and exemptions. Google: “Transport Canada Position: Glider Kits – Heavy Truck Industry” for a more -thorough explanation.

The other potential problem for -owners or prospective owners of glidered trucks is National Safety Code Standard 11 – Maintenance and Periodic Inspection Standards. The latest update to NSC 11 was published in October 2014 and is being added to provincial regulations on individual timelines. Among the requirements of the revised standard are inspection procedures for emissions aftertreatment systems, which were not previously covered in the standard. Trucks being inspected must meet the requirements for their respective model years. So, if you have a glidered truck registered as, say, a 2014 model, but with a 2006 engine, the glider probably won’t have the emissions hardware required by the model year on the registration. Depending on how the vehicle is registered, this could mean you’d fail the inspection and would not be able to register the truck.

If you’re considering buying a used glider truck, check with your local registrar of motor vehicles to make sure you’ll be able to register the vehicle. If you are selling a glidered vehicle, check with your jurisdiction’s Ministry of Transportation to see where the regulators stand on NSC 11, how they recognize glidered -vehicles, and how they handle such trucks that may not comply with inspection requirements for emission systems.