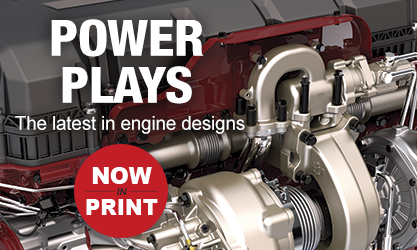 Most North American heavy-duty diesel engine manufacturers rolled out substantially revamped engines to meet the U.S. Environmental Protection Agency’s (EPA’s) 2017 Greenhouse Gas emissions regulations. Those rules were the final step for diesel engines in Phase 1 of the grand carbon dioxide reduction plan. Engine makers now have a few years to figure how to meet the next – and even more restrictive – round of fuel-efficiency improvements, which come into force for Model Year 2021 engines.

According to DieselNet, an independent online information service covering technical and business information on diesel engines, 2017 Model Year heavy-duty diesels have limits of 460 grams/bhp-hr for carbon dioxide -emissions, which translates into a fuel consumption limit of 4.52 gallons/100 bhp-hr. While that won’t mean much to most of us, it forces truck makers to improve fuel economy between 7% and 20% -compared to Model Year 2010 engines. And, by popular demand, they also had to improve reliability.

It’s still a bit early to make a call on reliability, but each of the engine reps we spoke with stressed they improved that very thing. We’ll know soon enough.

Detroit Diesel had its compliant engines in production throughout 2016. They will not undergo any significant changes this calendar year. While there are no changes to the published power ratings, oil drain intervals have been extended to 80,000 kilometers for normal on-highway service. 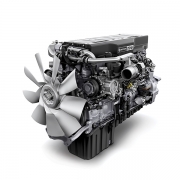 The new portal will also serve as a hub for other Detroit Connect features available in 2017, such as Remote Updates. This gives fleets the ability to remotely change select engine parameters, such as maximum road speed, as well as receive Detroit-initiated engine and powertrain firmware updates without having to stop and physically connect the vehicle at a service center.

Detroit Connect Analytics will be -available in the first half of this year, and will enable fleets to quickly identify behaviors, trends, root causes and key insights on fuel consumption and safety performance data across the fleet.

“Using the new portal, fleets also have more power to customize who gets access that information so that the right people get access to the right information to make decisions,” says Greg Treinen, Detroit’s sales and marketing manager for connectivity. 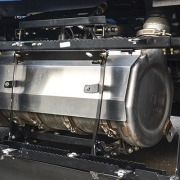 Paccar says it has done some tuning around the injectors and pistons on the MX-13 to drive further efficiencies in the combustion cycle. Additionally, engineers have opted for two different turbochargers for engines above or below 485 horsepower for further -combustion optimization.

The 2017 MX-13 and MX-11 engines also feature a single cylinder air compressor, along with an electronically controlled variable displacement oil pump – based on pressure and temperature, and a variable speed coolant pump – based on heat rejection needs. Together, these eliminate some of the parasitic drag on the engine, leaving more output to drive the truck.

Kevin Baney, Kenworth’s chief -engineer, told reporters last fall the new MX-13 engine will be at least 3% more fuel efficient than the 2016 version of the engine.

“The MX-11, which we introduced in April of last year, and the MX-13, provide 85% coverage of our customers’ torque and horsepower requirements,” Baney says. “With the new round of Greenhouse Gas regulations, we believe the MX-11, with its lower-displacement but still significant torque and horsepower ratings, will provide an excellent alternative to customers in some market segments.”

Last fall, Cummins rolled out two GHG17-compliant versions of its X15 engine – one to satisfy the fuel economy fanatics, the other for performance. Both are essentially the same engine, but the Performance features a few different bits of hardware to give it beefier ratings, while the Efficiency version take advantage of all the latest hardware and software upgrades targeted at fuel economy. 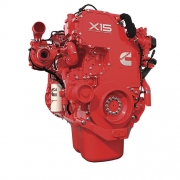 “Uptime was our largest priority heading into 2017,” he says. “Our customers told us, ‘It doesn’t matter what else you do, if the engine doesn’t meet our needs, it won’t be in our fleet.’ So, we made a lot of changes to the basic engine such as using more robust materials in engine construction. We changed the wiring harness to reduce the possibility of water ingress. And we looked hard at some of the late-life, off-warranty failures, usually seen by the second owner after 750,000 miles [1.2 million kilometers], and said we have to do something about these to bring some value back for the secondary market.”

Cummins has modified a long list of components, such as using a more robust Variable Geometry Trubocharger actuator and a revamped Exhaust Gas Recirculation cooler.

The new aftertreatment system is probably the biggest story. With the previous system, manufacturers could package them differently, and that led to variations in performance that had to be managed with sensors and software changes. Now it’s essentially a straight pipe and exactly the same on every truck.

Gone from the X15 is the so-called seventh injector, the external hydrocarbon injector used to regenerate the Diesel Particulate Filter. Nebergall says Cummins now uses a post-combustion injection of fuel that flows out of the cylinder and into the aftertreatment device to heat the substrate to desired temperatures.

Nebergall says customers won’t see much of a difference in the 2017 engine, but the results will reveal themselves in longer maintenance intervals, better performance and drivability, and less unplanned downtime.

The current version of Navistar’s 13-liter N13 engine will remain as is until 2018, but an updated version is scheduled to launch later this month.

“We’ll need to make changes to meet the 2017 [Greenhouse Gas] regs, so we will be introducing a new-generation 13-liter engine at the annual meeting of the Technology and Maintenance Council in Nashville on February 27,” says Jim Nachtman, marketing manager – on-highway products.

Navistar could not share many details of the new 2017-compliant engine, but did hint that it would have a single-stage variable geometry turbocharger, among other new features, and it will share Cummins’ -single-module aftertreatment system.

Navistar nearly doubled the Diesel Particulate Filter (DPF) -cleaning -intervals for the current -product by adding an anti-polish ring to the -cylinder sleeve to remove carbon deposits from the pistons that can increase oil consumption. Reducing oil consumption limits the amount of ash that winds up in the DPF, Nachtman explains.

“We implemented this change some time ago, but resisted publishing the new cleaning intervals until we had enough data back from the field showing the change was effective,” he says.

Navistar is also now allowing the use of lighter-viscosity 10W-30 and 5W-30 engine oils, up to higher -ambient temperatures.

“Reducing oil viscosity increases fuel economy, but if viscosity is too low, engine damage can occur,” Nachtman points out. “Extensive durability -testing in hot conditions has shown that we can increase the maximum allowable ambient temperature to use 10W-30 up to 115 Fahrenheit.”

Navistar will launch a replacement to the current TransStar product in April at Montreal’s Expocam Show, and that truck will launch with the new N13 engine, says Nachtman. “Unfortunately, I can’t share a lot of detail now, but I can tell you the new N13 will be a monumentally better engine.” 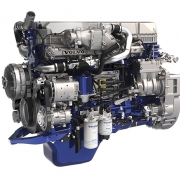 It all begins with the addition of common rail fuel injection. Something new to Mack and Volvo, but in widespread use on other engines. John Moore, Volvo Trucks’ powertrain product marketing manager, says the common rail system allows for multiple injection events at very high injection pressures.

“This allows for very precise injection timing, and because we can introduce the fuel to the cylinder in stages, we get a more complete burn. It improves fuel economy and performance while reducing soot production,” he says. “Combined with the Wave piston design, which came our SuperTruck research, we have almost eliminated [90% reduction, Volvo says] soot from the combustion process, and that take a big load off the aftertreatment system.”

“That puts about 30-50 horsepower right back to the crankshaft,” he says. “We have tuned this as an efficiency enhancement rather than a performance addition. If you have a 450-horsepower engine, you only have to fuel it for say 420 horsepower, taking that much more load off the engine.”

Mack and Volvo have also improved the design of their aftertreatment -system, bringing it into a smaller package and using a copper zeolite catalyst for improved NOX conversion.

Mack and Volvo, of course, use the same basic engine platforms, but program the engines differently for their own specifications. Both companies are saying we can expect fuel economy improvements in the 2-3% range in the small block engine, and up a 6.5% or -better improvement in the mid-range D13 and MP8 engines spec’d for downsped operation.