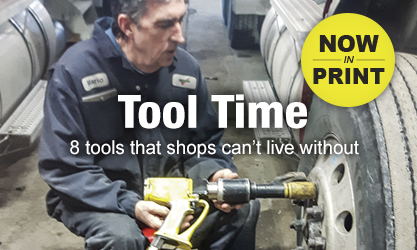 Few things will improve a mechanic’s productivity better than the proper tool. Sure, any wrench will turn a fastener, but a torque wrench will ensure exact clamping force. In the digital realm, the right app can offer quick access to underlying fault codes and even help to refine shop schedules.

Everyone has a personal favorite, though, so we asked shop leaders across Canada about the tools they couldn’t live without.

“We’d be hopeless without a laptop,” says Westcan Bulk Transport’s Michael Royer, vice president – fleet services. “In our world, everything revolves around electronics now.” The right software also makes diagnostics much quicker, without needing to reach out to dealerships.

The equipment mechanically doesn’t cause us a whole lot of issues,” Royer says. “We don’t do a lot of differential work and springs and bushings.”

But emissions-related components are another story. There, teams are chasing issues such as wires that have rubbed through, and Diesel Exhaust Fluid pumps that failed. Need to reset the injector trim codes? That’s done in house as well.

The laptop is used on more than engines alone. Software taps into the Electronic Control Modules for everything from trailer Antilock Brake Systems to roll stability controls. “It helps you whether it’s a sensor or module or wiring,” he says.

As valuable as the laptop may be, not every mechanic gets one. A smaller shop with a half-dozen personnel might share a unit.

While diagnostic software will -typically run on most off-the-shelf computers, Royer stresses the value of a robust model such as a Toughbook, which can handle the abuse in a shop environment. And there needs to be plenty of memory to support the digital demands of industry software, he says.

A straight path down the highway will maximize tire life and fuel economy alike. Kevin McGurrin, supervisor of the Danfreight Systems Mechanical Workshop, couldn’t live without his alignment system, which has helped to realize both benefits. He chose the shop’s specific system in part because there is no need to lift a wheel and rotate it manually. “The alignment system allows us to validate in 15 minutes whether the alignment of a truck and a trailer conforms to the manufacturer’s standards,” he says.

Macal Bulk Transport in Mission, B.C. recently introduced a system to identify trucks with newly installed wheels, borrowing on a process adopted by Kal Tire. A tag is always placed on the gladhand, reminding drivers that fasteners will need to be retorqued. But that also required a new torque wrench in the shop, says Rick McArthur, who owns the asphalt-hauling fleet. With just the sound of a click, his mechanics now know if the pre-set torque was achieved. “Anybody can use it, and anybody can do it,” he says.

When it came time to build a new shop for Erb Group, one tool topped the wish list, says Jim Pinder, -corporate fleet director: “A five-ton crane in every shop. We have one in the truck shop, one in the trailer shop, one in the reefer shop, from a safety point of view.” They’re used to lift trailers to remove everything from reefer assemblies to engines, and also lift straight truck bodies. That sort of work was previously handled with tow motors.

The crane’s rails run the full length and width of the shop, so it can be positioned where required. Key features included a mounting position close to the roof, to maximize lifting distances, and a remote that had a fine-tuned movement setting for small, slow adjustments.

Supervisors are responsible for the scheduling to ensure work is located in an accessible location, and technicians are trained and certified to operate the cranes.

Bending and stretching can take its toll on a mechanic’s body through the course of a workday. Raising everything to eye level to check things like tire condition can help to ease the load. Serge Bergeron, fleet director with Transport Bourassa, has two hydraulic lifts in his shop. “They are much more practical, versatile and cleaner than pits,” he says, noting how smaller mechanics might otherwise have to climb onto crates to reach different components.

Mullen Group’s Kelly Scheer says the latest engine diagnostic software is vital, especially with the advent of emissions-related controls. Without it, troubleshooting would be a challenge. “Otherwise you’re flashing the dash,” he says. “What sensor did you say again?”

Mullen runs exclusively on Cummins engines, so the fleet has opted for the Insite software platform. And maintenance teams are just beginning to tap into what is possible. There may be more capabilities, he says. They just aren’t chasing the data yet. Yet.

Few tools have transformed work in a shop more than the pneumatic wrenches that are called on to turn virtually any nut or bolt, says Derek Quinn, director of maintenance at TransX Group. But not all of these tools are created equally.

“You don’t want to cheap out,” he says, referring to his preference of known North American brands. The cheaper models quickly lead to trouble. “They work for a good month or two,” he says, but then the internal seals begin to fail. The so-called cheaper options become scrap metal.

In contrast, his own teams will rebuild their tools for years on end.

The support found upstream makes a difference in how often the rebuilds are required.

“You want to have a good air dryer in your system,” Quinn says, noting that regulators have also been installed into the air system wherever a line is dropped – an important step because individual tools are regulated for specific pressures.

There will come a time when soot and ash will need to be cleared out of a Diesel Particulate Filter. And there are systems that will do the job with a pulse of air or “air knives” that move from cell to cell.

Jean St-Onge, vice president – fleet maintenance at Midland Transport in Dieppe, New Brunswick, believes his “game changer” comes in the form of a chemical-based system that feeds into the intake, cleaning that, the exhaust, turbocharger, and Diesel Particulate Filter in a single step.

St-Onge can’t yet reveal the name brand of the tool he chose, because it’s a prototype. But he was willing to make the investment after seeing it at work in a vendor’s facility near Montreal.

Trips to an Original Equipment Manufacturer for such work can quickly become expensive, he says, referring to repairs that can escalate to $30,000 when replacing a Diesel Particulate Filter and turbocharger. Once the cost reaches that level, it is hard to justify the project. “I’m now going to do the same thing for under $1,000, and the truck is going to be up and running in eight hours.”

One more … The power of an oscilloscope

A voltmeter simply shows the average voltage, he explained during a recent presentation to the Technology and Maintenance Council. An oscilloscope reads the entire conversation, which can then be compared to a reference waveform taken from a truck that is working as it should.

It can make a particular difference when trying to troubleshoot often-frustrating intermittent failures, which typically lead shop teams to replace a component with a “known good part” and hope for the best.

“Intermittent problems always exist. They do. It’s just they happen so quickly sometimes, our digital multimeter can’t see them,” Littleton said. The same can be said for the Electronic Control Units.

Some tools simply work faster than others.

A good digital multimeter can sample data at about 1/1000 second, and even some of the newest models work at 1/4000 second. An oscilloscope – something that he describes as a really fast multimeter – can review a billion events in a second.

With a scope, for example, a technician can check camshaft and crankshaft position sensors in just four minutes. Following a traditional mechanical process, it could take four hours to discover a setup that is off by one tooth, he said.

And nothing is more precious to a shop than time.