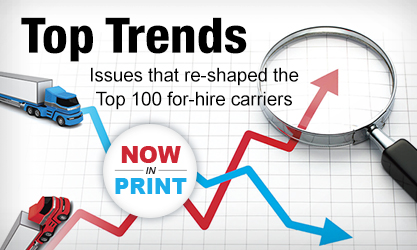 Meyers Transport is gone. After 90 years in -business, and decades on Today’s Trucking’s Top 100 list of Canada’s largest for-hire carriers, the -eastern Ontario fleet shut its doors in mid-January. High capacity and aggressive rate cutting in the Less-than-Truckload (LTL) sector were blamed along with a general downturn in the region’s industrial activity. “It is sad to think there won’t be any trucks and trailers going up and down the road with ‘Meyers’ on it anymore,” observed -chairwoman Natalie Meyers, part of the fourth generation in the family business. The family’s Mortrans truckload and dedicated -specialty service continues, as does Mosaic Logistics, but 190 people lost their jobs.

The tough times in the trucking industry are not limited there. Low oil values continued to suppress freight volumes in provinces like Alberta last year, while a weak Canadian dollar has yet to spur the exports that drive manufacturing-related freight in Ontario and Quebec. Any significant growth in equipment and personnel counts could be traced to mergers and acquisitions.

Cameron Doerksen, a transportation analyst with National Bank Financial, refers to the latter deal as a “game changer”. About half of TFI International’s revenue is now generated in the U.S., and 25% of the total revenue comes from the truckload segment south of the border, he says. “That company has significantly changed its profile as a result of that acquisition.” It may be a game changer for industry mergers and acquisitions as well. TFI International paid XPO Logistics 4.9 times the truckload fleet’s Earnings Before Interest, Taxes, Depreciation and Amortization (EBITDA), Doerksen notes. That’s less than the multiples other publicly traded fleets have paid for their recent acquisitions. It could be the sign of a buyer’s market.

“There’s a lot of activity right now, and I’d say there’s more sellers than there are buyers right now,” says Mark Seymour, president and Chief Executive Officer of Ontario-based Kriska Transportation, referring to smaller companies that want to sell before dealing with challenges like a pending U.S. mandate for Electronic Logging Devices, tougher training standards for entry-level drivers, and rising insurance costs. Kriska has reviewed no fewer than 50 potential purchases in the last 16 months, although none of those were seen as a fit. “It’s not about adding trucks, drivers and trailers. It’s about adding operating companies that can stand on their own two feet,” he says.

“We managed to grow our miles by 6%, although freight was hard to come by. If you work hard and sweep out the corners, there are opportunities,” says Rob Penner, president and Chief Executive Officer of Bison Transport. The growth, while enviable to many fleets, was still 3% off company targets for the year. The fleet didn’t record any acquisitions in 2016, but it is actively looking for opportunities to grow – particularly in Eastern Canada. Many of the fleets that want to sell lack a strong sense of succession planning, he observes. As for operations hoping to sell before December’s U.S. mandate for Electronic Logging Devices, Penner says it’s too late. “Why buy somebody’s problems?” he asks. “There’s lots of good, high-performing fleets available.”

Investments in yards, terminals and warehouses indicated growing businesses in their own right. Maritime-Ontario Freight Lines opened a new terminal in Surrey, British Columbia. Consolidated FastFrate announced in October that it was expanding intermodal operations by spending $10 million on an Edmonton facility, $1.5 million to expand a Winnipeg operation, and $5.5 million for 238 intermodal chassis.

“These are exciting times for our company,” said Ron Tepper, Consolidated FastFrate’s Chief Executive Officer. “We believe in our future and continue to invest in our Canada-wide network of asset-based LTL road and rail services. It, too, is looking to expand in the U.S.”

Gene Orlick, chairman of the Canadian Trucking Alliance and president of Alberta-based Orlicks, agrees with thoughts that expanding companies are in the driver’s seat. An increasing number of Canadian fleets, particularly smaller operations, are looking to escape the frustrations of a driver shortage and higher equipment costs that can be linked to a weak Canadian dollar, he says.

And there is no ignoring the direct link between broad economic forces and the demand for equipment and personnel.

“I believe the outlook for the economy and the oil and gas industry has changed for the better,” Mullen Group CEO Murray K. Mullen recently said in a recent call with analysts. We are well positioned to pursue acquisitions and recapture market share from competitors that have mispriced their services and are over-leveraged. The timing of the recovery or acquisitions is somewhat elusive, but I have a high degree of confidence that 2017 will be the beginning of growth for our organization once again.”

TFI International Chief Executive Officer Alain Bedard noted in a recent conference call of his own that a sluggish Canadian economy, oversupplied domestic LTL market, and downward pressure on rates in the U.S. all hurt the company’s third-quarter revenues. That said, revenues in the Package and Courier market were up, increasing revenues by 3% and operating income by 50%. “Revenue growth in the [Package and Courier] segment was driven by our expanding reach in e-commerce activity. Less-than-Truckload activity remains subdued by a soft Canadian economy, but enhanced by improved operating margins. An ailing North American manufacturing sector is holding back freight volume in the Truckload segment where we are continuing to right-size operations and focus on high-return activities. Lower customer volume is also affecting logistics activities which nevertheless continue to produce superior returns,” he explained. “Soft manufacturing activity has affected volumes, especially in the truckload sector and the lower value of the Canadian dollar has not yet provided the Canadian economy with an appreciable boost.”

But when boosts come, trucks and trailers will be needed to serve them.