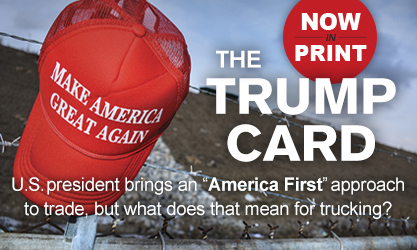 Those were the words that U.S. President Donald Trump used just days before when describing his new administration’s approach to governing. “From this day forward, it’s going to be only America first. America first. Every decision on trade, on taxes, on immigration, on foreign affairs will be made to benefit American workers and American families,” he said in an inaugural address. “We must protect our borders from the ravages of other countries making our products, stealing our companies and destroying our jobs.”

Trade deals including the North American Free Trade Agreement, which governs every load that crosses the Canada-U.S. border, are up for review. The Trans-Pacific Partnership agreement was ended with the stroke of Trump’s pen before it ever reached Congress. His administration has mused about tacking tariffs of up to 20% on goods that come from Mexico, and there’s no shortage of industry equipment made there. Daimler, Navistar and PACCAR all produce trucks in Mexico. Hyundai builds trailers in the southern locale, and Meritor has a plant near Monterrey. Bendix Commercial Vehicle Systems recently doubled production capacity at its facility in Acuna.

Rick Dauch, president and CEO of Accuride, recognizes the factors that helped propel Trump to power. “There’s an angry workforce across the Midwest,” he said, referring to those who lost manufacturing jobs in America’s heartland. While his company produces wheels in Mexico, it also has capacity at a site in Henderson, Kentucky. But a decision to bring all production northward wouldn’t be made too hastily, he said. The company is monitoring what truck and trailer makers do. “We’re going to be where our customers want us,” he said. They’re also watching Trump’s approach to China, especially when it comes to the production of steel wheels. “There’s got to be subsidization going on,” he says, referring to competing supplies of low-cost components.

Maxion Group has two facilities in Mexico, and the global company’s new line of aluminum wheels is being made in Asia. “We’re very comfortable with our presence. We’re a major manufacturer on both sides of the future wall,” says Donald Polk, an Ontario native who is the company’s president – Americas. Only time will tell which trade policies change, he added. “We need to see how things will turn out.”

Not surprisingly, those who make products exclusively in the U.S. are welcoming the promise of tighter trade rules.

“Even before the administration changed, in particular segments I could sense a kind of shift back to a desire to support ‘Made in U.S.A.,'” said Brad Begley, vice president – sales, aftermarket business for Webb Wheel, which casts and machines its products domestically. “It’s premature to suggest what might happen with the administration, but the wind seems to be blowing in that direction,” he said. “I hope that wind turns into a hurricane.”

The challenges around trade restrictions are not limited to the sourcing of trucks and components. Bob Dieli, an industry consultant, told the Aftermarket Week crowd that imports play a significant role in trucking activity. “Most everything spends time in a truck. This building spent time in a truck,” he noted. “We count imports as a plus because the freight has to get from the dock to wherever it’s going.”

There are certainly plenty of imports flowing from one NAFTA jurisdiction to the next — and most of that moves on wheels. Cross-border freight moving between Canada, the U.S. and Mexico amounted to $93.2 billion in the year leading up to October 2016. While truck shipments dropped 3.1% during that time, they still accounted for 60.8% of the value of freight moved to and from Canada, the Canadian Trucking Alliance reports. Vehicles and their parts accounted for the top category. On their own they represented $5.2 billion in trade, 56.9% of which was moved by truck.

One challenge could be a difference in opinion about how the U.S. economy is even performing. Trump talked of rusting factories. Dieli cited an index known as Truck Economic Activity that suggests a period of economic growth. “Mr. Trump seems to think we’re in a different phase of the business cycle. I’m not going to argue with him. You can get hurt doing that,” he said.

Another speaker during Heavy Duty Aftermarket Week offered some unique insight into the approach Trump will take. Jeffrey Hayzlett, a business -commentator and former Kodak executive who was a judge on Trump’s The Apprentice reality show, said the new president is known to act quickly. “He will move, whether you like it or not, with great speed,” he told the crowd.

Dieli insisted real legislative change still takes time. “There’s no legislation that has not been lawyered or legislated to the max,” he said. Even U.S. President Ronald Reagan’s famed tax cuts took a year to enact. But travelers from seven majority-Muslim countries discovered how quickly cross-border trips could be affected when Trump suspended immigration from those jurisdictions. It took days to confirm that dual citizens with Canadian passports were exempt, even if they were from one of the seven named countries. U.S. courts stepped in after that.

The new administration’s trade and border security plans are not the only topics that could affect Canada’s trucking industry.

A list of the Obama administration’s top issues — including climate change — was quickly stripped from the White House website and replaced with a list that includes an America-First Energy Plan to eliminate “harmful and unnecessary policies” like the Climate Action Plan. That Climate Action Plan committed to reducing Greenhouse Gas (GHG) emissions. The first phase of GHG-related emissions standards affected 2014-18 Model Year trucks. The second phase is scheduled to roll out from 2021-27.

The new limits have been projected to save US $170 billion in fuel over the lifetime of affected vehicles, thanks to fuel efficiency which would improve 23-25%, but the equipment would still come at a higher upfront cost. And Canada has traditionally adopted U.S. emission rules.

Trump’s energy policies could affect Canada in other ways, too. He is moving forward with plans for the Keystone pipeline that would deliver Canadian oil southward. Gene Orlick, chairman of the Canadian Trucking Alliance, is betting on that to boost the economy in Alberta, where his fleet is based. It can take two or three years for petroleum producers to ramp up, he said. That means more freight along the way. Even for his fleet. Orlicks may specialize in food and beverage shipments, but the available volumes dropped when close to 100,000 people lost their jobs because of low oil values. “We don’t ship to Fort McMurray and Grand Prairie like we used to,” he said, referring to the oil-producing region.

But where will the loads of future truck parts come from? There is no avoiding the fact that truck components are currently made around the world. Will the supply chain shift?

“There are going to be decisions made by the Trump administration which are going to affect not only Meritor but the whole industry. We’re going to have to react,” says Brett Penzkofer, Meritor’s vice president – North American aftermarket. “We don’t know what that will be yet, or what it will mean relative to changes in trade, tariffs, or restrictions.” As a global company, Meritor sources supplies in many countries, but it also relies on many domestic sources, he notes. “We’re well-positioned to be able to react to any [business] model or change that comes.”

Mexico is the “wild card”, he says, referring to the country that has frequently been a target of Trump’s scorn. “Especially since a lot of the truck and trailer manufacturers continue to move toward that footprint, or previously had been moving to that footprint.”

Meanwhile, Jonathan Starks, Chief Operating Officer of FTR Associates, questions whether the proposed 20% surcharge on Mexican goods will become a reality. “It’s just a proposal. There’s no indication of how it will be processed, who would be paying or where it would be collected. There’s a huge range of things that we can’t foresee,” the analyst said. Even Trump’s administration has begun to reference lower potential tariffs.

“Country of origin changes all the time, and what we do today we didn’t do five or 10 years ago, and it’s going to change in the future,” said David Danforth, general manager and vice president – PACCAR Parts, when answering questions in an Aftermarket Week education session. “If you’re predominantly in a certain country, you’re probably not going to get the best value or the best product in the segment.”

Of course, value is measured by more than purchase price alone.

“If all things given were equal,” adds Mike Eppes, managing vice president – parts for Rush Enterprises, “domestic is an easier sell.”