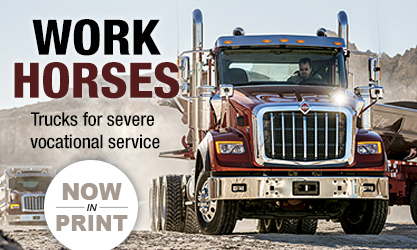 Drivers of severe-service vocational trucks will likely look back on 2016 as a year that made their jobs much easier. It wasn’t a banner year for growth in many industry segments, but truck makers still managed to produce some attention-grabbing upgrades to existing product lines. This year saw the introduction of a new -lightweight 11-liter engine for the -vocational side that offers a very nice power-to-weight ratio with ratings ideal for the market. And we even got a couple of brand new models to cheer about: the MBT 40 off-road severe-service chassis from Western Star and Navistar’s HX line.

Introduced in February, the HX series will replace the PayStar lineup as of January 2017. The HX is the first new truck introduced by Navistar since 2010. PayStar production will end this month.

The WorkStar series will live on, giving the lighter side of the market a host of options and configurations. The HX is the top-of-the line chassis for the heavy side of the business, seemingly custom-designed for Canadian service.

“Just under 50% of the orders from the first round of HX production went to Canada,” Semler said. “Pent-up demand for this extreme-duty platform was very high and our Canadian dealers were really excited about the truck. It’s proving to be very popular in Canada.”

In May, Western Star disrupted the severe off-road market, introducing its Extreme Duty (XD) Off-road package and the new the MBT-40 Transformer lineup, both built on the 6900 Model chassis. The Multi-Body Transformer can quickly change from one fully functional in-cab controlled body application to another, like switching from a water tank to a dump body.

The Western Star product launched at a time when the market was reeling from the collapse in oil prices, and a glut of underutilized equipment was being sold off at auction. Still, Western Star reports a few new developments to the product since May, including a new hydraulic control system that adds even more plug-and-play options for a variety of applications, and an 85-metric-ton configuration that uses a new Link suspension. There’s
also a lighter version in the works, the MBT 25, that offers the same quick-change -flexibility in a smaller package. That truck will make its first appearance at the spring construction shows in Las Vegas.

“These trucks will revolutionize the market,” said John Tomlinson, Western Star’s XD and vocational sales manager. “It used to be a two-week process to swap out a body, and in Western Canada, where you don’t use water trucks in the winter, a truck can sit for three to four months. We can make that switch in less than 30 minutes, keeping that asset working year-round with a fraction of the transition cost and downtime.”

Freightliner’s 122SD model, like its big Western Star brother, has felt the impact of the downturn in oil and construction markets, but the evolution continues. JP Davis, market segment manager for Freightliner Trucks, says they have recently added a 23,000-pound steer axle option for tractor is in the heavy-haul environment.

“Canada is a large part of the market for this truck, and we’re anxiously waiting for the oil field and construction markets to get back on their feet,” Davis said.

Kenworth recently expanded its T880 lineup, adding a set-forward axle option. The T880S makes available front axle ratings from 14,600 to 22,800 pounds. Single, tandem, or tridem drive axles and a variety of factory-installed lift axles are among a range of options available.

The T880 and T880S come standard with the recently uprated 12.9-liter Paccar MX-13 engine, which now cranks out up to 510 horsepower and 1,850 lb-ft of torque. For weight-sensitive applications, the 10.8-liter PACCAR MX-11 engine, introduced last fall and put into production early this year, is 400 pounds lighter than the MX-13. The MX-11 offers up to 430 horsepower and 1,550 lb-ft of torque and is well suited for many on- and off-road applications such as ready-mix trucks.

“This load spring option is intended to help adjust for vehicle lean conditions that may be induced by a side-to-side weight bias from certain bodies and mounted equipment, such as those used in refuse, concrete mixer, and well driller applications,” said Charles Cook, marketing -manager for vocational products.

And, new to a market segment we -seldom cover here, is Peterbilt’s Model 520, a Low-Cab-Forward dual-control chassis for refuse collection and concrete pumper applications.

“The Model 520 features two nearly identical work environments so drivers can seamlessly and safely operate from the left- or right-hand side, including dual controls for the parking brakes, HVAC system and stereo,” said Cook.

New offerings from Mack this year include the latest version of the 11-litre MP 7 engine with the updated wave piston design and a common-rail fuel injection system to reduce emissions and improve efficiency. It’s also about 50 pounds lighter than the previous version. Mack also rolled out the uprated mDrive HD 14-speed Automated Manual Transmission with two crawler gears that will really help folks that pour concrete curbs and sidewalks.

“The integration with the Mack mDrive HD 14-speed allows for seamless communication among components so that the vehicle is always in the right gear without the driver having to manually shift, reducing driver fatigue and increasing safety. It also provides a deep ratio of 32:1 in the lowest creep gear to facilitate low-speed functionality such a curb pouring when needed,” said Tim Winkle, Mack construction product manager.

“Vocational trucks, particularly these severe service models, are interesting and challenging to work on,” said John Felder, product marketing manager at Volvo. “The Canadian market is completely different from Edmonton to Quebec City. Every time we build something special and send it out into the field, particularly when we have a good partnership with the body builder and the owner, it’s like sending one of your kids off to school for the first time.”