NASHVILLE, TN – International has launched a new 12.4-liter engine, known as the A26, drawing on an engineering project that became known internally as Project Alpha – as well as selected European components. 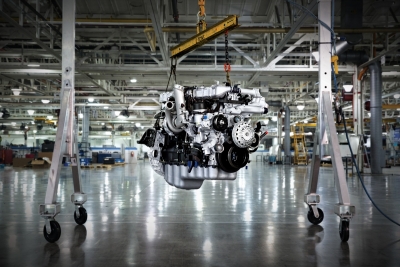 It will not be the last European influence to be found in International trucks. Volkswagen, which also has an ownership interest in MAN, is taking a 16.6% stake in Navistar, and there are plans to bring a Volkswagen powertrain to North America as early as 2019.

Of course there is still plenty of North American content in the A26, and not just subtle design changes like the different wrist pin on the piston.

The A6 has boosted fuel economy 5% over its predecessor, says Darren Gosbee, vice president – advanced engineering.

When mated to the recently unveiled LT series truck, the 2018 Model Year will offer a 9% bump in fuel economy compared to Model Year 2015.  In three test runs on a 764-kilometer route it achieved 8 miles per gallon (29.4 liters per 100 kilometers), Gosbee said. “This did not include the use of predictive cruise or neutral coast.”

Some of the improved fuel economy comes through reduced weights. The 2,229-pound A26 is 55 pounds lighter than the N13 it replaces, and is 700 pounds lighter than a 15-liter engine, but it also helps to shed another 200 pounds of extra weight in vehicle-mounted components, International says.

Several upgraded materials have been introduced. Valve covers are made of a composite material, and the flywheel housing is made of shot-peened aluminum, both helping to save weight. The Compacted Graphite Iron crankcase is also said to be stronger than traditional gray iron. Meanwhile, the compressor wheel is now made of titanium, and is part of a simplified single-stage design.

Fuel economy is further enhanced with a new Variable Geometry Turbocharger, while fuel is injected through a 36,300-psi high-pressure common rail fuel system. New cylinder head coolant passages are also 50% less restrictive than the ones they replace, reducing parasitic losses to the water pump.

Piston pins have been enlarged, and connecting rods and bushings have been optimized. Smaller piston cooling jets have also been introduced to increase oil pressure and improve lubrication, and an oil cooler thermostat bypass lets oil bypass the oil cooler in cold weather.

International will offer oil drain intervals of up to 70,000 miles (112,000 kilometers) for fleets that are achieving more than 6.5 miles per gallon (36 liters per 100 kilometers). Diesel Particulate Filters will also last 600,000 miles (about 950,000 kilometers) or 11,000 hours, which essentially eliminates the requirement for the first owners of the engines, Gosbee added.

He also refers to the A26 as the “quietest engine in our stable”. That involves several improvements. For example, a rubber gasket designed for the sculpted crankcase isolates the oil pan to absorb vibration and reduce harshness. There’s also a six-blade fan with specially designed gear teeth that have been further calibrated to reduce engine noise.

International continues to stress the importance of “uptime” in all of its product launches and business targets. In the last year, dwell times in shops were slashed 50%, and half of all repairs are now turned around in one day, Kozek said. The engine’s over-the-air programming and remote engine calibrations will help to further improve the shop times. “Those trucks do not visit the dealership,” he said.

Other durability-related features include a stainless steel, laser-welded, single-stage Exhaust Gas Recirculation cooler, and the high-pressure common rail Bosch fuel pump has been tested for six years and been used on the 15-liter MAN D38 since 2015. Loads are distributed with a larger piston pin, connecting rod and bushing. The single variable-geometry turbocharger also features a titanium compressor wheel, promised to offer superior fatigue life.

The engine is promised to have a B10 design life of 1.9 million kilometers, describing the point when just 10% of units will fail, and it comes with a two-year warranty with unlimited miles.

“It’s a great time to be at International. We’ve been through a lot,” Kozek said, alluding in part to past challenges with the company’s emissions strategy. “We’re coming out of it.”

International has submitted the A26 for approval under EPA 17 emissions standards, and is scheduled to enter production in April. The N13 engine, still used in severe service and vocational trucks, is being produced until the end of this year, Gosbee says.