PEORIA, Ill. — Ray LaHood considers the new Windsor to Detroit bridge so important he is looking to arrange financing for a portion of the project.

LaHood, the first secretary of transportation appointed by US president Barack Obama has left political life and is now a consultant to various businesses, including Caterpillar Inc. It was that relationship with the construction equipment and truck manufacturer that brought LaHood to the company’s Peoria Proving Grounds to speak to the media during a press briefing to introduce journalists to Caterpillar’s newest truck, the CT681.

After a speech emphasizing the need to fund infrastructure building and repair, and stressing the need for politicians in Washington to work together on a national level to develop and support a transportation strategy, reporters had the opportunity to pose some questions to him. Truck News took the opportunity to ask him his thoughts about the state of the bridges and border crossings between Canada and the US and the fact that the US government didn’t contribute to the financing of the New International Trade Crossing. In addressing the question, LaHood summarized the situation for the audience. 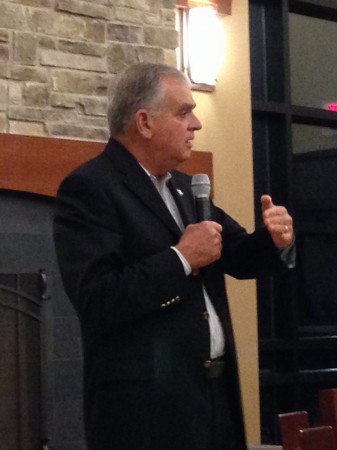 “We worked as much as we could at DOT [Department of Transport] to make that happen. Canadians deserve all the credit. I’m working right now to see if we can find some money to build the Customs facility that is needed. That project will put a lot of people to work from Detroit and from Canada and it will be a great bridge to continue the friendship, but our country needs to do a lot more.”

When asked about the state of the rest of the crossings, he emphasized the nature of the relationship, but quickly turned to the border that most often preoccupies American minds.

“I think between Canada and the United States we have such a great friendship with them, the relationship is very good obviously the relationship with our friends down south in Mexico where the border is very porous has become so political, so it very difficult to know how it is all going to turn out.”

International crossings, however, weren’t LaHood’s main topic. As mentioned above, LaHood’s presentation emphasized the need to build and repair the aging and crumbling infrastructure in the US.

“Without infrastructure, America would not be the great country it is. America has a 236-year strong tradition of building, of turning our country into opportunities for people,” he said.

“The interstate system—there is no other system like it anywhere in the world. Our country is connected with the world, thanks to the vision of Dwight Eisenhower, thanks to the vision of a Republican president who believes when you connect the country—Eisenhower’s idea was maybe we needed these roadways in case there was some kind of an attack people could get out of the cities. What happened? Every time a roadway was built it created an economic corridor. What happened when we built the interstate system? Thousands of our friends and neighbours went to work. We need that kind of vision in Washington today. We don’t have it.”

LaHood, it should be noted is a Republican, even though he worked for a Democratic administration. He explained that politicians who are more beholden to their parties and who refuse to co-operate across the aisle thereby preventing anything from getting done is part of the problem. So is a relatively new attitude held by certain elected officials. 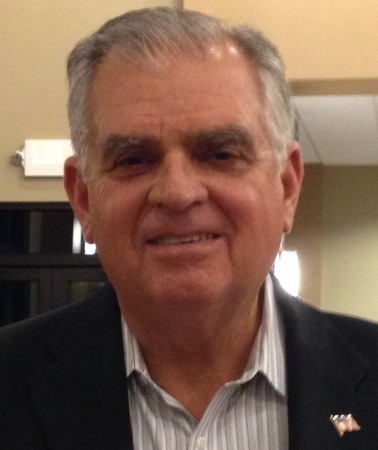 “You’ve got people now who are running for Congress that don’t believe in government. Their idea is get elected, go to Congress, and vote no on everything and try to stop progress, i.e. last year’s government shutdown. What did that accomplish? Nothing. Embarrassment. You need to elect people who want to make progress, who want to get America back to being number one in infrastructure. We used to be number one in infrastructure. We’re number 16 now.

“Any of you been to China? What’s going on in China? Every time you go there, you see a new road, a new high speed rail line. The same is true all over Asia and all over the world, but particularly in countries making huge investments. When you invest in infrastructure, you can attract businesses to come to your community. No business is going to look at a community that doesn’t have good roads, good water and good sewers. Right now when it comes to our roads, when it comes to infrastructure, when it comes to investment in our community, we’re not doing very well. We have always done better.”

More than once LaHood referred to the country as a giant pothole and he repeatedly reference the list of 3,000 bridges needing to be repaired or replaced. In order finance the ongoing cost of infrastructure maintenance he said more money needs to be found, and he knows exactly where to get it.

“The Highway Trust Fund is what built the interstate system it’s what built magnificent bridges and infrastructures and transit systems all over America. And it’s been diminished by people driving less and driving more fuel-efficient cars. The Highway Trust Fund—the gas tax—has not been raised since 1993. Now you can’t think of another salary or tax that hasn’t been raised. This is the lifeblood of infrastructure in America. I’ve heard people talking about vehicle miles travelled and tolling and public private partnerships. That’s all good. But what we need in America is a big pot of money—the same big pot of money that built America. That’s what we need today,” said LaHood.

“I say raise the gas tax 10 cents per gallon. If you want to do it over two or three years, you can do that, but the most important thing it so to index it—index it to the cost of living. If the 1993 gas tax increase had been indexed, we’d have a big pot or money. So raise the gas tax, do 10 cents per gallon. It’s not near enough. But it sends a message America is going to get back into the infrastructure business. America is going to put people back to work. Think of the certainty that would give contractors, to governments, to state DOTs, to companies like Caterpillar that need to sell the equipment that builds the roads and builds the bridges.”