VANCOUVER, BC – Stephen Laskowski will lead the Canadian Trucking Alliance (CTA) as president and Chief Executive Officer when David Bradley retires from the positions in January 2018.

Laskowski, who was recently named Bradley’s successor at the Ontario Trucking Association, is currently CTA’s senior vice president and second in command. 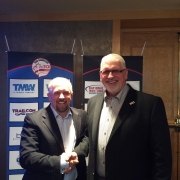 Bradley has held the leading staff position since the national alliance was first formed. While the CTA once had a separate office in Ottawa, operations are now based in the Ontario Trucking Association office in Etobicoke, Ontario, where employees and other resources are shared.

“We are excited,” said CTA chairman Gene Orlick. “Steve has been groomed for the job and he is the ideal person to lead CTA into the future and maintain the outstanding level of service to the industry which CTA is known for.”

Bradley had openly championed the 22-year association employee to fill the top staff job, but Laskowski’s appointment was hardly automatic. Four of the alliance’s seven provincial associations initially pushed for a national search, suggesting that their national voice had become too Ontario-centric.

Orlick believed it was better to follow Bradley’s succession plan and turn to the most qualified person in front of them. “I came from a frugal environment. Every penny we save is what we’re earning,” he told Today’s Trucking, referring to what could have been a costly national search. He also refers to the economies of scale that are realized when the CTA can share employees and office space with the Ontario Trucking Association.

It was the approach that ultimately won the day.

Orlick offered similar thoughts when calling for the alliance to unite during opening remarks at the Vancouver meeting. All seven associations are stronger when “pushing the machine” in the same direction, he says.

Of course, it hardly means an end to any disagreements. “CTA is unique in that it is an alliance. It’s a partnership of seven separate associations that make up one,” Laskowski said. “You are potentially going to start certain conversations from different perspectives.”

Now it’s on to the business of lobbying. Immediate items on the agenda include a move toward mandated Electronic Logging Devices, the second phase of regulations to reduce Greenhouse Gases, and weights and dimensions. “You have a number of labor issues as this federal government is far more active on the labor file,” he adds.

“I feel we got the right guy – his knowledge, his experience, his contacts, his passion,” Orlick says, reflecting on the board’s decision. “I’ve never seen it before in anyone else who serves our industry.”

The search for a new senior vice president at CTA now begins.