FERGUS, ON — Shawn Nelson sees a direct link between snow-laden trailer roofs and safety, and he’s on a mission to create – even mandate – a network of snow removal equipment to address the problem. 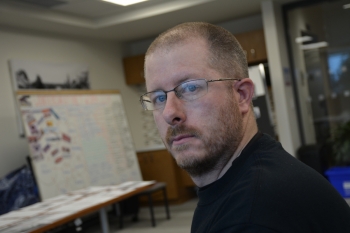 There is no question that the debris represents a flying threat. Layers of snow and ice on a 53-foot van trailer can weigh one to 10 tonnes, raining debris on the road below, he says. News footage culled from dash cams regularly show how dangerous that situation can be.

“Sometimes it’s not the initial impact of ice and snow. It’s the reaction,” he says of the risk. Crash through a windshield or not, the debris can force motorists to swerve into the path of other dangers.

One of his first steps was to establish www.wintersafetynetwork.com for those who want to list where snow removal systems are available to any trucks, not just the businesses that own them. He represents the TrucBrush system, although the idea is to list any of the nine brands he’s found that scrape, brush or blow the frozen debris from trailer roofs.

It doesn’t end there. In his one-man campaign to have the snow clearing required by law — completed for a set price, and paid by shippers — he set up an open meeting in Fergus, Ontario to discuss the plan.

The former truck and coach mechanic is undeniably earnest. Emails on the concept come with the scream of capital letters. “Everything with me is safety,” he says. His presentation from the podium wanders from snow removal to wheel losses and tolls. The network is not just for trucks, he says, but cars as well. The dozen people who came to the meeting included a handful of fleet representatives, those behind different snow removal systems, and two Kitchener police officers. He billed it as nothing less than the North American Winter Snow and Ice Safety Meeting. Prime Minister Trudeau was on the list of those who were invited.

Rules that require the clearing of trailer rooftops do exist, noted Dave Bloxsidge of Polar Snow Equipment, referring to laws in Pennsylvania. “Wherever that trailer sits overnight is responsible for the roof of that trailer,” he said. But there are grey areas in those rules, too. Travel plazas and truck stops don’t have to install the equipment. “It has to go on the shipper-receivers and the buildings where they sit.”

But there are still limits to the snow-clearing systems that are available, adds Dennis Shantz, director of fleet services for Home Hardware’s private fleet. “Snow I don’t find is the big factor. It’s the ice,” he says. “We have to get up there.” The fleet facility in St. Jacobs, Ontario includes a catwalk that allows teams to climb up to the roof and pound away at that ice with rubber mallets. No matter what system is available, he adds, what happens when equipment is parked somewhere other than a yard? Who would be responsible for ice that drops by a truck as it’s traveling somewhere to be cleared?

Then there’s the question of who will make the investments.

“Transportation is a commodity. It’s absolutely going to the cheapest guys on the road,” stressed Mark Irwin of Winix Developments, which offers the SnowEdge system. “It is the distribution centers that need to take on the responsibility. Certainly there’s an opportunity for them to charge back the service.”

He was less enthusiastic about a regulated system. “Trucking companies in particular,” he said, “they pay quite a lot to conform to regulations.”

Then there is the inevitable question of liability. Who exactly would be willing to allow trucks from other businesses to drive in and use the equipment?

Large distribution centers make the investment, but the equipment doesn’t tend to be installed in smaller locations with a handful of service bays, Bloxsidge added.

Nelson wondered about the opportunity to install the equipment at roadside inspection stations, but even he admitted that drivers would need to be able to access the tools without worrying about the threat of a ticket for overweight load or another issue.

Meanwhile, there is a price to be paid for those who fail to clear the snow and ice from trailer roofs. It’s not considered an insecure load, but it would likely lead to a charge for operating an unsafe vehicle, said Waterloo Regional Police Constable Byron Harding. While shippers might be held liable for damages, roadside charges are on drivers or carriers. The battle between them is left to the courts. “Someone’s going to sue somebody and somebody is going to be liable,” he said.

“The change has to be from everyone. Drivers have to speak up. Carriers have to start listening. Carriers and receivers are going to have to do their part,” Bloxsidge says.

“Why wasn’t this in place years ago?” Nelson asked. The array of unanswered questions raised during the meeting may have answered that.