BANFF, AB – Mexico has clearly realized the benefits of the North American Free Trade Agreement. The southernmost member of the trading block is now Canada’s third-largest trading partner, behind only the U.S. and China. 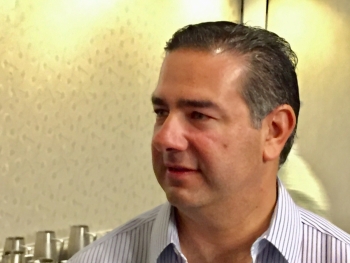 It has clearly played a role in the Canadian economy, too. Trade between Mexico and Canada has been increasing about 11% per year, he told fleet executives in a presentation to the Alberta Motor Transport Association. Mexico is now our second-largest supplier of fresh food, and sixth-largest supplier of seeds. But automotive manufacturers are clearly the dominant player in northbound exports.

Mexico is now Canada’s second-largest supplier of auto parts. And exports of goods-moving vehicles – otherwise known as trucks – have grown about 45.3% per year. The country is now the sixth-largest producer of heavy vehicles in the world. Brands including Kenworth, Freightliner, Hino, Volvo, Isuzu, Scania, Dana, Cummins and International all have a manufacturing presence there.

It’s somewhat ironic that many of the plants build trucks to meet emissions rules that don’t apply in Mexico itself. Equipment in that country still has to comply with EPA 04 emissions standards. Canacar has opposed steps to raise them to EPA10 or EPA13 standards because Ultra Low-Sulfur Diesel and Diesel Exhaust Fluid are simply not available, Montemayor Morineau explains. Even if the regulations changed, updating the fleet would take time. A typical truck in Mexico is 17 years old.

It isn’t the only way the country’s trucking industry can be a world apart from the one familiar to most Canadians.

Hours of service are typically set by fleets themselves. Even if the officially sanctioned on-duty driving time was increased from eight to 10 hours per day, it takes 14 hours to drive from the border crossing of Nuevo Laredo to Mexico City, Montemayor Morineau said. Secure rest areas are few and far between.  “How can you expect us to comply with your driving time if we don’t have the infrastructure for our drivers to rest?”

Then there’s the matter of the border. It can take six to eight hours for a truck to cross the border these days, even requiring a specialized industry sector to do it. These transfer services now have about 25,000 trucks shuttling freight within 20 kilometers of the international crossings. Most of the work is performed by aging tractors, as well as Mexican drivers who earn more than their counterparts because they carry visas to cross the border.

That has led to recruiting challenges elsewhere in the industry. “We have a lack of quality and professional drivers,” Montemayor Morineau says of Mexico’s broader driver shortage.

Now there’s the question of how a new U.S. administration might change screening requirements or affect freight flows overall.

“They say they want to change NAFTA, but they don’t say what they want to change,” Montemayor Morineau told his Alberta peers. Canacar itself continues to wait for news of what will change. “What is really going to happen in the future? I really don’t know about NAFTA.”

While steps have been taken to streamline cross-border shipments, there have been limits. Mexico has built on the Customs-Trade Partnership Against Terrorism (CTPAT) with the NEEC-OEA program, but its focus is to ensure carriers have paid their taxes, he said. “We’re not against checking. We’re not against not bringing contamination in the United States.” But the country’s trucking industry is still looking for ways to reduce the wait times. In the near term, though, the transfer services will likely remain a fact of life.

Trucking will also continue to play a dominant role in any cross-border trade in the near future. Mazda may have invested in railway access for its plant, but most of the products roll on wheels. “The railroad, the planes and the ships are not our competitors. They are part of our chain of logistics,” he says. “The last mile will always be in a trucking company.”

For now, the country remains a manufacturing hub for some of the most recognizable brands in the world. Automobiles account for 8.1% of Mexico’s exports, and vehicle parts represent 5.7% Computers (5.2%), televisions (4.2%) and cell phones (3.9%) round out the top five. And look no further than the location of these plants for proof of the market they’re built for.