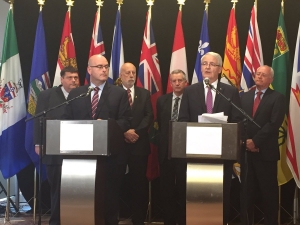 TORONTO, ON – Canada’s transportation ministers met in Toronto today, discussing a broad array of initiatives such as the mandating of Electronic Logging Devices and the need to study truck-mounted systems like side guards that could better protect “vulnerable” road users.

The ministers have also agreed to create a task force to harmonize truck-related regulations “wherever possible”, said Federal Transport Minister Marc Garneau. Unspecified changes to the Memorandum of Understanding that governs weights and dimensions were also agreed to in principle.

Following a call from the Federation of Canadian Municipalities, Transport Canada is establishing a committee to study measures such as side guards, cameras and other devices that could help to protect pedestrians and cyclists around trucks.

“This task force is going to look at the problem itself, [and] whether there is sufficient evidence to show that we need to put in place specific measures,” he said.

Garneau added that Canada is also considering a “similar approach” to the pending U.S. mandate for Electronic Logging Devices.

“The position of the federal government is that we want to move toward Electronic Logging Devices. We plan to put something forward in 2017 on that subject,” he said.

Climate change, distracted and drug-impaired driving, and automated vehicles were also on the agenda.

“As the transportation system evolves and adapts, we need to better anticipate and prepare for the changes to come,” said Garneau. “A long-term agenda for transportation in Canada will position the system to support economic growth, create jobs, promote a healthier environment, and strengthen Canada’s middle class and competitiveness in global markets.”