LOUISVILLE, KY – Peterbilt produced 36,000 trucks in 2016, marking its fourth-highest production year on record. But it wants more in 2017. Specifically, the target is more market share.

The manufacturer branded with a red oval is looking to secure 15% of heavy duty sales this year, says Kyle Quinn, who was named Peterbilt’s general manager in January. That would be up from 13.4% in 2016. It would admittedly be a significant gain, but the company has already recorded 16% market shares in January and February. 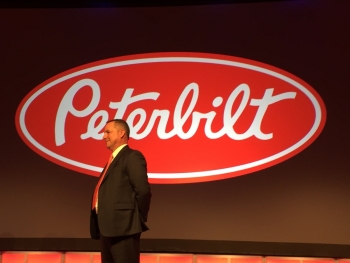 Peterbilt projects the market for heavy-duty trucks to reach somewhere between 190,000 and 220,000 vehicles in North America, about where it was last year.

“As the energy sector improves, we see the return of those energy vocational trucks,” Quinn said, responding to a question from Today’s Trucking. Vocational truck sales are growing in other sectors as well.

Fleet orders would make a bigger difference in the targets than in past years, since they now account for 37% of Peterbilt sales compared to 23% in 2014. That reflects a shift toward larger fleets in the broader marketplace, Quinn added. He believes the promise of tax relief could spur customer buying decisions, too.

Recent product launches and upgrades will all have a role to play in any growth. On top of enhancing the fuel-efficient 579 EPIQ, recent launches have included a new 40,000-pound drive axle and Model 520 Low Cab Forward Truck. The proprietary MX engine family has also been upgraded to meet stricter Greenhouse Gas emissions standards with the help of enhancements to turbos, coolant water pumps, and air management in cylinders.

There’s added support to consider as well. Peterbilt added 25 new dealer locations in 2016 – the third year it has seen that kind of growth – and now has 352 stores. Some of that growth has been realized through partnerships with independent dealer groups.

The dealers, meanwhile, will be able to enhance their service management capabilities through this year’s large-scale rollout of the SmartLinq system. The underlying telematics capabilities now connect about 27,000 trucks.

Peterbilt’s Red Oval Certified program for used trucks was also relaunched in 2016, and features a 150-point inspection and one year/200,000-kilometer warranty.

The company is looking well beyond 2017, however. Scott Newhouse, Peterbilt’s chief engineer, refers to the second phase of the U.S. Department of Energy’s SuperTruck Program. The first phase of that led to several enhancements now seen in the Model 579 Epiq, he said. And Peterbilt expects to exceed the goal of boosting the freight-ton efficiency of the next truck by 125%.

“We’ll come out when it’s ready,” Newhouse said. “But I think it will be here sooner than you think.”