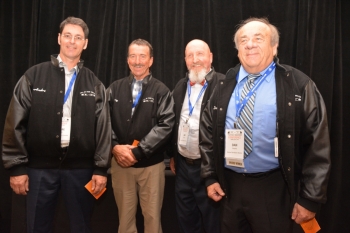 NIAGARA FALLS, ON – The Private Motor Truck Council of Canada (PMTC) honored fleets, drivers and retirees alike on Thursday, in a series of awards handed out during the first day of its annual conference.

Four drivers were inducted into the organization’s Hall of Fame for Professional Drivers, supported by CPC Logistics Canada. Andre Goyette of Cardinal Health Canada has covered more than 3 million kilometers of accident-free driving in his career, and never received a moving violation. Gerald Cormier of Superior Propane has logged 72,000 truck hours in his 36 years on the job.

Home Hardware Stores had two drivers named to the hall. James Wigood has worked for the company for 36.5 years and amassed more than 6.5-million kilometers of accident-free driving in the last 30 years. On one occasion, he helped care for the injured after a drunk driver hit another motorist. Dan Bezpaly has four decades with the company, and in the last 37 years as an accident-free driver has covered 7.5 million kilometers.

The organization also handed out the second President’s Award in its history to Richard Lalonde, formerly of Air Liquide and Praxair Canada. During his time with the council he represented the group with the Quebec Ministry of Transport and on a Transportation of Dangerous Goods advisory council, as a director, and chairman from 2006 to 2008.

“This is only a few of his accomplishments and can’t begin to explain the importance this individual had in the betterment of the PMTC and our industry as a whole,” said Mike Millian, president.

Three fleets were recognized when the Private Motor Truck Council of Canada and Aviva Canada handed out hardware for annual Private Fleet Safety Awards. John Deere Canada ULC was the top mid-sized fleet, with fewer than 75 power units, and Home Hardware Stores was honored as a large fleet with more than 75 power units. Superior Propane was the most-improved fleet.

The John Deere operation runs about 10.8 million kilometers per year, distributing agricultural parts in Canada and the U.S. It’s a five-time winner of the honor, and has embraced several practices including two days of in-house training for new hires. It also has a Commercial Vehicle Operator Record (CVOR) violation rate of just 5.48%.

Home Hardware is a seven-time winner, and was recognized for practices such as employee screening, orientation and safety meetings. Drivers also benefit through a safe driving program and profit sharing bonus. Its CVOR violation rate is 14.6%.

Superior, meanwhile, has reduced its CVOR violation rate from 39.8% in 2015 to 18% today. Its best practices include things like orientation and training captured in a Driver Passport system, comprehensive accident investigations, and safety awards for drivers.

The PMTC and its Young Leaders Group handed out two education bursaries, paying for two of the four courses need to complete the PMTC Logistics Management Graduate Program. Recipients included Andre Parent of Superior Propane, and Edwin Chestnut of Sleeman Breweries. Both happen to be based in Guelph, Ontario operations.