NIAGARA FALLS, ON – Private fleets have much in common, but there are some distinct differences between those that operate in Canada or the U.S., according to new benchmarking research conducted for the Private Motor Truck Council of Canada (PMTC). 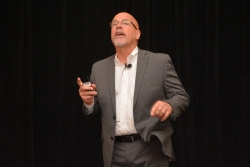 The Top 3 issues identified by Canada’s private fleets were equipment and maintenance, customer service, and drivers, said Tom Moore, senior vice president of the National Private Truck Council – the U.S. group that conducted the research. Issues like those are universal.

It’s likely why 2/3 of the Canadian private fleets said they track on-time delivery and customer comments. But the definition of “on time” can vary depending on customer requirements. While most (54%) tracked deliveries within 30-minute windows, 18% drilled down to 15-minute increments, and another 18% considered 60-minute time windows, he said.

Some of the differences between Canada and the U.S. appear to involve the way private fleets approach equipment. Two-thirds of Canadian equipment is leased, compared to 50% leased by members of the National Private Truck Council. Among the surveyed PMTC fleets, half leased their power units, and full-service leases were the model adopted for 71% of the lease agreements.

As for the iron that is parked, Canada’s private fleets reported 5.91 breakdowns per 100,000 miles, compared to the 2.84 reported in the U.S. “The Number 1 cause of breakdowns is emissions. Far and away,” Moore said.

Business models differ in other ways, too.

Canada’s private fleets handle about 50% of their mother company’s freight, compared to the 2/3 of the freight handled by U.S. private fleets, Moore said. Of the Canadian freight, 69% went to retail locations, 20% to distribution centers, and 11% to inter-plant locations. In contrast, the fleets handled just 1/5 of inbound movements.

U.S. fleets are also more likely to deploy back office technology than their Canadian counterparts, at 95% compared to 64%. But that is expected change in the near future. “This is where we were in the U.S. about five years ago,” Moore said.

While 82% of the Canadian operations don’t solicit backhaul freight, that presents opportunities “so long as it doesn’t detract from your primary customer service,” Moore added.

Still, some of the biggest issues of all relate to those who sit in the driver’s seat. “We’re not in the trucking business. We’re in the people business,” he explained. Among the surveyed Canadian private fleets, 95% preferred company drivers to leased personnel. About 17% of their personnel are almost exclusively unionized, while 41% are non-unionized operations.

The typical private fleet driver in Canada is three years younger than those in the U.S., too. But there are still challenges. “These drivers are getting older. Where are we turning to get new drivers?” Moore asked.

Private fleets enjoy some recruiting advantages over for-hire counterparts, though. About 85% reported that drivers are home every night. The drivers were found to enjoy “decent” benefits, and Canadians enjoy better pension programs than those who work for private fleets in the U.S. Incentive programs like safety benefits tend to be worth 3.3% of driver wages compared to 5% in the U.S., too.

Among those private fleet drivers who do leave, 55% go to another driving job, and 31% leave to other jobs altogether. The rest were lost to retirements (39%) or disciplinary reasons (26%).

The typical Canadian recruiter then sets their sights on a minimum age of 23, with 2.5 years of experience. Their average new hire is 35.7 years old.

Sixty-five percent of the fleets hire for-hire drivers, but 58% pull from other private fleets. “You’re stealing from each other,” he said. “Surprise, surprise.” But 41% are also hiring internal candidates, and 12% have found candidates in the military.

Still, to meet the needs of the future, the industry has to prepare to pay more, Moore said.

“We’re going to have to invest more and more in our driver compensation to keep these drivers happy,” he said, referring to a maximum wage of $80,000 per year. “The typical driver is going to be like a free agent in baseball, football and basketball.”