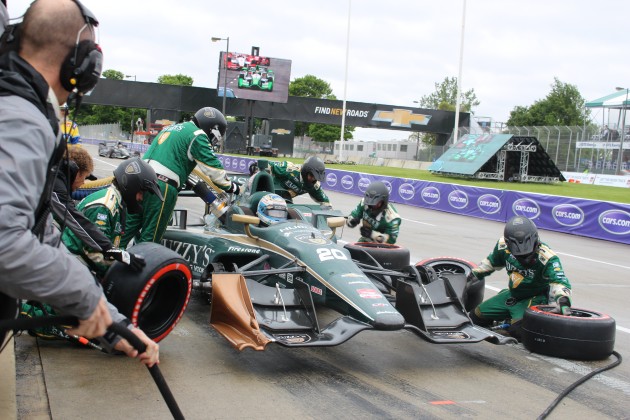 Luca Filippi and his pit crew prepare for the race

The BBQ was a success and toasted Luca Filippi, a professional race car driver.

According to Cettina Sciberras, sales coordinator at Reefer Sales, the idea to host a BBQ in honour of Filippi was thanks IMPCO, the manufacturer of APU units.

“IMPCO, the manufacturer of our APU comfort pro unit, sponsored Luca Filippi – he’s a racer for the Honda Indy event that happened this past weekend. So we had a social BBQ to celebrate.”

The BBQ didn’t just serve up food to its guests, but also the chance to see Filippi in action, as Reefer raffled off tickets to the Indy on Sunday June 14.

Sciberras said the turnout to the BBQ was a good one since nearly everyone who was invited to the event showed up.

“We had a lot of guests show up,” she said. “In total, I think we had between 150-200 people show up to the BBQ. A lot of them were APU customers as well as owner/operators and leasing companies.”

The afternoon also featured a racing simulator where guests could race again Filippi or against each other.

If you missed the BBQ this year, Sciberras says not to worry as Reefer expects this event to be an annual one.

“We will do it each year, always the week before the Indy,” she said.

Filippi came in second place on his race on Sunday June 14.