“Next year is going to be an exciting year for us,” says Jeff Peterson, marketing manager – Americas. The company plans as many as six product launches in 2017, and that follows a year of four major introductions including the P89 Series air disc brakes.

The new CBX40 AeroBeam sliding tandem axle air suspension for 53-foot van trailers weighs in at 1,267 pounds, which is 85 pounds lighter than the CBX40 that went before it. Company officials say it’s also 27 pounds lighter than competitive offerings, and the weight even compares to spring-based systems.

The chance to shed weight is particularly important in the context of pending Greenhouse Gas limits and new components needed to boost fuel economy. “There is an additional 400-500 pounds of equipment that will burden the trailer,” explains Roger Jansen, product manager – trailer axles and suspensions, referring to 2021 fuel-efficiency targets. Underskirts alone can weigh 250 pounds.

Trailer running gear, however, tends to account for about 20% of a trailer’s overall weight. That opens the door to opportunities. “It’s a very customizable portion of the trailer,” he said. “We’re going to contribute our part to offset that weight.”

The CBX40 AeroBeam also includes upgrades in the name of strength. Its 80-ksi steel subframe includes four full-height cross-members, and 5.75-inch-by-9-millimeter friction-welded axles that are said to be 12% thicker than competing models to minimize deflection. There are also 16 reinforcements to help resist damage from situations like curb strikes, repositioned sliders, and dragged trailers. “There’s a significant amount of stress and a significant amount of load that goes into a trailer suspension,” he said.

“We added stiffness in there to reduce any deflection that might come out of the axle,” Jansen added. “Everything is sculpted down to a science now.”

The center cavity has certainly been streamlined. Relocated shock absorbers offer more room on the subframe for air tanks, brake valves, tire inflation equipment, and ABS modules. And the relocated components leave more room for a cooling supply of air that can otherwise be sacrificed when using side skirts.

Collectively, the changes have boosted the warranty on the structural beam and axle to a full 10 years, with another seven years of warranty for the slider box, alignment, and trailing arm bushings. Air springs and shock absorbers are protected for two years. “It’s not just a paper warranty,” he adds. “We’ve done our due diligence on it.”

The new system draws on other proven enhancements as well.

Black Armour coating, introduced more than a decade ago on Holland landing gear, protects against corrosion, with the company promising that it protects as well as hot dip galvanized coatings without the related weight or cost. “It’s impervious to water penetration,” Jansen says, noting how that chips in traditional coatings can allow water to make its way underneath, creating blisters and causing rust creep.

Maintenance is enhanced with a SwingAlign system, first introduced in 2004, allowing alignments to be set by a single person in minutes, using nothing more than an impact wrench. The connection between the trailing arm and frame does not have to be touched. (“The cost of tires aren’t coming down anytime soon,” Jansen says, referring to the importance of alignments.)

It can all be further customized with manual or air-assisted slide pin releases, dockwalk systems, auto load-sensing axles, disc or drum brakes, and spindle configurations. The Auto Lift and Deploy Solution, integrated with the Meritor/WABCO InfoLink system, will be available as well, offering the promise of a 1% boost in fuel economy.

Versions for other applications are expected to be unveiled as early as next year. 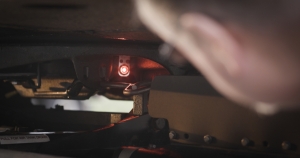 Meanwhile, a new ELI-te fifth wheel coupling assistant uses high-intensity LEDs to show drivers if there are sound connections between tractors and trailers.

Available on FW35 fifth wheels, the system shines a series of four white lights around the king pin to show everything is seated in place. If there’s a problem, a flashing red light appears on each side of the fifth wheel.

“The amount of light that’s under a fifth wheel is actually pretty inconsistent,” says Bryan Redeker, product manager – fifth wheels, referring to the challenge of today’s inspections. “If you can’t see the locks, you’re not going to be confident in the connection.”

“A miscouple can be an expensive incident,” he adds, referring to equipment and cargo damage. The yard surface can be damaged, too. “A dropped trailer isn’t making you any money. It’s costing you money.”

It is not the first time that SAF-Holland has looked to use technology to address the issue. The first generation of the Electronic Lock Indicator was introduced in 2000, but warnings were integrated through the dash. Few of those were sold. “Our first ELI was really before its time,” admits Mark Molitor, vice president of product engineering – Americas. The biggest market for that was in Mexico.

But the ELI-te, says Redeker, “puts it where drivers are supposed to be looking.” 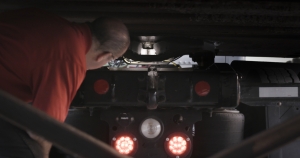 The latest design is self-contained, drawing on a single connector for a supply of 12-volt power. The steel-enclosed Electronic Control Module is mounted on the fifth wheel’s deck plate. “It’s not a very pleasant environment, so we’ve made sure that wiring harness can withstand that,” he adds. The system as a whole is covered by a two-year warranty.

One sensor detects the kingpin, while another watches the yoke that keeps the lock itself from spreading open.

It could also open the opportunity for other products to come. “This is a foundational product for future development,” Redeker says. “There are more things that are coming in the future.” As for what those things might be, “it will be dependent on what our customers want from us.”

“There’s a lot of discussion in the industry about telematics and where that’s going,” says Jeff Talaga, vice president – sales and strategic development – Americas. “You’ll see more products coming from us next year that have sensor capabilities.”

“Innovate, adapt, or you’re going to fade to the side,” added Bill Hicks, director of product planning – Americas.