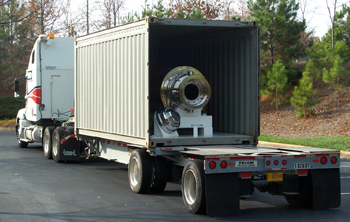 FORT ERIE, ON — The first few hundred gallons of highly radioactive liquid nuclear waste will begin its journey along Ontario highways later this month, in the wake of a U.S. court decision that allows the material to cross the Peace Bridge into the U.S.

About 6,000 US gallons of the material, officially known as Highly Enriched Uranyl Nitrate Liquid (HEUNL), were initially to be transported last year from nuclear research facilities in Chalk River, Ontario. However, a federal lawsuit filed last August by American-based non-profit Beyond Nuclear and six other U.S. environmental groups stalled the shipments over concerns raised about potential public health, safety, and environmental hazards.

Kevin Kamps, radioactive waste watchdog and member of Beyond Nuclear, says the decision to move ahead with the transport of this radioactive material is a deep disappointment.

The move has been years in the making.

In 2010, then Prime Minister Stephen Harper and U.S. President Barrack Obama agreed to have spent Highly Enriched Uranium (HEU) repatriated back to the U.S. for processing. The goal was to have all of that returned to the U.S. by the end of 2018.

The process of shipping the spent uranium to the U.S. originates from a program spanning back to the 1950s, when American-produced HUE was imported into Canada for medical isotope research at facilities such as Canadian Nuclear Laboratories and Chalk River Laboratories, where the National Research Universal reactor is based.

The Canadian Nuclear Safety Commission (CNSC) works with Transport Canada to oversee the transportation of solid and liquid nuclear materials.

In 2015, CNSC approved NAC International’s design for a package that would be used to contain the liquid waste during its 500-plus-kilometer journey.

Aurèle Gervais, chief advisor with CNSC, says the safety of the shipment relies on the design of the transport package or casks, which must meet the Regulations for the Safe Transport of Radioactive Material, published by the International Atomic Energy Agency.

The casks that contain the liquid waste come in the form of large metal cylinders that are loaded onto trailers, and Gervais says they must be certified by both the CNSC and the U.S. Nuclear Regulatory Commission before being used.

In addition to companies like Canadian Nuclear Laboratories having to apply for transport licenses from the CNSC to ship the waste, transport security plans have to be supplied as well.

“This plan would address the security measures that have to be in place to ensure a safe and secure transport,” says Gervais.