The Nova Scotia Trucking Safety Association (NSTSA) presented Smith with the award at its annual general meeting and award luncheon on April 28, 2016.

The Steve Bennett Memorial Safety Award for the Professional Driver of the Year was named after Steve Bennett, a member of the NSTSA board of directors who passed away in 2002. Drivers recognized by the award are nominated because of their outstanding safety protocols, experience on the road, impeccable driving record, other awards they’ve received in years’ past, community activities and their dedication to driver education. 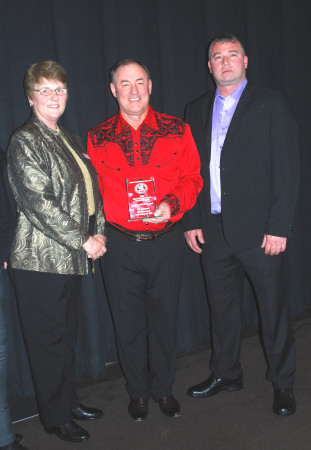 Smith, the 2016 award recipient, who has been driving for more than 45 years, is a decorated truck driver who has a number of awards under his belt, including the 2006 Highway Star of the Year Award and the Truckload Carriers Association’s 2013 Owner/Operator of the Year Award. As well, just this year, Smith hit five million accident-free miles, an accomplishment both him and SLH are proud of.

To Smith, the Steve Bennett award is special because of how close it is to home for him.

“Of course, I’m very excited to win the award,” Smith said after receiving the news. “When you enter these things, you don’t expect to win, you just take a chance and you have to understand there are a lot of people applying. But I’m very excited (for this award) because it’s a local event…and it’s not very often people get recognition for what they do at work, so this is a nice thank you for my many years of driving.”

SLH executives said they were overwhelmed with the recognition Terry received on behalf of the NSTSA, adding that the award doesn’t surprise them because of Terry’s reputation for being an ambassador both on and off the highway.

“It’s a very proud moment for SLH, although when it comes to Terry, we’re not surprised by the recognition,” said SLH’s vice-president, Brent Fowler. “Terry’s an ambassador, not only for SLH, but for the industry. Both him and his wife Roxanne live and breathe trucking and are very focused on giving back.”

“Terry is a professional driver that we would hope that other drivers coming in can emulate exactly what he’s all about,” Cross said. “That pride of accident-free driving is something that Terry values but at the same token, that safety is number one with us at SLH. We are very proud of Terry and he should be very proud of himself.”

Smith said his commitment to safety is just another part of his job that he takes pride in.

“There’s a lot to the word safety,” he said. “You have to work with a company that’s safety-conscious. That’s where it all starts. A lot of people say they are a safe company but they’re not. SLH is a company that lets me operate safely by giving me enough time to do my work.”

One of Smith’s main goals going forward is to educate others about the trucking industry and how it is filled with professionals.

“When I started out in trucking, we were the heroes of the highway,” he said. “But someplace along the line, that got lost. My goal in life is to help other people and restore that image of the truck driver. And you can only do that one driver at a time.”

Smith and his wife Roxanne are largely involved in a number of community initiatives and charities, including the Truck Convoy for Special Olympics Nova Scotia.

Smith has been with SLH for six years and is based out of its Halifax, Nova Scotia terminal.