September 4, 2019
WINNIPEG, Man. -- Manitoba’s 2019 Driver of the Year, Big Freight's Robert Pigeau, draws on a military background and a commitment to serve his community. 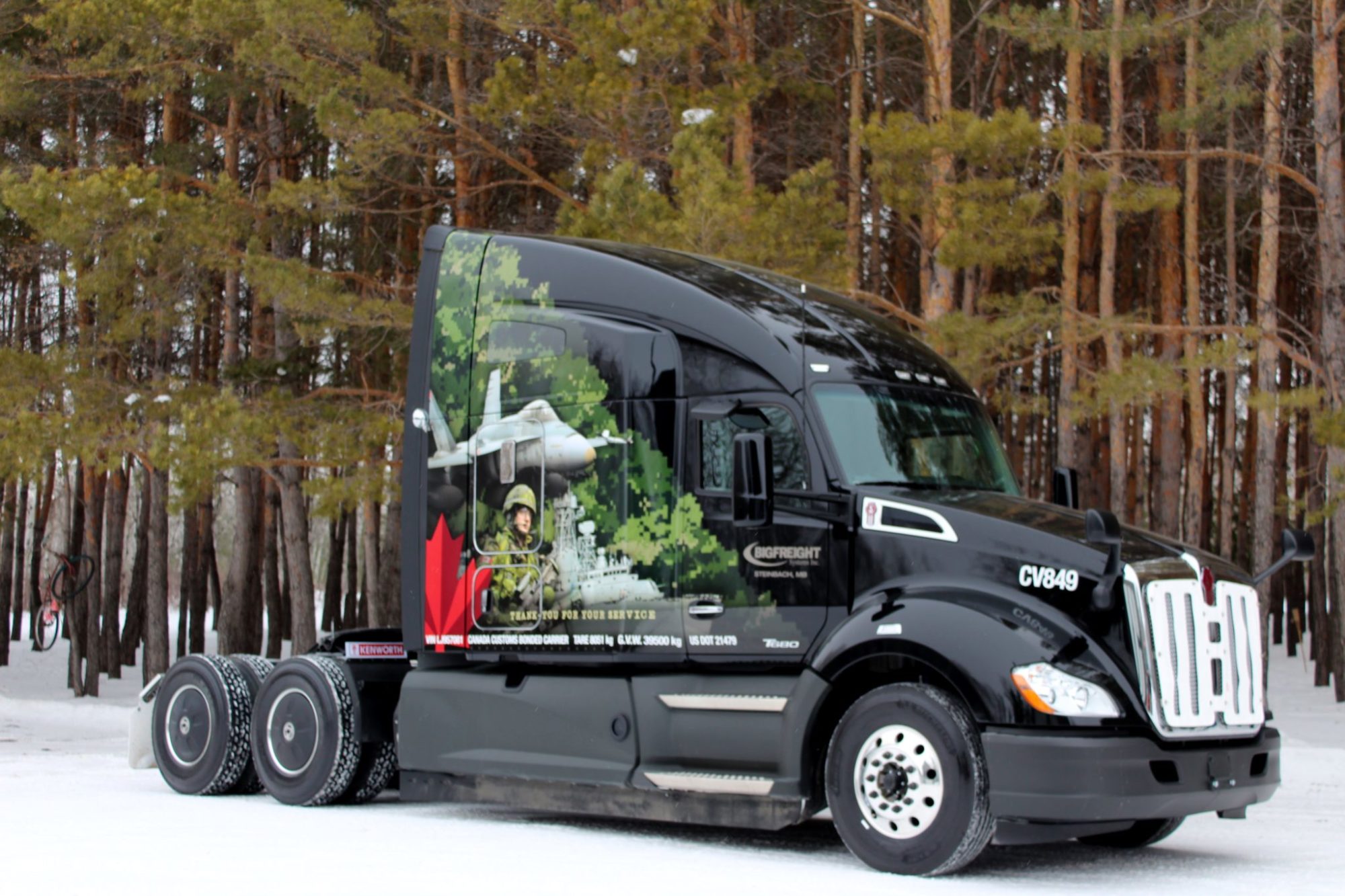 WINNIPEG, Man. – Every driver has a story about how they got into the trucking industry, and for Manitoba’s 2019 Driver of the Year, the how is just the beginning of what has been quite a journey.

Robert Pigeau comes from a military background, having served for more than 21 years as a chef. Driving a truck and hauling a kitchen trailer was part of his job, much like a modern-day food truck chef catering to the hungry masses.

During his time in the Canadian Armed Forces, Pigeau was posted all over the country and abroad, including a stint in Bosnia and Croatia. His jacket weighted down by the medals he has received over the years, Pigeau eventually retired from the military and found a home in the trucking industry.

“When I retired, I didn’t want to be stuck in a building,” said Pigeau. “I decided I wanted to go out on the road.”

On that road, Pigeau has made his mark, not just as a driver, but as someone who puts community ahead of himself – a trait engrained within those who choose to serve their country.

In 1996, Pigeau launched his trucking career by first going through Reimer Express Lines’ driving school, which the carrier provided during that time.

With an overall score of 98.6 – second only to one other student, who also entered the course with driving experience – Pigeau was ready to make his new career a reality.

Military training can be tough, and for those looking to attain their 404 driver’s licence it’s no different. Active servicemen must complete a series of defensive driving courses and a week-long class to acquire their air brake endorsement.

“The training in the military is pretty intense,” said Pigeau. “When I started pulling a 53-foot trailer it was actually easier than pulling my kitchen trailer…especially backing up.”

A year later, Pigeau started driving for Big Freight Systems out of Winnipeg, Man., where he has remained to this day.

Driving longhaul, Pigeau covers all of North America for Big Freight, from the Northwest Territories to south of the border, moving everything from dangerous goods to Harley Davidson motorcycles. 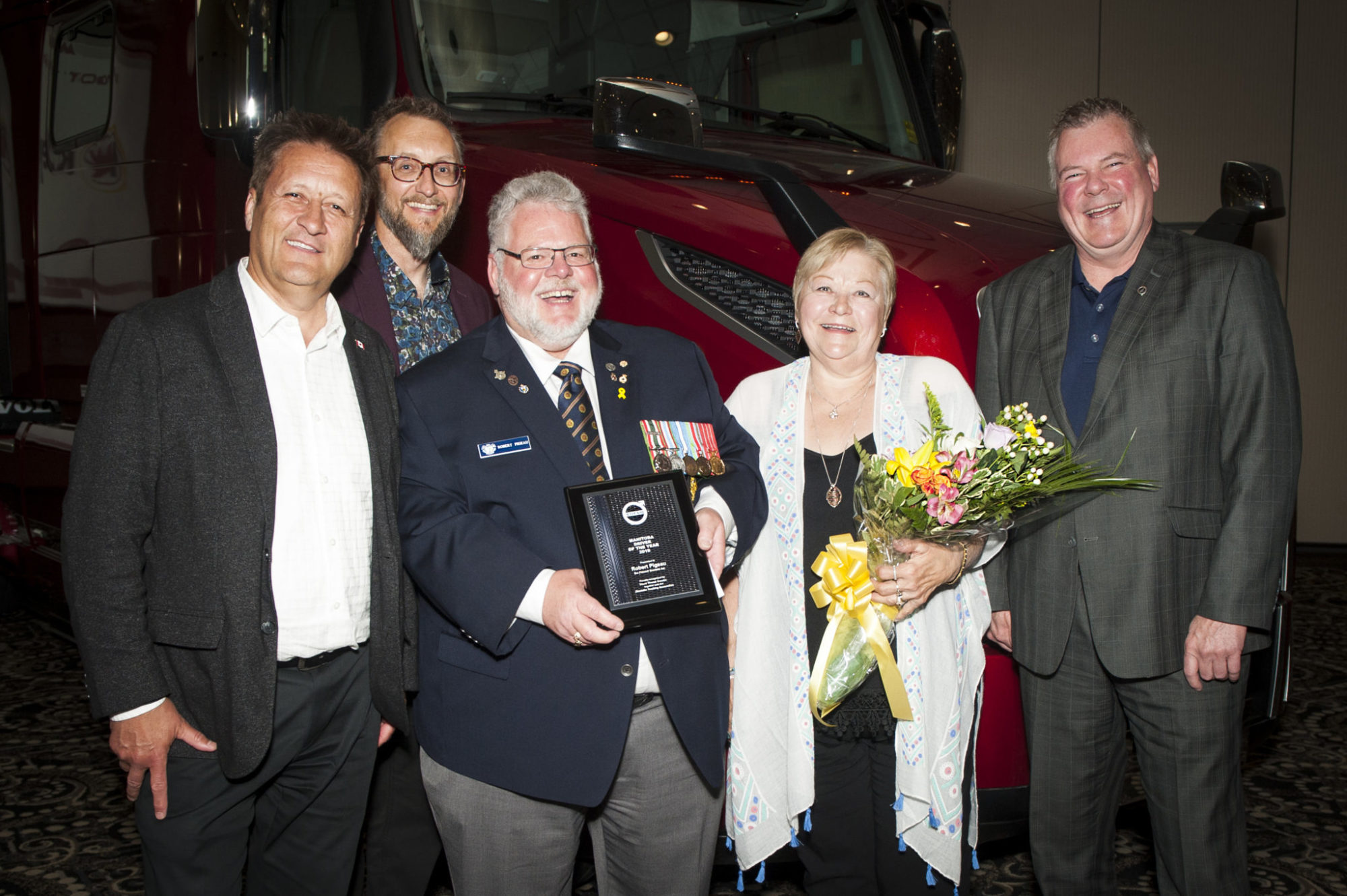 Robert Pigeau has been honored with the 2019 MTA-Volvo Trucks Canada Manitoba Driver of the Year.

To say his second career as a truck driver has been a success would be an understatement. Pigeau was honored with this year’s Manitoba Trucking Association (MTA)-Volvo Trucks Canada Manitoba Driver of the Year, and was one of 10 MTA Inland/Custom Trucks Sales Kenworth Truck Company Industry Excellence Award recipients in 2018.

With a strong sense of company loyalty, he has remained with Big Freight for over 20 years, tallying several million accident free miles during that time.

Rob Cooper, operations manager for Big Freight, said Pigeau takes enormous pride in what he does, and always shows meticulous attention to detail in his work.

Company president and CEO Gary Coleman agreed, saying “Robert is proud to be a professional truck driver and represents our company and our industry extremely well.”

But career satisfaction is not the main driver in Pigeau’s life.

Having turned 60 this past March, Pigeau, along with his wife, continue to be pillars in their community, volunteering any way they can to help those in need.

Whether it be for the MS Society of Canada, the Truck Convoy for Special Olympics, or the Ride for Dad for prostate cancer, the couple continue to be an example of what it means to give back to the city of Winnipeg and beyond. Pigeau even went so far to say he is eyeing retirement so that his time can be freed up to volunteer more often.

Big Freight has been in Pigeau’s corner when it comes to raising awareness of Canada’s veterans, a cause near and dear to his heart.

“I was going to Big Freight for many years to try and get something to recognize all veterans,” Pigeau said, whose company truck boasts a military wrap to honor those who have served. “Every veteran who works for Big Freight has the yellow ribbon with the maple leaf (on their truck).”

Pigeau helps Big Freight by being a trustworthy contact for veterans looking to get into the trucking industry. He created a Facebook page called “Life as a Canadian Veteran Over the Road Driving Truck,” and several former and active military personnel have taken notice.

Coleman and Cooper say they have never seen a person prouder of their country and honored they had the chance to serve than their 2019 Driver of the Year.

And Pigeau’s sense of pride is not limited to his past life a military serviceman. He has carried that dedication and loyalty to his current employer, something that is not as common in the industry as many would like and not lost on anyone at Big Freight.

“Robert is an incredible ambassador for our industry and our company,” said Jeremy Messner, vice-president of business development for Big Freight. “It is always a pleasure to get some time with Robert at our company events, which he seldom misses. His energy, passion, and laugh are contagious and inspiring.”

Hopefully, Pigeau’s energy and passion will passed down to a new crop of drivers in an industry that needs them desperately.