DUBLIN, VA – Volvo Trucks has set an ambitious target for itself – to be nothing less than “Number 1” in the world. 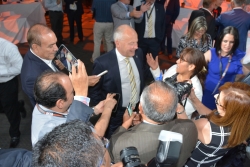 “It doesn’t necessarily mean we want to be the biggest,” said Volvo Trucks president Claes Nilsson, during the launch of the company’s new VNL long-haul tractor. “We want our customers to make more money and be more successful.”

That said, Volvo is clearly on a growth curve. Globally it now has 2,000 dealers and shops – 420 of which are in North America – and sells models in more than 190 countries.

“Our dealers truly believe in the future,” adds Goran Nyberg, president of Volvo Trucks North America. About US$600 million has been invested in the manufacturer’s North American dealer network since 2010, adding 65 new locations and increasing service bay activities by 51%.

It’s come a long way since first trying to import trucks to North America in 1958, and the real foothold that came in 1981 when it acquired the assets of White Motor Company.

But as global as the business of truck manufacturing has become, market dynamics from one region to the next clearly involve more than preferences between cabovers and conventional trucks.

North American truck sales have been lagging, but appear to be recovering. Volvo projects a market of 215,000 Class 8 trucks this year. And the orders of its recently launched VNR regional tractor have already matched the total 2016 sales volume for the VNM model being replaced.

“We believe the market has bottomed out,” Nilsson says, noting that new truck inventories have normalized. Long-haul trucks account for 42% of U.S. truck sales but are expected to return to 45%. In Canada, the share remains at 44%.

“Manufacturing is rebounding, and we believe the second half of 2017 will be strong, and also the truckload carriers will come back stronger,” Nyberg says. U.S. housing starts are also reaching record levels, and Volvo expects that to continue into 2019.

In Europe, meanwhile, the truck market remains strong. There, Volvo has secured a 17% market share and accounts for more than 400,000 trucks on the road.

It’s a different story in Latin America. The truck market in Brazil has dropped to a mere 30,000 trucks a year, about one-third of where it was two years ago. In China, e-commerce is driving the growth.

But it all plays a role in reaching the ambitious target.