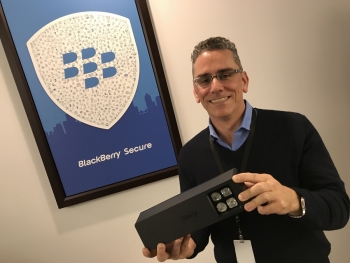 TORONTO, ON — When the leader of the free world embraces your product, you know you have a winner. So it was with BlackBerry — then known as Research in Motion — when it could boast dedicated smartphone users like U.S. President Barack Obama, who once said in an interview, “They’re going to pry it out of my hands.”

They did pry it out of his hands, though. Millions of other users abandoned the device’s QWERTY keyboards as well, once competitors like Apple’s iPhone and different touch-screened alternatives hit the market.

So much for the addictive draw of device that some people had begun to call the “CrackBerry”.

It would be a mistake to discount the company. BlackBerry has gradually been rebuilding itself under the leadership of Chief Executive Officer John S. Chen, in no small part because of products focusing on the trucking industry and broader automotive sector. The growth hardly matches the surge during fiscal 1999-2001, when assets expanded eightfold, but the Kitchener, Ontario-based company has recently been beating analyst estimates.

Today’s BlackBerry focuses mainly on software and the Internet of Things, largely shifting away from hardware … to a point. At the 2016 Mid-America Trucking Show it unveiled a brick-like trailer tracking and monitoring device known as Radar, which has since secured users such as Caravan Transport Group, Trailer Wizards, and Titanium Transportation. Midway into 2017, RBC Capital Markets reported the business had equipped about 4,000 trailers overall. Fleet Complete has signed on to sell Radar as well.

In addition to incorporating an accelerometer and gyroscope to track motion, Radar-M units scatter infrared light inside a trailer, measuring the percentage of available space. This can introduce new opportunities to broker freight, which will likely become more important against a backdrop of mandatory Electronic Logging Devices, says Philip Poulidis, senior vice president – BlackBerry Radar. “A dispatcher can fill you up on route. There’s a lot of revenue-maximizing opportunities.”

A stripped-down version known as Radar-L — for flatbeds, chassis, containers, heavy machinery, and other non-powered assets — tracks equipment locations, motion, and opening or closing doors. Using the company’s antenna-tuning technology known as Paratek, the device can even be mounted under the trailer chassis or between frame rails, rather than requiring a clear view of the sky.

This all draws on several areas of BlackBerry expertise. Each unit relies on cellular connectivity, multiple sensors, and approaches that extend battery life. Cell towers are also combined with GPS signals to enhance locating functions. Data is collected in five-minute increments when a trailer is moving, and sent to a server every 15 minutes. But it’s transferred just once a day when equipment is parked.

“When you look at all these elements, it sounds like a mobile phone without the screen,” Poulidis says. “We had all those pieces.”

Ted Daniel, Titanium’s president, was attracted by several features in Radar M. Unlike hardwired tracking and monitoring devices, the fleet found that a single-piece unit can be installed on a barn door in 15 to 20 minutes. (BlackBerry reports it’s closer to 10 minutes.) One fleet employee installed about 1,000 of the devices in just two months.

“Now you can load this up with everything you need – temperature, humidity, door open, door close,” Daniel says, referring to the various things that are tracked.

Fairfax Financial’s backing also makes BlackBerry a stable supplier, as does the shift away from commoditized smart phones, he adds. “They’re now a software and support company. There’s no margins in hardware anymore.”

Daniel has a particular interest in tech, in no small part because of a computer science degree and a resume that included two years at IBM Global Services in the late 1990s, when that tech business was transforming itself. Sure, his primary focus was finding technology that would serve the fleet’s needs, but knowing BlackBerry is a Canadian business was a bonus. “I’m a little patriotic, too,” he says.

BlackBerry’s past struggles have actually helped to open doors in sales calls, Poulidis insists. “A lot of people know who BlackBerry is, and a lot of people have had nothing but positive experience with their BlackBerries, and it invokes this nostalgic feeling.”

BlackBerry also stresses the sense of security it wants to convey. Company devices are described not only as secure, but “BlackBerry secure”. Security protocols begin with rotating “keys” embedded in chips themselves. Even if a key is compromised, it becomes useless moments later after being changed.

BlackBerry’s famed security is opening doors of another sort. Its QNX operating system, for example, is already playing a role in over-the-air engine updates, although Poulidis won’t reveal which Original Equipment Manufacturers are using it.

Last year the business also announced plans for the BlackBerry Autonomous Vehicle Innovation Center (AVIC), which will support the software for autonomous vehicles.

Then there are the partnerships. This July, BlackBerry and Qualcomm Technologies formed a deal to develop automotive platforms for connected vehicles. They’ll use Qualcomm Snapdragon modems to optimize BlackBerry’s over-the-air software and Secure Credential Management Services.

The company is also working with Denso on automotive displays, to roll out in 2019.

There’s more to come, and a commitment to release at least one new product a year. Poulidis refers to applications like variable-usage-based insurance, which could use geofences to track when trailers are in high-risk areas, or whether equipment is moving or parked. Digital freight brokers are gaining ground, too, he said. “[This] is going to be the year of supply chain visibility.”

Like any other tech player, BlackBerry still faces stiff competition, and the telematics space is no different. Omnitracs, Spireon, and Trimble are among those looking for a share of the same business. Verizon, a U.S. telecom giant, paid US $2.4 billion for the Fleetmatics Group GPS tracking business. And in the infotainment space, competitors include the likes of Microsoft, Android, and Linuk.

But BlackBerry knows how the top of the tech heap can be reorganized.