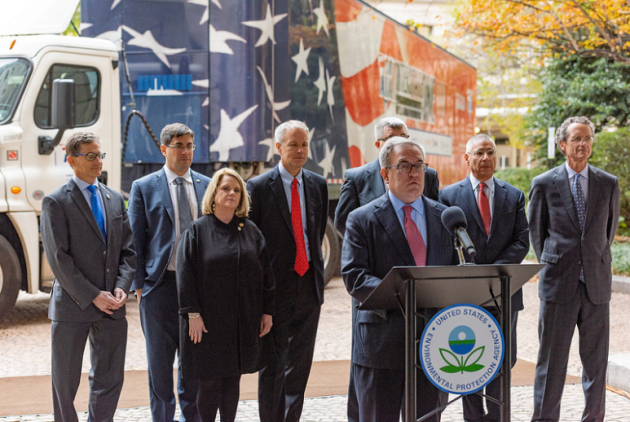 Known as the Cleaner Truck Initiative, a proposed rule is to be published in early 2020. The EPA says it will also simplify the certification of heavy-duty trucks and engines.

“Areas of deregulatory focus will include onboard diagnostic requirements, cost-effective means of reassuring real world compliance by using modern and advanced technologies, the deterioration factor testing process, and concerns regarding annual recertification of engine families,” the EPA noted in a release.

“The U.S. has made major reductions in NOx emissions, but it’s been nearly 20 years since EPA updated these standards,” said acting EPA administrator Andrew Wheeler. “Through rulemaking and a comprehensive review of existing requirements, we will capitalize on these gains and incentivize new technologies to ensure our heavy-duty trucks are clean and remain a competitive method of transportation.”

Canadian vehicle emission standards have traditionally mirrored those in the U.S.

“As an industry engaged in interstate commerce, ATA strongly favors a single national emission pathway as opposed to a patchwork of state standards,” said American Trucking Associations (ATA) vice-president Bill Sullivan. “Clean air and a healthy environment are important to all of us and the trucking industry has repeatedly demonstrated that it can work proactively and in partnership with the federal government in achieving these aims.  We look forward to working with the EPA in developing a standard that achieves nationwide air quality improvements across the country while maintaining a strong and robust economy.”

“Our members continue to increase fuel efficiency and lower greenhouse gas
emissions in line with standards that will continue to challenge us through the next decade. EMA members are ready to build upon these successes to achieve even greater reductions,” said association president Jed Mandel.