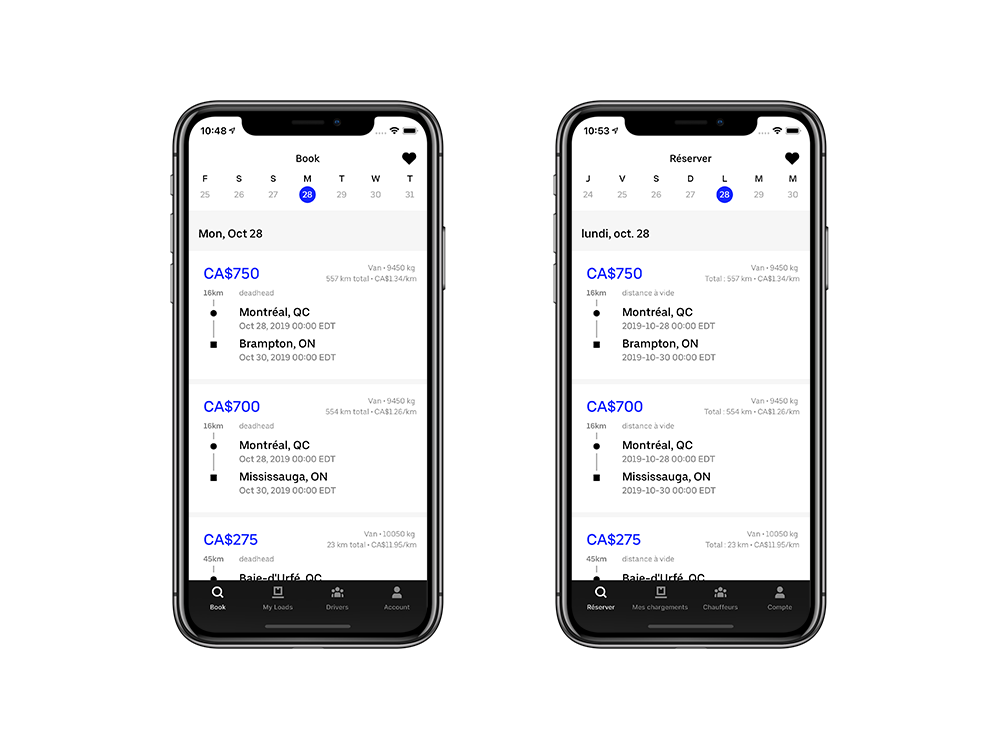 It turns out that it was only a matter of time. On Oct. 14, the service supported a food shipment from Mississauga, Ont. to Montreal, including a backhaul and day move in between.

Montreal-based Transport DSquare moved the first load with Uber Freight a week before the official launch, and everything went off without a hitch, according to Transport DSquare’s director Corey Darbyson.

“We’d be talking to Uber Freight since last year and we really wanted to be the first to move a load in Canada,” he said. “Uber gives us access to clients that we otherwise couldn’t get. Now we can compete with the larger carriers on service, and that’s a game-changer.”

That’s music to the ears of Bill Driegert, Uber Freight’s head of operations.

“Part of our mission is to make the market more sustainable for small carriers and drivers, and the way we do that is by making freight more accessible.”

As for its European detour, Driegert explained that going there first allowed Uber Freight to solve challenges around currency, regulations and language.

“Going to Europe first for us was about unlocking a region. We knew if we built the technology that would work in Europe in multiple languages and currencies and with different types of addresses, that we would have a tech platform that we could then take to Canada.”

In addition to Transport DSquare, Uber Freight also announced that it has partnered with larger logistics firms, such as Martin-Brower, which delivers for McDonald’s and other restaurant brands.

“Martin Brower is always looking for new technologies that help us raise the bar of service for our restaurant partners,” said Kristofer Lorelli, director of freight at Martin Brower. “We’re excited to work with Uber Freight to tap reliable capacity and ensure seamless, fast service across North America.”

Driegert said the company’s early customer base in Canada is similar to its shippers in the U.S., with a focus on food and beverage and consumer packaged goods.

According to Driegert, since launching in the U.S. in 2017, shippers and carriers have seen the benefits of Uber Freight’s offerings. “From the carrier side, they have instant access to freight. They can hit a button and book a load. On the shipper side, they are getting instant prices and visibility to capacity, which allows them to make better decisions.”

The technology also differs from other load boards when it comes to getting paid, said Darbyson. “Uber is the one that pays us, and not only that, they pay us within five to seven days, which is unheard of. We used to 45 to 60 days.”

Whether there will be drivers lining up to receive that money may be in doubt, according to Purolator president and CEO John Ferguson, speaking recently at the opening of the company’s latest facility in Toronto.

“It’s early days, but the driver shortage is the most interesting facet to it, because it is already a precious commodity. Will they get drivers? Drivers want hours and consistency of work. Without that I think the supply side will be their issue.”

As for whether Purolator sees Uber Freight as a competitor, Ferguson says the company hasn’t had any discussions on the impact Uber may have on their northbound cross-border LTL business.

“We’re so integrated with our courier operation that our clients are very sticky with us, versus the general LTL business. Things such as our cross-border business make us less vulnerable to a pure LTL threat.”

The company did report that the freight division grew the network to more than 50,000 carriers and made reference to having some of the nation’s largest carriers as users of the app. On those earnings, however a loss of $81 million was reported for the quarter, $50 million worse on a year-over-year basis.