BLOOMINGTON, Ind. – After hitting a three-year low in May, FTR’s Trucking Conditions Index rose to the highest level recorded in 2015.

FTR said that though freight growth slowed during Q2, it is on track for the sixth straight year of annual gains. The firm added that drops in fuel costs, “continue to be a positive for everyone involved” though with labour costs increasing, there is still pressure for rising rates.

“If fuel prices jump during 2016, just as capacity is tightening, it could cause a significant acceleration in rates,” FTR said.

Jonathan Starks, FTR’s director of transportation analysis, commented: “It was a positive sign for trucking that the index rebounded in June. May was the lowest level in 3 years, but June was the best month so far in 2015. Continued declines in fuel prices during July and August should help to keep the index elevated as the industry prepares for the fall shipping season. The fall peak may not be as strong this year but the economy continues to chug along, and contract rates are still growing versus last year. The spot market has certainly slowed in 2015, relative to a very robust year in 2014. For the last week of July, the Market Demand Index (MDI) from Truckstop.com was down over 50% from 2014. Spot rates are also down, but not nearly as dramatically, and half of the decline stems solely from lower fuel prices. The truck market is quite stable at the moment and seems likely to maintain that pace until we get into 2016.”

Details of the June TCI are found in the August issue of FTR’s Trucking Update. 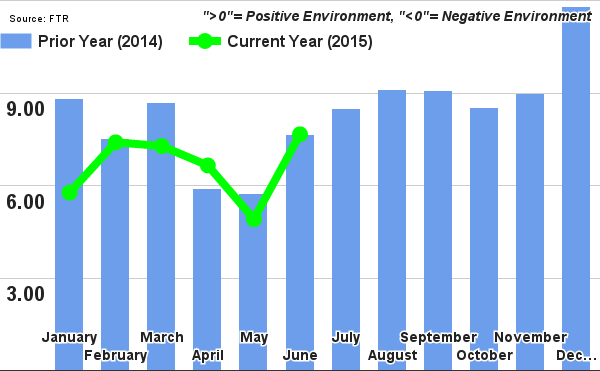