WINSTON-SALEM, NC – The market for Class 8 trucks continues to transform, with long haul units accounting for a shrinking share of sales, but Volvo Trucks North America is facing the shift head on with its new VNR regional tractors.

Promoted as the “shape of trucks to come”, the VNR was officially unveiled at the ExpoCam truck show in Montreal, and it is undeniably a radical upgrade when compared to the VNM platform that has been on the road since 1996. The latter model included its last significant upgrade in 2002, with features including new headlamps, interior, hood, and engines complying with emissions standards of the time.

Volvo’s share of the market for regional trucks in Canada has been on a slight decline, according to IHS Automotive. Looking at sales in the last 13 months, Volvo badged 9% of the regional tractors. That’s down from the 13.6% of the 7,444 units sold overall in 2014, and the 10.9% of the 4,861 units that were sold last year. Sales in the first quarters of 2016 and 2017 were relatively flat, representing a market share of about 10.7%.

But this is a new year, and Volvo has the new truck.

“With the new VNR models, we will take that [market share] back,” predicted a confident Magnus Koeck, vice president – marketing and brand management, referring to broader market share that was lost with the dip in long haul truck sales. “The new VNR model has been very, very well received,” he added, noting that orders for VNR 640 premium mid-roof sleeper have “far exceeded” expectations. The lineup also includes the VNR 300 daycab and VNR 400 flat-roof sleeper. 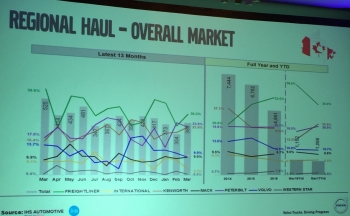 While the regional hauling business is relatively flat at 28% of Class 8 trucks sales in Canada and the U.S., regional tractor sales are expected to become increasingly important to manufacturers. Long haul trucks accounted for 46.8% of Class 8 sales in 2015, but just 41.2% in 2016.

The full effect of an expanding Panama Canal and upgraded U.S. ports has yet to be felt, Koeck added. “That will change transport patterns across the U.S.” Container and intermodal traffic is already increasing, and he also cites new Less-than-Truckload partnerships being established between Canada and the U.S.

In the meantime, construction-related trucks are representing a greater share of Class 8 trucks sold in Canada and the U.S. In the first quarter of 2016, those models with engines larger than 10 liters represented 12.9% of that market, while models with smaller displacements sat at 9%. Fast forward to the first quarter of this year, and construction trucks with engines larger than 10 liters represented 15.8% of the Class 8 sales, with smaller displacements at 11.3%.

The nature of trucks continues to change in other ways as well. Volvo power can now be found under the hood of 92.5% of trucks that roll off the assembly line. The company’s proprietary I-Shift transmission is found in 90.2%.

But one thing remains constant – the role of diesel as the fuel of choice, largely because of relatively low and stable prices.

“If natural gas was on everyone’s lips some years ago,” Koeck said, “it’s not anymore.” 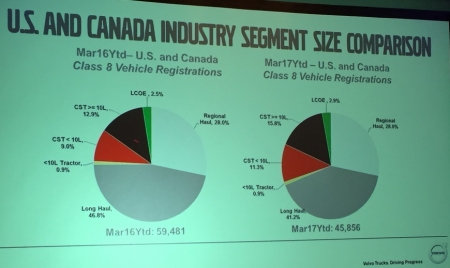