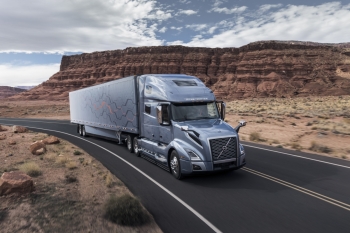 DUBLIN, VA – Volvo promised that its new regional VNR tractor was the “shape of trucks to come”, and it delivered on that promise on Tuesday with the reveal of its long-haul counterpart — the VNL.

“It’s so nice to see this truck without a cover on it,” quipped Jason Spence, product marketing manager, noting how prototypes had been moved around North America under the cover of darkness. “We’ve been hiding the truck from you for 10 months.”

Many design elements are clearly shared with the VNR, although other features are also specific to the needs of long hauls.

Engine air intakes have been redesigned and repositioned when compared to the previous VNL. A new hood, lower airflow deflector and roof air deflector and cab fairings guide air around the cab, while redesigned chassis fairings take care of the flow around the drive wheels. Down beneath a newly designed honeycomb grille is a three-piece bumper that has been moved forward about 1.5 inches, creating a 124-inch BBC.

Collectively, the aerodynamic upgrades boost fuel economy by about 1%.

“The headlamps are the most innovative headlamps in the trucking industry,” Spence adds. In addition to incorporating LEDs, a fan draws heat from the lamp in hot conditions, and reverses the air flow in the cold. That prevents fogging. Daytime Running Lights within the lamp also take the shape of an angled line.

Open the 3×4-foot doors and plenty is revealed inside. 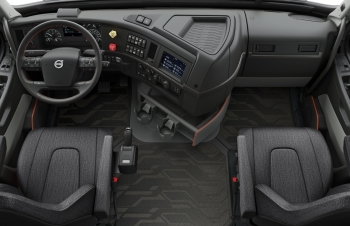 For those at the wheel, a new dashboard features a five-inch color display in the midst of the gauge cluster, where low-level warnings appear in yellow and emergency matters show up in red. And an optional infotainment system to be released in 2018 features a seven-inch color touchscreen that can deliver navigation support and the images from a back-up camera. A premium audio system that comes with it also features Bluetooth and Apple CarPlay.

The new leather-wrapped smart steering wheel essentially becomes the command center for many of the electronic functions — it has 21 buttons within thumbs’ reach — and sits atop the air-assisted Perfect Position, infinitely adjustable steering column. Even the face of the steering wheel itself can be tilted 20 degrees to find the best position for comfort and view of controls.

Seven seating options come from National or Sears Seating, and available features include heating and ventilation, or even a refrigerator under the passenger seat. A quick release will dump the air to ease entry and exits, and an integrated memory will bring everything back to the original position. Lighter riders will even be able to adjust the damping so they face fewer bumps on a ride.

Just above the doghouse are two adjustable cup holders that will secure just about any drink size short of a Big Gulp. And for drivers who like to store mobile electronics like cell phones on the top of the dash, integrated power outlets help to keep charge cords clear of other controls down below.

Back in the sleeper are cabinets that curve toward the bunk for easier access, as well as a reclining bunk that Volvo notes is a first for North America. (It had been offered in the European FH.) That can come with a pillow-top, innerspring mattress for even greater comfort.

Heating, cooling and audio can all be controlled from a redesigned sleeper control panel on the back wall, from which drivers can also lock their doors or activate panic alarms. And available working surfaces include an optional tray that folds out of the rear wall, and a dinette.

Up above, an optional skylight has also been introduced to help to lighten the interior. But every one of the trucks comes with a series of LED lamps. Four windows on the sleeper walls, meanwhile, open on hinges and can be covered with integrated window shades.

For those heading to the top bunk in a VNL 760 or 860, a telescopic ladder has been introduced. That replaces an earlier prototype for a sliding ladder that was found to snag in cold conditions.

One clear European influence is the use of the Globetrotter name for the premium sleeper package. That name has been used in Europe since Volvo introduced a raised-roof sleeper in 1979. Here, the VNL 760 Globetrotter will come with more brightwork options, premium interior, one of the top two levels of seats, and creature comforts such as parking heater, inverters, infotainment system, and premium mattresses. “A comfortable driver is a productive driver,” Spence says.

The truck series comes standard with the 13-liter Volvo D13 engine, while daycab and VNL 400 models can come with the 11-liter Volvo D11. Both of these proprietary models include features including wave pistons, designed to burn fuel more efficiently, and a common rail fuel system to more precisely deliver fuel and also cut weight and noise. The 15-liter Cummins X15 is also available.

Another option under the hood is the Volvo D13 TC (Turbo Compound) engine, which recovers waste heat that would otherwise be lost through the exhaust, feeding an extra 50 horsepower back to the crankshaft and improving fuel economy up to 6.5%.

The entire series of trucks comes standard with the I-Shift Automated Manual Transmission.

Some of the most obvious maintenance upgrades come in the form of engine access. The new VNL hood is 70 pounds lighter than its predecessor, and has also been mounted to the chassis and integrates splash shields which now lift out of the way. End caps on the three-piece bumper can be removed with a couple of fasteners, too.

Inside the cab, a single-piece floor mat has been replaced with four separate pieces. Fasteners for the panel that covers the doghouse can be accessed by removing just one of the floor inserts. “This is a first for trucking,” Spence says.

The interior trim accents are in a reflektor orange, offering a nod to the company’s focus on safety. But the commitment is reflected in more than color alone.

“Volvo Trucks built its reputation as the safest truck on the road by integrating a number of passive and active safety systems,” adds Volvo’s Wade Long, director of product marketing. “We’ve continued that in the new VNL series with several upgrades to make the truck even safer.”

Put another way, drivers will not be the only ones with their eyes on the road.

Those upgrades include a standard Volvo Active Driver Assist by Bendix — which combines a camera, radar, forward collision mitigation warnings and active braking. The system will detect metallic objects such as braking or stationary vehicles in front of the truck. If something is spotted, drivers are warned three seconds before impact. First a red light is reflected on the windshield. If the driver doesn’t take any action at speeds above 24 kilometers per hour, brakes are automatically engaged. Active Driver Assist also integrates with cruise control to help maintain following distances by reducing the throttle, applying the engine brake, downshifting the I-Shift transmission, and applying the foundation brakes.

It adds to the upfront cost, but Volvo notes that a typical truck averages 2.2 crashes per million miles, annually amounting to about US$24,000 per truck. Front-end collisions represent 31% of those. Crunch the numbers and the new technology is expected to save US$6,000 per truck per year, delivering a Return on Investment within four months.

“It’s not just about new technology but how we apply that technology,” noted Rikard Orell, director – product designs for Volvo Trucks.

The cab itself is made with a high-strength steel that exceeds the Volvo Swedish Cab Safety Test and ECE R-29 rollover requirements. The truck that already comes with a driver’s side air bag is also available with a new RollTek side air bag – something originally developed for emergency vehicles with a high center of gravity. If a crash occurs, the seatbelt tightens, seat drops, and airbag deploys within .25 seconds.

Other optional safety features include automatic lighting and rain-sensing wipers.

The new truck will be built at the company’s New River Valley assembly plant in Dublin, Virginia, while proprietary engines and transmissions will be made in Hagerstown, Maryland.

Production will roll out between September and November.