NASHVILLE, TN – The first new product has emerged in the wake of WABCO’s purchase of Laydon Composites, and it comes in the form of a self-deploying trailer boat tail.

The OptiFlow AutoTail, which has earned a SmartWay designation through tests by Canada’s National Research Council, automatically deploys at 70 kilometers per hour and closes at 15 kilometers per hour, drawing on speed data from the trailer’s Antilock Braking System. 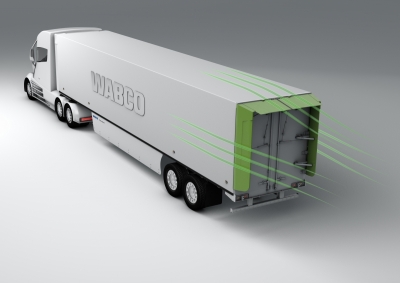 The automated opening helps to ensure that the potential aerodynamic benefits are always realized at highway speeds, while the closing will help to ensure the equipment is not damaged when a trailer is backed into a loading dock.

SmartWay tests show the panels can improve fuel economy by up to 4.3% at highway speeds, reducing carbon dioxide emissions by 4.8 tons per trailer per year.

The device differs from a competing system in several ways. Rather than using hinges, the panels use cantilevers to swing into place. They’re also curved, 21 inches wide, and made of injection-molded thermoplastic.

It was a rapid development process. WABCO purchased Laydon Composites in April 2016, and the Ontario company’s former president Brian Layfield – now WABCO’s global leader – aerodynamics – said his team had barely discussed the technology at the time of the sale. But now the business has the backing of a global company behind it.

“It’s been for me really rewarding going from three engineers. I now have the ability to tap into 2,400 engineers,” Layfield says, referring to available support and cost synergies. WABCO, meanwhile, is looking to maintain the group’s entrepreneurial spirit.

“In the end it’s all about getting out of the way,” says Jon Morrison, WABCO president – Americas. “We recognize what we know and what we don’t know.”

Laydon certainly understood aerodynamics. Answering a challenge presented by Con-Way, it developed a collapsible roof fairing that was inspired when Layfield watched his wife turn pot lids upside down so they would fit into a drawer. It became a standard offering on Freightliners.